Even if AMD’s Ryzen 3000 is actually already at the door and scurrying with the hooves, one still goes before. And that’s why I’m testing the MSI MEG Z390 ACE, a motherboard for Intel’s socket 1151 and ninth-generation CPUs. Even if MSI positions this board below the godlike, it is (also priced) rather oriented at the upper end of the food chain. Of course, you can find out in this test whether and how this has been achieved.

With the Z390 chipset, the MEG Z390 ACE as an ATX board supports the eighth and ninth generation Intel core processors (Coffee Lake-S Refresh). Native USB 3.1 support is already on board, so other additional chips can be omitted. The motherboard offers three PCIe x16 slots, but only one of them is connected to the chipset with all 16 lanes, while the other two are eight and eight respectively. even only four lanes have to cope. Of course, multiple graphics cards can be used at the same time (AMD CrossFireX and NVIDIA SLI). 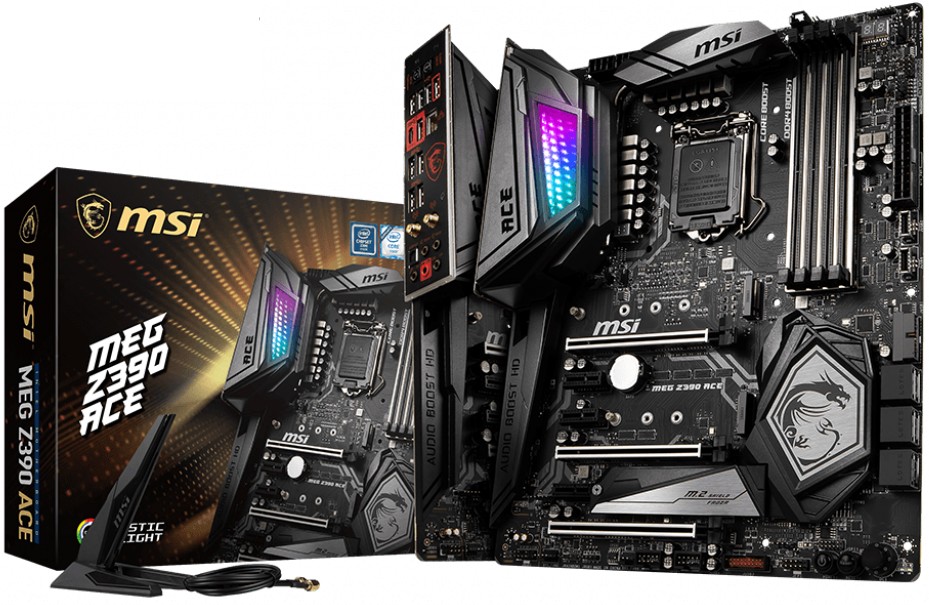 For additional plug-in and expansion cards, the motherboard offers at least three PCIe x1 slots. For hard drives and SSDs, the user finds SATA-6G ports and three M.2 slots, with two of these M.2 slots with four PCIe lanes connected to the chipset and supporting the NVMe protocol, which allows data transfer rates of up to 4 GB/s. The four DIMM slots support up to 64 GB of DDR4 memory in dual-channel mode. Natively, the Z390 chipset supports clock speeds up to 2,666 MHz, but the memory could still be overclocked up to 4500 MHz. 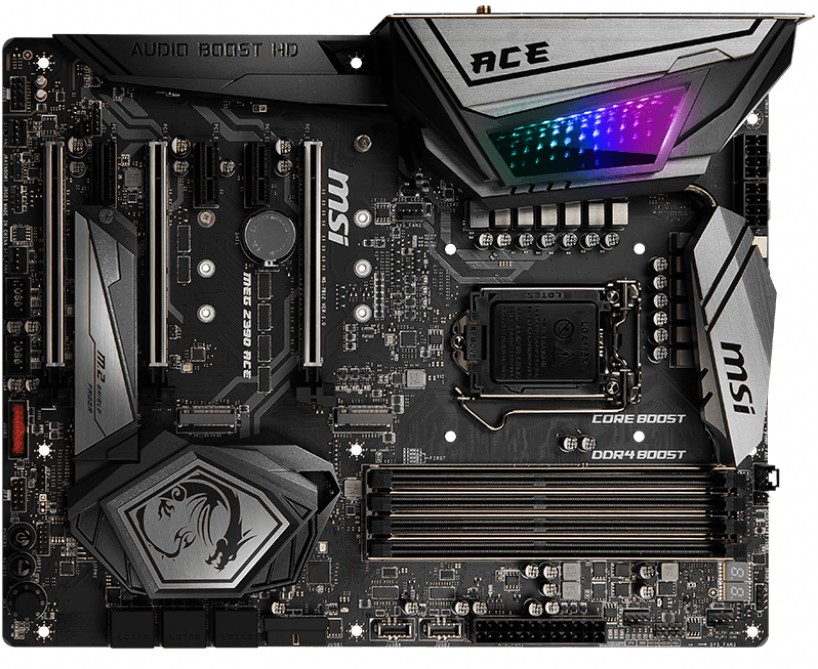 With the Killer E2500 Gigabit LAN Controller from Realtek, the motherboard offers a 2.5 Gbps multigigabit Ethernet port, with routers with NBase-T being more than sparsely represented on the market, which almost always makes the entire feature ineffective. Wi-Fi is of course on board, here you rely on the plug-in module with Intel’s Wireless-AC 9560 and two external antenna connections. But I’ll write a little bit later about network performance

At the I/O aperture, the MEG Z390 ACE has a USB 3.1 port with Type C below the RJ45 port for the Ethernet cable in addition to the normal Type A jack. You can reach speeds of up to 10 Gbps per port and USB ports with this standard often support the fast charging function of smartphones and tablets. There are also five additional USB 3.1 type A interfaces as well as four USB 2.0 ports, one of which can also be used for BIOS flashback.

The board has two RGB ports, one supporting the 12V standard and the second also addressing LEDs. In addition, there is the LED bar in the Shroud of the I/O-Shield, which significantly increases the luminous effects with mirror effects. 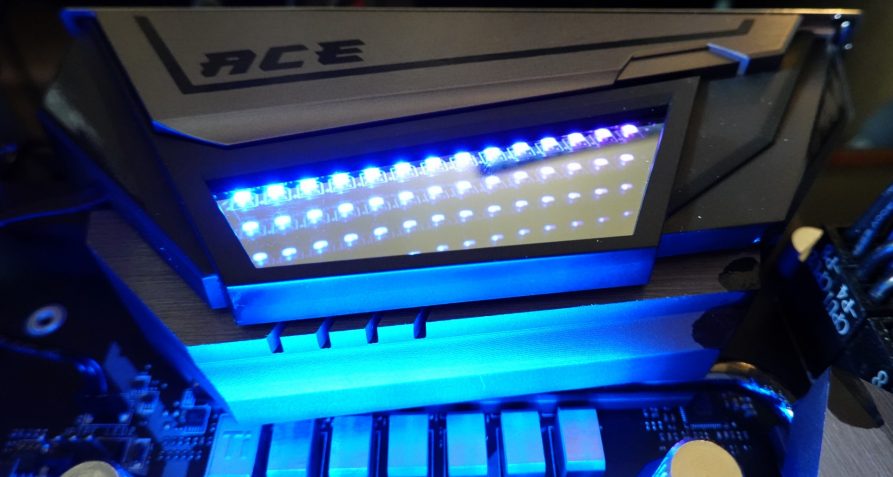 The scope of delivery is useful, but not lavish, whereby one should finally rely on flash memory instead of the DVD, which has become completely useless for many buyers. A simple USB stick should now be hardly more expensive than a pressed DVD and would be a real gain. The older SLI bridge has become overlooked at the latest since the introduction of Nvidia’s GeForce RTX and could actually be gone. The plug-in Wi-Fi antenna and a few cables complete all this. 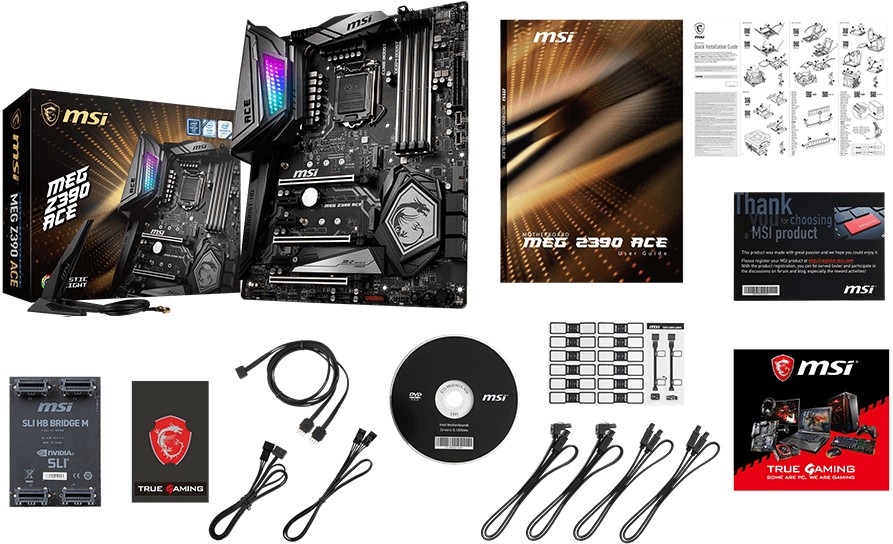 MSI relies on the long-proven BIOS interface, which also reacts quite quickly and is self-explanatory enough in both normal and expert mode. The OC button can be manually pressed on the motherboard, whereby you can also find enough presets in the BIOS. In general, manual OC in the BIOS is a good way to do this, because the settings are more clearly structured than e.g. gigabytes. You get all the important functions, even if some things could have been a bit more detailed.

With the appropriate software (optional), MSI also allows support to be on the PC and installation is also essential for RGB control. Whether you give yourself to these games at the end is up to everyone, because these settings are also free of any puzzles or stumbling blocks. MSI calls the whole thing “Dragon Center” and thus offers an egg-laying woolly milk sow that combines all functions under a uniform surface.

The best overview in this case is the data sheet of the manufacturer, which I have therefore linked to:

The Intel Core i9-9900K is used, which can gallantly lead any Z390 motherboard into the worst case when it comes to power supply and thermal performance at the limit. The whole thing is also perfectly cooled with a very high-performance water cooling system, so that there are always the same conditions. With a water temperature of up to 27 °C you can really live comfortably. On the Chiller I deliberately dispensed with this time. 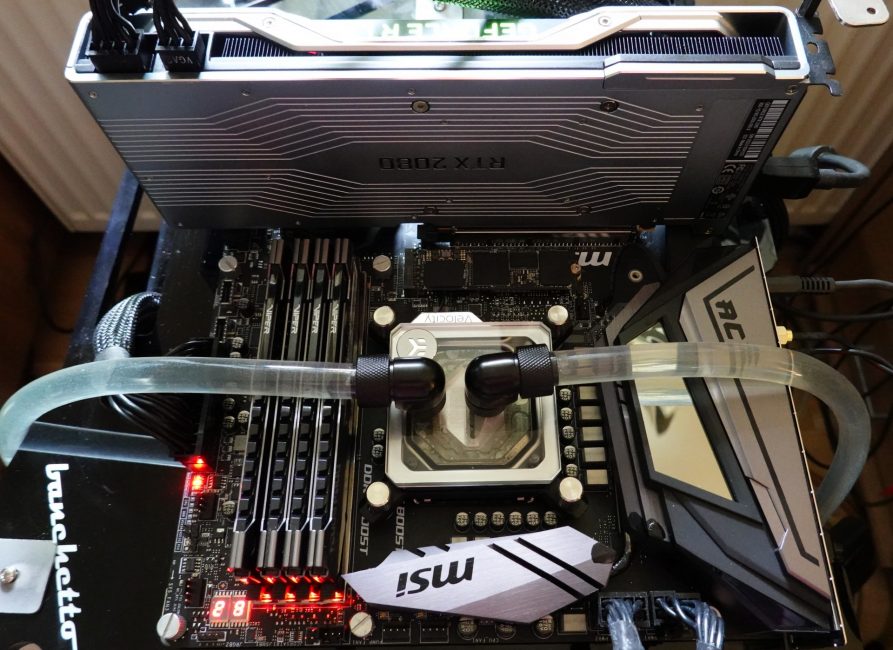 With RAM I rely on a solid and non-luminous (i.e. RGB-free) kit from Patriot in the form of the Viper Steel Series DDR4 , which I can run with DDR4 4000 using XMP2.0 (CL19-19-19-39 2T). The summary in table form quickly provides a brief overview for the interested person: