Today's PREVAILPRO P4000 is marketed by PNY as a mobile workstation and therefore also sorts itself in the relevant price segment above 4500 Euros and will be available directly in Germany in the foreseeable future.... Opening your notebook What would a notebook review be without Tear Down? On the one hand, the manufacturer does not list all components in detail (e.g. we lacked the exact information about the memory and the installed SSD) and on the other hand needed... System setup What do you actually compare to a mobile workstation, which is actually a normal consumer notebook with additional integrated, mobile Quadro graphics? The built-in Intel Core i7-7700HQ does not support ECC memory and a... Let's combine both CPU workload and real-time 3D graphics output. The emphasis is very balanced on both, as can be seen from the results, in which the actually nominally faster Quadro P4000 Max-Q all too often the afterlife... But we also don't want to be unfair and now we're still questioning what would happen if the Quadro P4000 Max-Q were to operate almost unchecked in the notebook. Then the dedicated Quadro P2000 has in part clearly changed the afterlife. Power consumption The power consumption differs very significantly during mains and battery operation. However, due to the lack of real modification options on the device, we can only measure primarily between the socket and the power supply on the primary side, we remain... Temperatures and clock rates The actual performance does not result from the ideal data of the specifications, but on what can be achieved in the real and warmed-up state of the CPU and GPU. That this is also the... PNY has done almost everything right with the PREVAILPRO P4000 Max-Q. The mobile Quadro P4000 in the Max-Q design harmonizes perfectly with the Intel Core i7-7700HQ. It is true that Kaby Lake as an architecture is no longer the very last s... 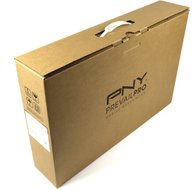 Today's PREVAILPRO P4000 is marketed by PNY as a mobile workstation and therefore also sorts itself in the relevant price segment above 4500 euros and will be available directly in Germany in the foreseeable future. A closer look at tooling and technology tells us that PNY uses the Taiwanese ODM Clevo as a contract manufacturer, with the PNY notebook based on the P955 as a platform, but equipped with oppulent. Because somewhere the price has to come from.

You get a similar notebook from PNY also as PREVAILPRO P3000 with a slightly weaker graphics unit and then also saves 1000 Euros. However, today's test will show that the combination of the installed CPU and the graphics solution harmonizes quite well. If so, because already.

In addition to the notebook, you will also receive the separate 150-watt power supply, a manual or the quick guide, a microfiber cloth for removing the fingerprints (very useful!), as well as a DVD and a USB stick. Their contents are more or less identical and with a notebook without a drive you could have omitted the DVD. 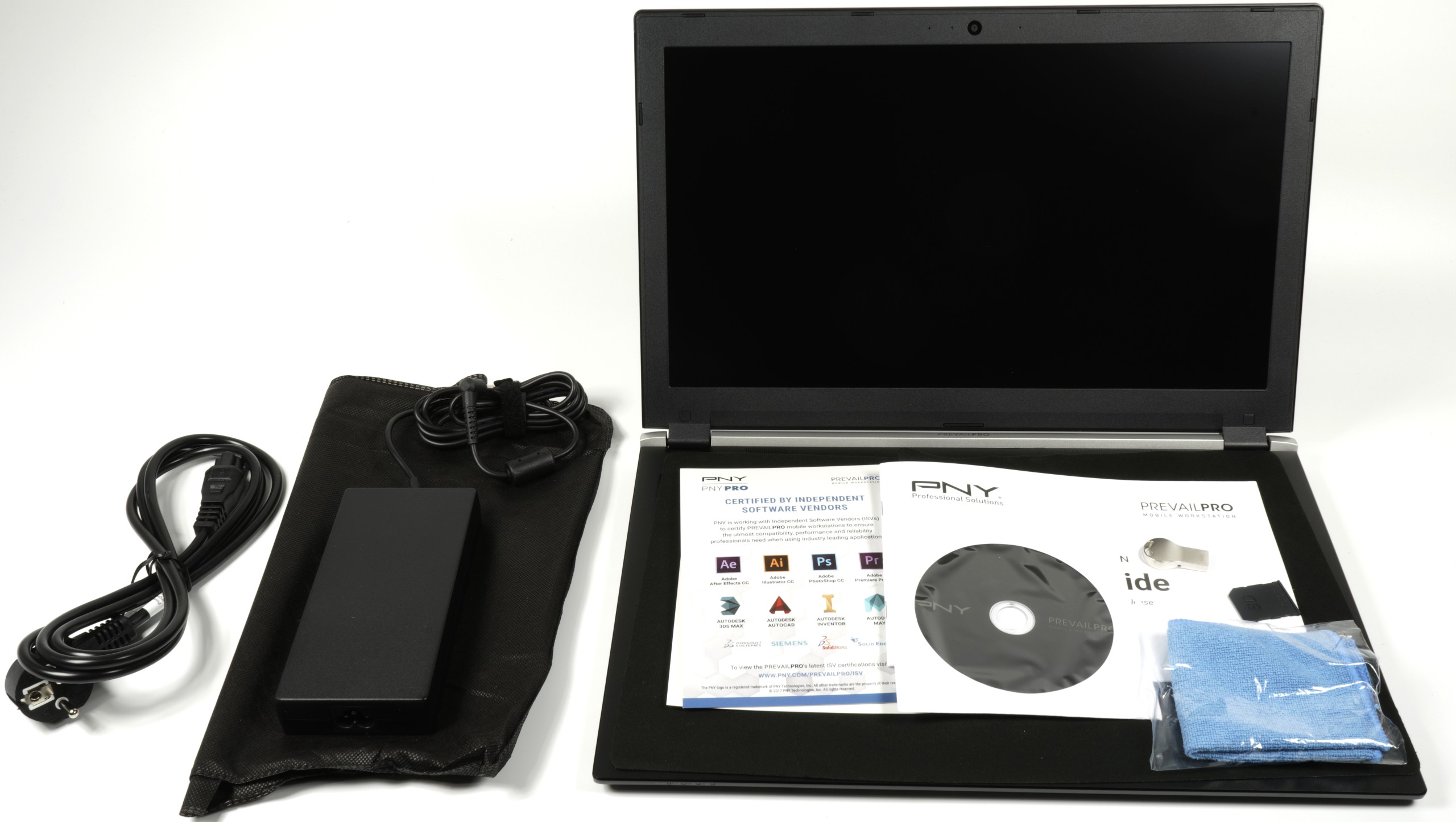 With a standard width of 38 cm, a depth of 24.8 cm and a height of 1.8 cm in the folded state, the notebook is in the good average of the 15.6" class. The weight of approx. 2.2 kilos already requires well-trained upper arms and, to be honest, there are quite lighter bolts. But somewhere the performance has to come from and haptically catastrophic plastic bombers don't have to be. 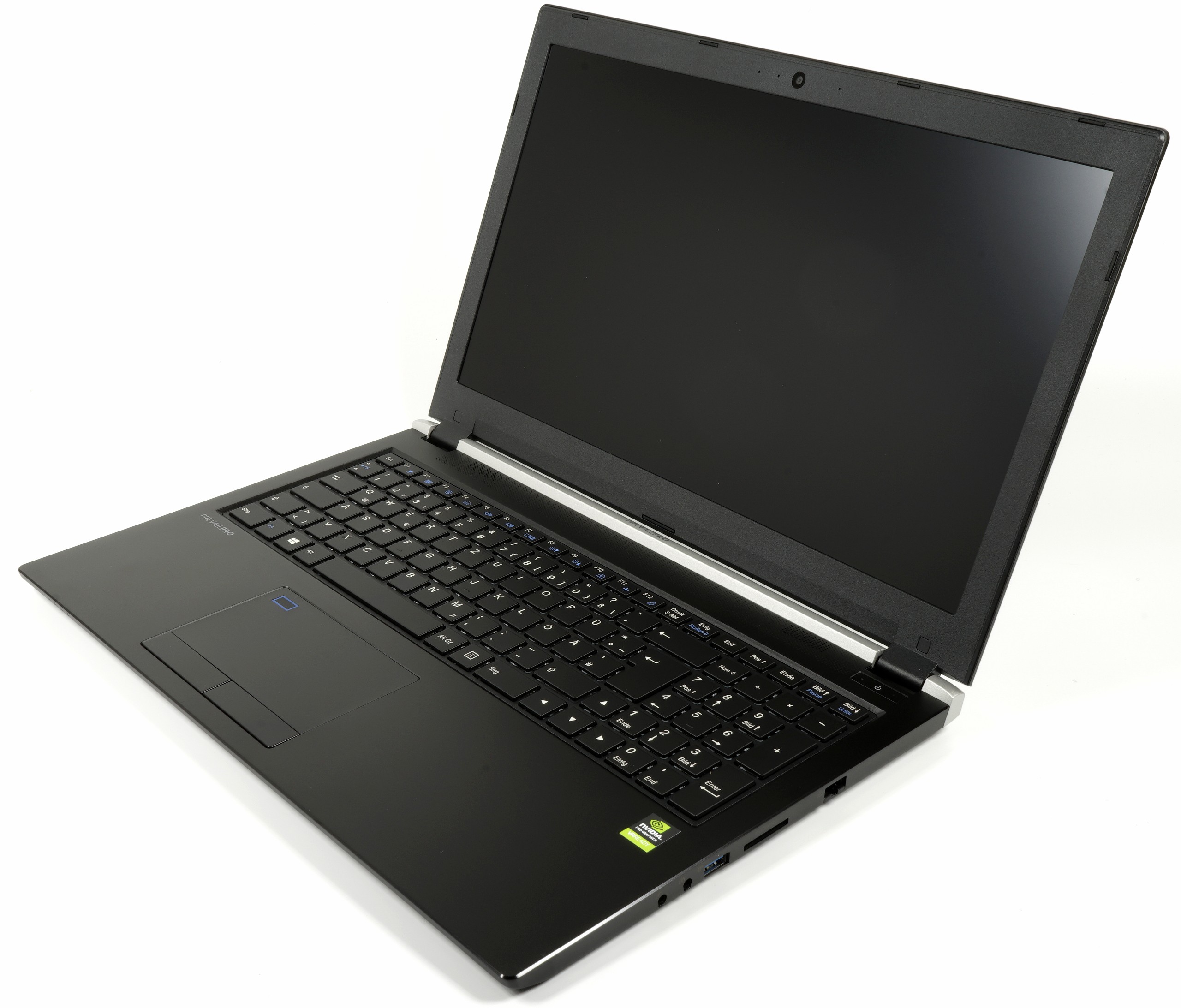 However, the entire metallic-matte surface from the lid over the base plate and the entire plastic surfaces inside is extremely sensitive to welded fingerprints.

With a few exceptions, the notebook is very much in line with the platform model. So on the left side (left to right) we find the opening for the security lock, the ventilation opening for the CPU cooler, the DC power connector, an HDCP-capable HDMI 2.0 jack, two Mini DisplayPort 1.3, two Type-C USB 3.1 jacks (Gen 2) and two additional USB 3.1 jacks (Gen 1). More is not really possible on this length.

The back is characterized by a total of three air outlets (two for the graphics unit and a passive air outlet for the interior) and the two folding hinges for the display lid.

The front is largely unoccupied and carries almost all status LEDs in the left area. Only the LED for the camera is located above the display next to the camera.

From left to right, these are the status LED for the operating status and mains operation, the battery, the disk activity, and the airplane mode in the front.

Connectivity, of course, also includes the built-in Wi-Fi module. With Intel's Dual Band Wireless-AC 8265 (M.2 2230) you are quite well positioned. Right next to the Fritz! Box 7590 we reached a maximum of 674 Mbps, the range and data rates within the laboratory correspond to those of a decent Wi-Fi USB stick, whereby internal antennas of course also bring ranges disadvantages. We could not find any real connection initiating and aborts.

The Ethernet port is good average and does what it should do without any criticism. In addition, the OEM relies on Bluetooth 4.2 (M.2 2230, Windstorm Peak), which of course rounds off the connectivity, but also eats away at the battery if you don't need it.

The two built-in speakers are sufficient for a workstation, but you shouldn't expect sound wonders. Creative's built-in sound solution in the form of the Sound Blaster X-Fi BM5 supports high definition audio and also provides ANSP 3D sound at the audio output. With head-to-head listening, it all sounds quite nice and you can once again notice the roots that are more to be found in the gaming sector, because the board is almost equally stocked with all these platform derivatives.

The keyboard relies on the usual short-stroke keys used in notebooks for ages. The configurable backlight is quite nice, but it is also an inherited feature of the source platform rather than an absolute necessity. The fixed position in keyboard input and the use of the touchpad is achieved by large-scale rubber applications in the lower shell of the housing, which are relatively soft. More about the keyboard right now in the Tear Down.

For the display, PNY still relies on a matte Ultra-HD IPS panel from LG Philips (LP156UD1-SPB1), which creates 60 Hz, but is actually no longer really up-to-date. Unlike pure RGB panels, this RGBW panel relies on a subpixel array, which can have some effect on contrast in some situations. Especially black areas are not deep black. The dreaded backlight-bleeding also occurs in a milder form, but these spots are rather limited to the four corners, as well as areas of the upper and upper. lower edge of the display. Depending on the slope of the display and the screen content, this is more or less noticeable, but is to be endured. The maximum brightness falls in mains operation with approx. 260 to 300 cd/m2 sufficiently high.

An AUO B156ZAN02.2 will be installed in the retail models, which will be available from next week. These AHVA panels are then an RGB panel, as is already used in some consumer models of Clevo. The Key 15 of the German notebook forge Schenker is mentioned here as an example, for which we will also publish a test shortly. The 92% of the sRGB color space is fine, but approx. 62% of AdobeRGB is more satisfying in this price range.

This is nuptular for hardcore gamblers, but it looks pretty good and can be quite exciting in workstation use if you don't use software whose GUI doesn't support the font scaling of Windows and which doesn't have its own scaling option. has. Then the use quickly becomes for searching for microscopic hieroglyphics. 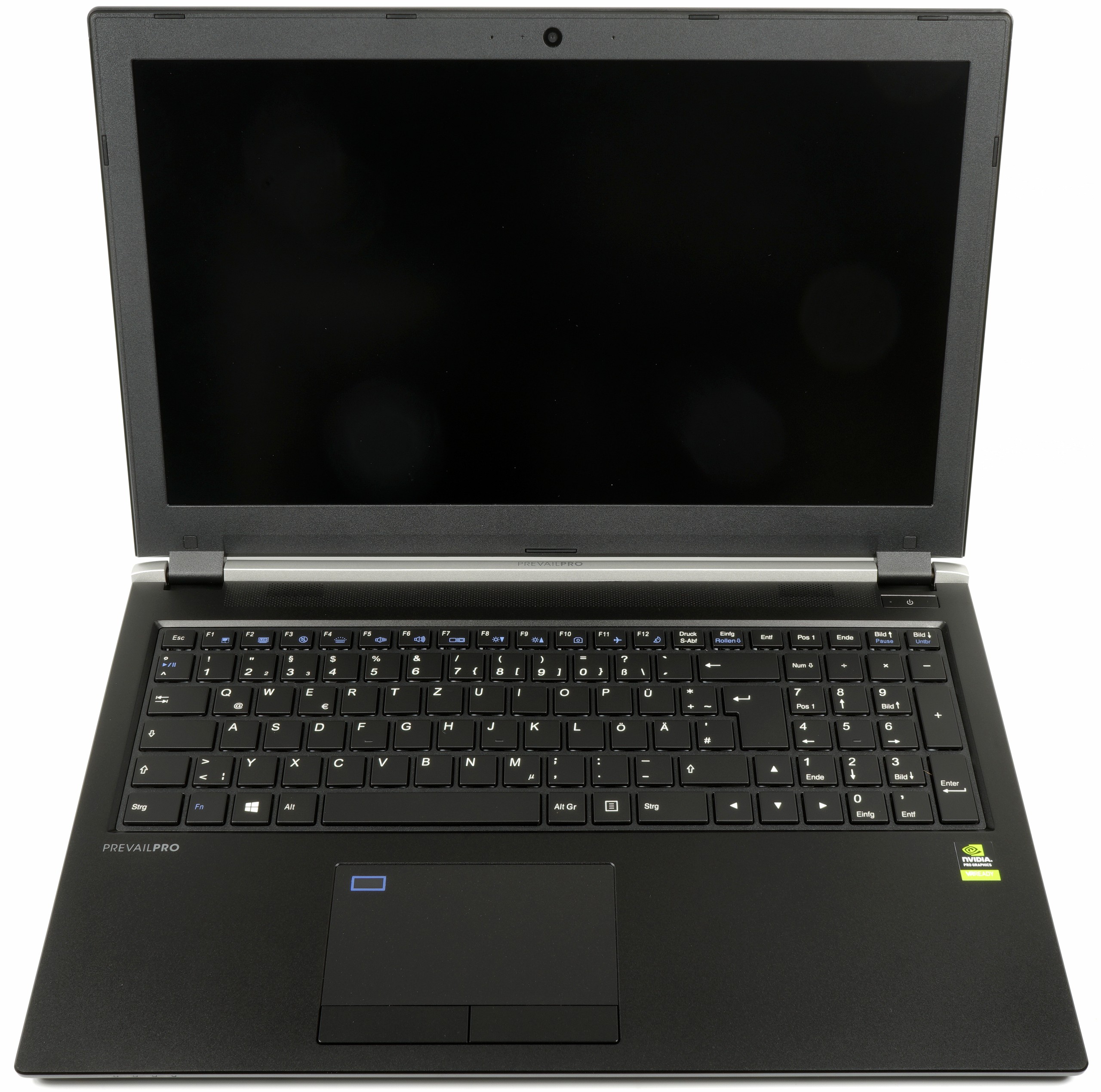 By the way, you can open the display up to 130 degrees. Is loose and does not leave the construction in a tilting mood.