What do a cooling unit and a keyboard have in common? Both can be quite cool and come from the same source. Or that press employees may well be employed in metalworking. But before we have too many M... Keycaps Topre relies on polybutylene terephthalate (PBT) for the keycaps, which of course also underlines the premium claim in the end. This very special plastic is a very brittle material in itself, but it is very high in temperatures.

What do a cooling unit and a keyboard have in common? Both can be quite cool and come from the same source. Or that press employees may well be employed in metalworking. But before we have to throw too many coins into the pun box, we prefer to clarify the uninitiated.

Relatively little is known about topre switches in this country, although the fan base is growing slowly but continuously. But behind Topre is actually the Japanese company Tokyo Press Kogyo Ltd., founded in 1935 (and renamed Topre in 1985), which at first glance, as a former press and die-cutting plant, actually seems to have nothing to do with mechanical keyboards. But the appearance is deceptive, because already in 1983 the production of electronic devices began and in 1990, only logically, also with office accessories.

This year, the first professional keyboard developed by Eiiti Wada, which was primarily aimed at UNIX users, will also be used. At the time, Eiiti Wada had nothing but the perfect keyboard in mind, which was consistently limited to the essentials, so that space was saved and could also be operated as error-free as possible. By the way, if you are interested in the whole story (since the whole thing leads a little too far away) you should refer to this link.

With the Happy Hacking Keyboard Professional 2, PFU Limited (i.e. Fujitsu) is now continuing its implementation as a modernized new edition, which was already started as a cooperation and is now also opening up to PC and Mac users in terms of content. Exclusivity, of course, also has its price in the end and so, as with high-quality irritant underwear, for a touch of (almost) nothing, the biggest prizes are called. Less is more, even in the shopping cart. Well, yes… 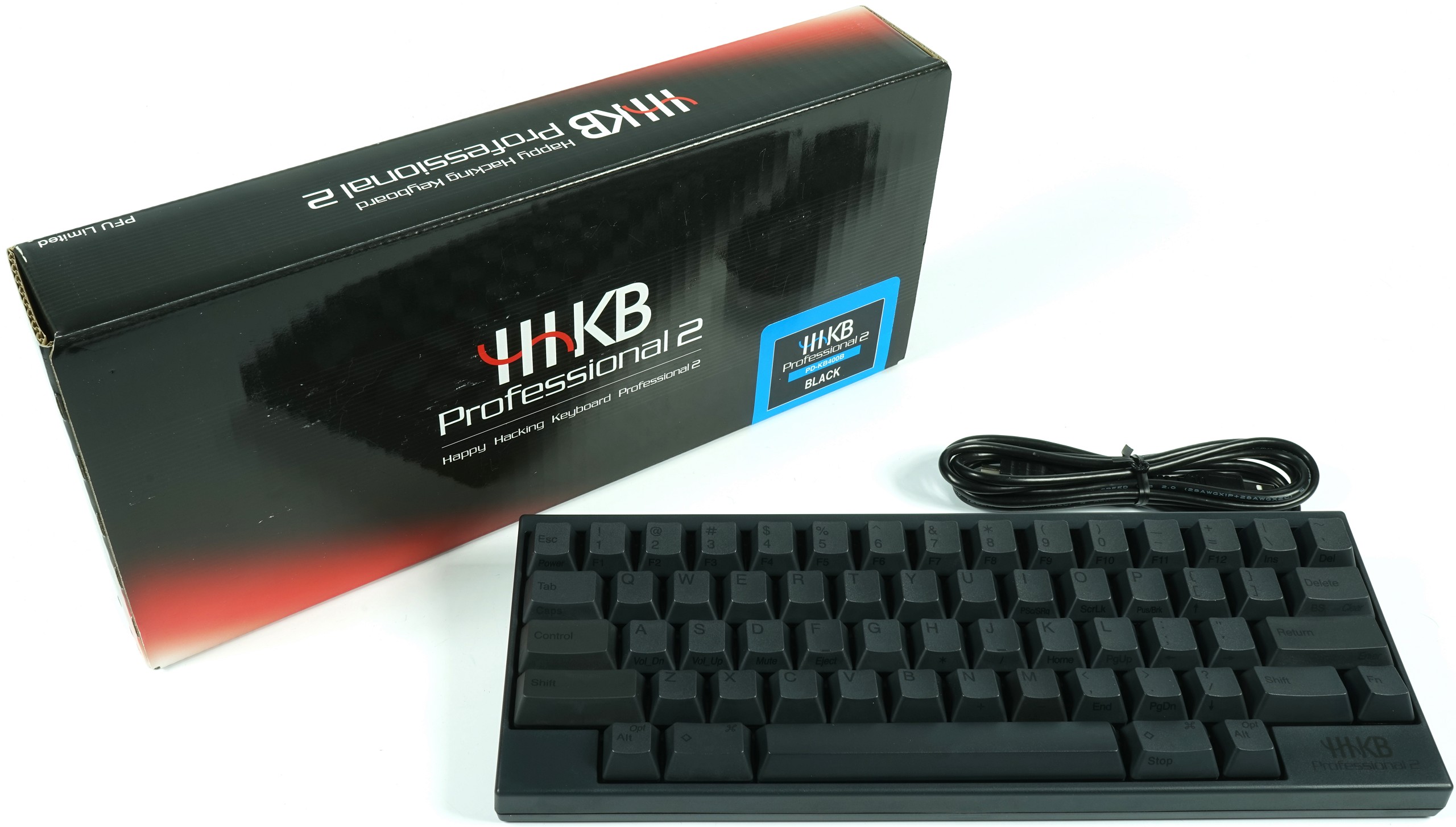 Accessories are rather manageable. A simple mini USB connection cable, which is only 1.8m long, and the keyboard with a thin handbook are all you can take from the otherwise not exactly voluminous packaging. But as is so often the case, the inner values also count, because the weak part has it faustdick behind the ears.

Simple, anthracite-coloured plastic on the entire line: the keyboard does not offer more than a matted upper and lower shell made of ABS. Optical gaming attitudes are as frowned upon on the entire width of 29.4 cm (at a depth of 11 cm and a height of only 4 cm) as such outrageous things in the form of an RGB backlight or a bright logo. Whoever has, does not and does not have to put it in the eye of the whole world or laser blue.

The key arrangement in the minimalist Sun Type 3 layout shrinks the width and together with the labeling in sublimation technique results in a rather monolithic-looking key-crater landscape, which almost looks like a piece of polished. Later, every pinched pizza bread automatically becomes an optical counterpoint and significantly increases the net weight of only 530 grams ex works.

The manufacturer finds the whole thing plentiful "crisp", but something the PR has to write in the end. Apparently, it is mainly the material of the keycaps and the type of label ingesstep that we will come back to in a moment.

We would call it rather excitingly unexcited, which probably hits the core at least as well and also associates an almost unlimited durability. Because where nothing has been spoofed senselessly, (almost) nothing can break. In this respect, of course, we also looked inside during the course of the test. 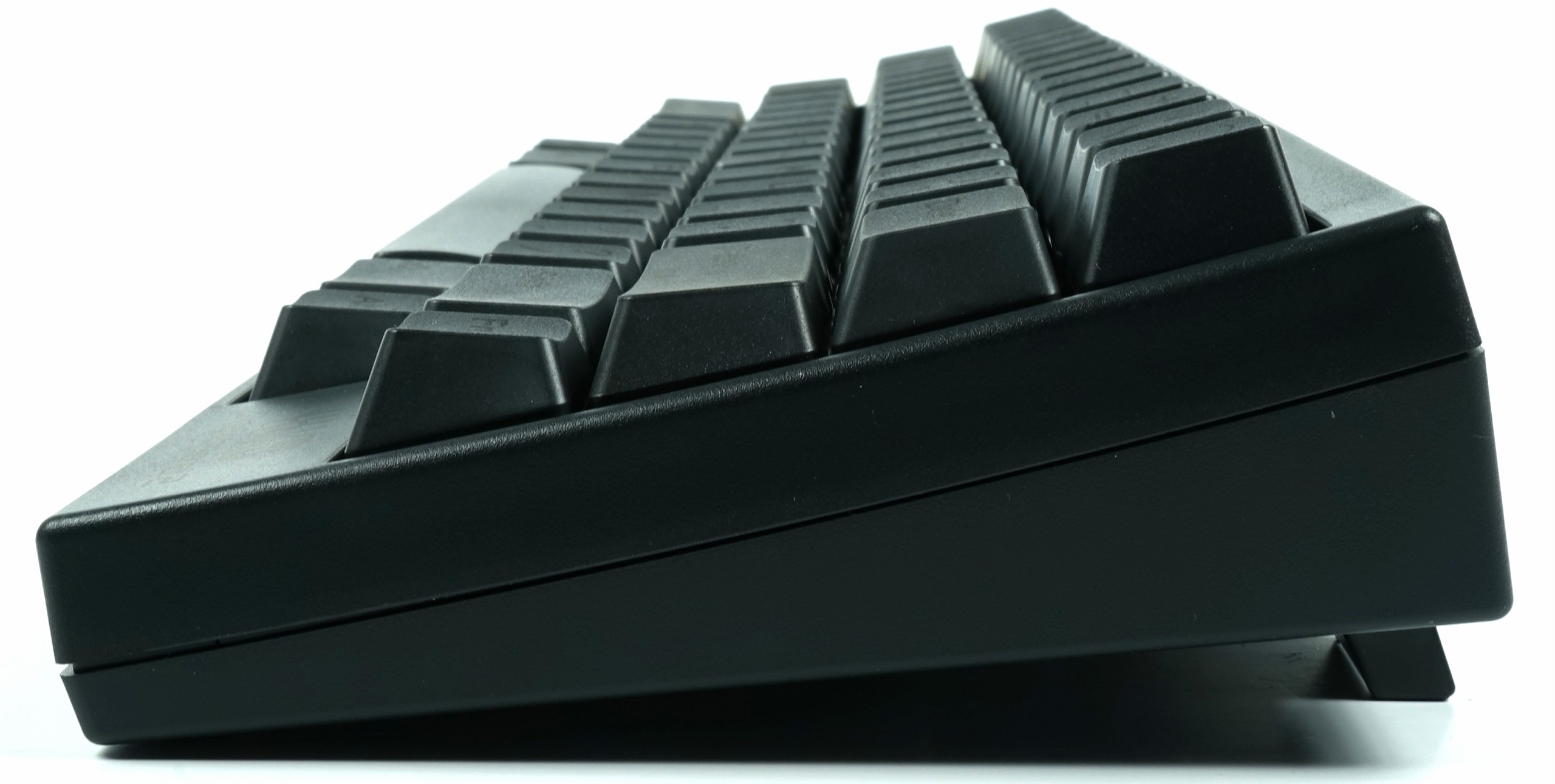 The side view shows the still valid arrangement of the individual rows, including inclination of the keycaps and distances between the individual keys in the US ANSI layout, which are relatively large due to the only 60 installed copies. Typing (almost) impossible.

The lower shell is hung on one side with three noses and fastened on the other with three screws. A carrier plate is not found inside, only a FR4 carrier board screwed to the upper shell with the attached and carried out at the front topre switches.

The two-part displays are simple but effective. Depending on which part has been folded up, the pitch angle also increases. The very heavy-handed snapmatism is not ideal for studio-maintained long nails, but certainly against accidental folding. The usual rubber parts, i.e. rubber Deposits against a possible slippage, however, are not even available at an extra cost.

The variety of connections is limited to a mini USB 2.0 input, which allows you to connect the keyboard to the output device. At the same time, the keyboard still functions as a USB hub, which offers two USB 2.0 outputs.

The whole thing is realized on the controller board with a RENESAS .PD720114. On this board, which sits on the lower shell and is connected to the main patine by means of a flexible connection cable, also finds an M38K07M4LHP from RENESAS.  This is an 8-bit microcontroller with fixed value memory, which can also be found in simpler Yamaha keyboards for the leisure musician.

Since one proceeds in the end rather minimalist, the keyboard is of course denied the tricky NKRO via a multi-device-capable firmware. A single installed device for the keyboard input must therefore be sufficient, resulting in an honest 6KRO. More than six keyboard feedbacks cannot be transmitted at the same time, although the logic used does not make the keyboard more inclined to ghosting or jamming effects. That would remain on the credit side in the end.

The "PD720114" allows the simple hub of two USB ports, for which a load capacity of 100 mA each (500 mW) is given. This is hardly anything for current bling bling gaming devices with 1001 LED, but is also enough for normal mice or simple card readers. On the picture we also see the dip switch, which we will discuss in more detail.

But back to power consumption. The keyboard itself requires an astonishingly sufficient 400 mW, which translates into a current of 80 mA. This would theoretically allow as much as 200 mA per stroke instead of the specified 100 mA, but the used .PD720114 (theoretically) as a 4-channel hub allows only 100 mA per channel, no matter how many channels are used or lie idle. However, we were able to load one of the connections stable even with 300 mA, without any instability, as long as the second connection remained free.

Before we go to the highly interesting topre switches, the key caps and the interconnection or Modification come, once again quickly all technical data at a glance: