Surely it would be unfair and hateful if AMD, as with the Vega Frontier Edition, were simply to imply that everything that does not make it to the top positions in gaming is simply as a productive hardware for the so-called prosumer (often also content creators). and then simply basks in a newly created niche on the self-created top spot.

In the end, the calculus and method behind the current strategy is quite important, even if you may not recognize it at first glance, even though the whole architecture itself is quite conclusive. Life isn't just about gaming, it's also about it. Ryzen Threadripper is actually a kind of wanderer between the worlds, which is definitely not without charm.

All those who do not (only) play, together with the X399 platform, are offered a rather high-performance working environment, which leaves nothing to be desired in its mix. Not even in terms of price, but that doesn't mean AMD has to sell under the same price. The fact that Intel has reacted here in the meantime shows once again how seriously one can, even must, take the current processor family. 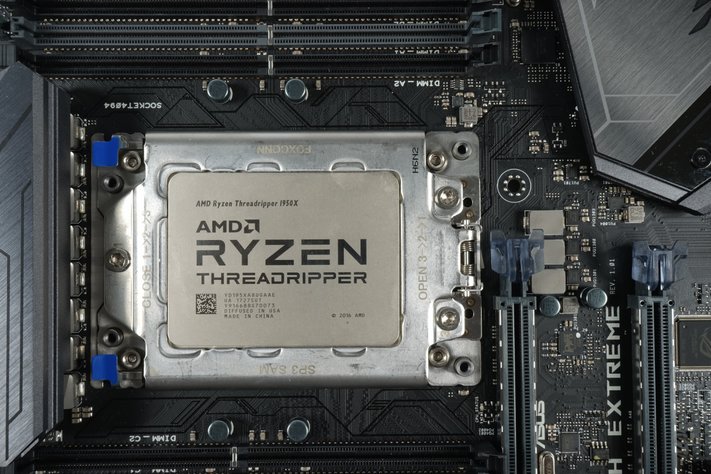 But all the euphoria about the core flood doesn't mean that the Ryzen Threadripper could now be recommended to anyone without restriction. The only gamer, who as an enthusiast is on the hunt for the highest FPS values from early to late and does not have to look at the money, will bite into the table edge disappointed, because that is exactly what the Ryzen Threadrippers do not offer.

Conception, architecture and positioning stand in the way of this. But what also clearly shows us that current games, at least as far as the CPU is concerned, still lag far behind the current technical possibilities. The almost exclusive fixation on graphics cards may be one of the reasons, the necessary effort to completely redesign engines while remaining mass compatible, another.

Which brings us to our assessment. Ryzen Threadripper can do one thing really well: work. When it comes to many tasks that are as parallel as possible, be it video encoding or rendering photorealistic content, Ryzen Threadripper is the first choice if the application used is not completely fixed to Intel features. and has been compiled in this way. And if several applications have to run in parallel? All the better, because exactly then both Ryzen Threadripper swell to the high form.

We played Mafia 3 on 4K in our own attempt, at the same time re-encoded a long 4K video with Adobe's Media Encoder and also run a virtual machine, which we could access via remote desktop. Everything went more or less without problems! And it is precisely in such a moment that the sense or nonsense of such a CPU opens up to you. But only then.

And it is precisely this limitation that makes us award the award specifically for the target group of self-declared multitaskers, because only they will be able to understand what Ryzen Threadripper can fulfil. Pure gamers don't find what they're looking for here, but they shouldn't. Last donkey vs. City speedsters or racing cars – life in categories can actually be quite simple. Especially since the price is still right.

The 1000 Euros for the Ryzen Threadripper 1950X as a real 16-core are a battle announcement to Intel and also to the inner self with the must-have addictive factor, which irons out all financial concerns with a gesture of nonchalance. But even the slightly higher-clocking Ryzen Threadripper 1920X with the remaining 12 cores will surely find its customers for the colporting 800 Euros. Thus, the price additionally separates the mass of players from the mass of cores and threads, whereby hardly any current games can benefit from such an expansion. So from this point of view, AMD has done a lot of things right and hardly anything wrong. Congratulations!