We determine the performance values of the package in a special sensor loop, i.e. exactly the value for what is absorbed by the CPU in terms of power and then almost completely returned to the cooling system as heat (power dissipation). To check the plausibility of the read-out sensor values, we made random shunt measurements and measured the total power consumption at the EPS supply connection (current pliers and voltage measurement).

What is read out by the voltage converter of the motherboard as a CPU value (HWinfo64) is to be regarded as sufficiently accurate, even if the measuring intervals are greater than in our measurement on the oscillograph. To stay fair, we also measured the Intel Core i9-7900X once again in overclocking at 4.5 GHz and recorded it in the graphics.

We must point out that the Ryzen thread rippers also use different partial voltages for the SOC/SMU rails for different clock rates. If you evaluate the performance of the entire package, these partial voltages, which depend on memory clocks, also have a big influence on the values determined! AMD had advised us to operate the 32 GB as DDR4 3200 within the scope of the stored profile. However, if this memory were operated with the standard SPD values of DDR4 2133, the power consumption for the package would be at least 15 watts lower!

Furthermore, both CPUs are designed for a power consumption of up to 180 watts at the default settings. However, if the memory is overclocked, the CPU will be missing exactly this approx. 15 watts in the power window, which of course can also affect the performance on a case-by-case basis if you use all cores to the full and thus get too close to the upper limit!

The power consumption in the idle is slightly more than twice as high as with Ryzen 7, but it should be remembered that both thread rippers have two these times in comparison to Ryzen 7 also higher clocking as soon as isolated loads occur. In the overclocked variants, the higher voltage also comes into play. We just wrote something about the store. For example, with DDR4 2133, the Ryzen Threadripper 1950X would only be at approx. 32 watts. 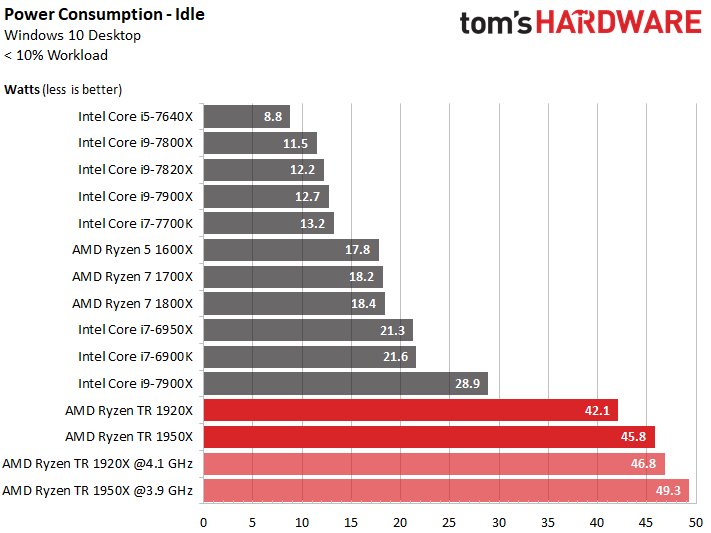 AutoCAD 2016 rarely uses more than two to three processor cores, usually only one, but quite intensively, in the usual work and output in the model and paper space. Therefore, it is not surprising that the power consumption only increases by a maximum of 15 watts compared to the idle, which is not a real idle. Nevertheless, the values of the two overclocked variants are another 14 watts higher, so that a difference of almost 30 watts can be recorded again for the idle. And then there's the memory… 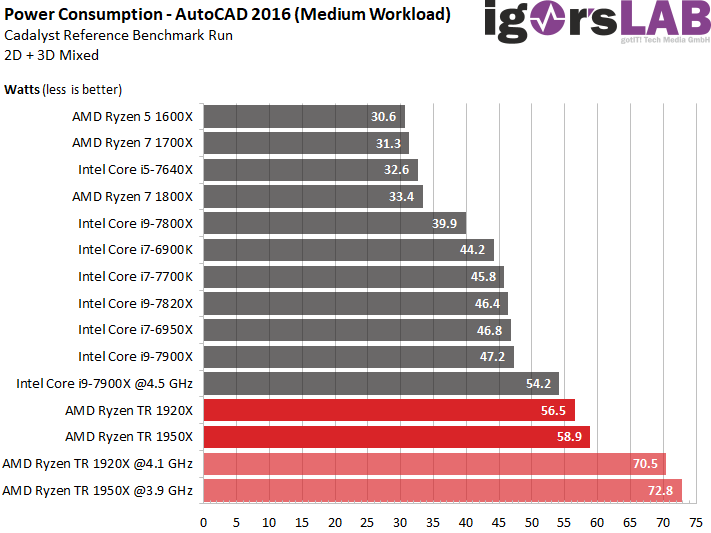 The problem with gaming is that the many cores are mostly in each other's way and the overall performance is not so outstanding. The power consumption in the non-overclocked state is comparable to that of the Intel Core i9-7900X, even if its gaming performance is significantly higher. There are also parallels to the 3D real-time performance of the CAD applications we test. 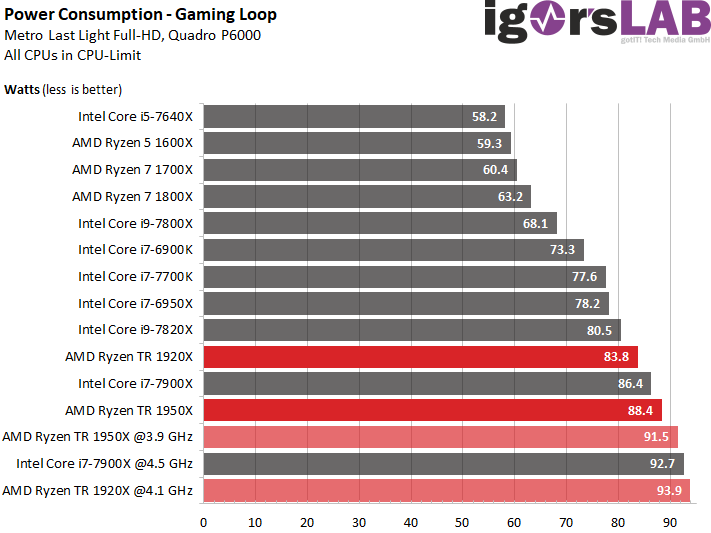 The stress test opens all the locks, especially for the overclocked variants. However, in order to save the honor of the Core i7-7900X, it must be noted that the high power consumption in the non-overclocked state is causally at the expense of the motherboard, which does not lower the clock rates in accordance with the rules, but leaves a lot high . see also our article about the problem of the Core i9-7900X on the X299 motherboard).

Both Ryzen Threadripperhavehavehave have nothing to fear here, because the Asus X399 ROG Zenith Extreme covers the power consumption in the default settings to 180 watts. This only becomes much more extreme if you manually overclock to get the maximum clock frequencies out. At 1.425 volts for the 4.1 GHz of the Ryzen Threadripper and the 1.35 volts for the larger 1950X for the 3.9 GHz, the final result looks as expected as we know it from the overclocked core i9-7900X, which at 4.5 GHz on all cores at about the same level. beyond the 300-watt mark. 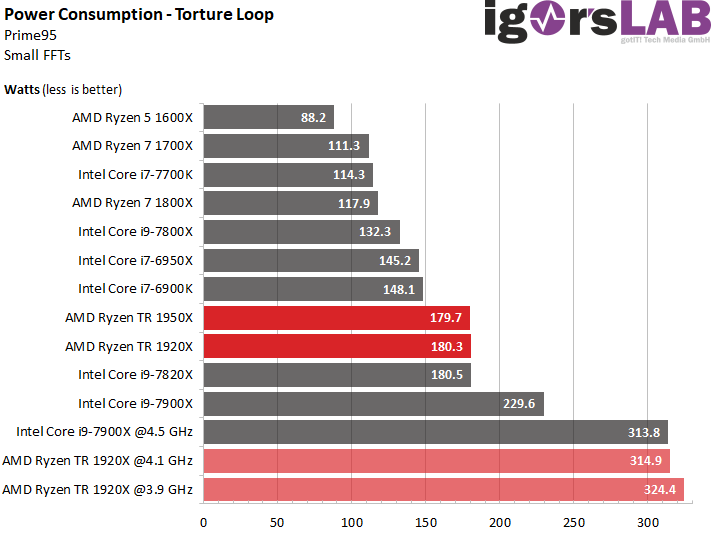 The fact that two almost identical dies in the end even absorb more than twice as much power in places as a single one is due to the nature of the adjacent load. This is to be expected when all cores are fully utilised. In addition, at least with the Ryzen Threadripper 1920X we were able to exceed the limit of 4 GHz stable and to be able to use all 24 threads in a targeted manner at 4.1 GHz. As long as well-parallelizable tasks are completed and the compiled applications fit, the high power consumption is again relativized by the delivered application performance.

Gaming efficiency, on the other hand, is significantly lower than skylake-X's. This is where the Intel CPUs get the much higher IPC to their aid. A large part of the recorded extra power of the Ryzen Threadripper is also at the expense of the so-called "basic noise" of the CPU, because already in the idle it is already about the 15 watts, which one absorbs more power. If this were to be calculated in the gaming loop, for example, the Ryzen Threadrippers are suddenly not so bad, because the then lower increase in power consumption compared to the idle is also in proportion to the lower Gaming performance.