In order to better understand some of the later results, we are putting forward a good old acquaintance. With our GDI/GDI+ benchmark, we are first testing two different output methods for 2D objects, as found in older applications and print outputs, and how it is still used today in the same or modified form for the display of the GUI. However, it is very easy to use the throughput when writing directly to the device or the storage performance during handling in a huge DIB.

First, let's consider writing directly to a device. Here, the graphics driver uses the CPU very extensively, but mostly only with a few threads. After all, since the introduction of the Unified Shader architecture, there is no real 2D hardware acceleration and the Windows driver model is also a real brake in this regard. 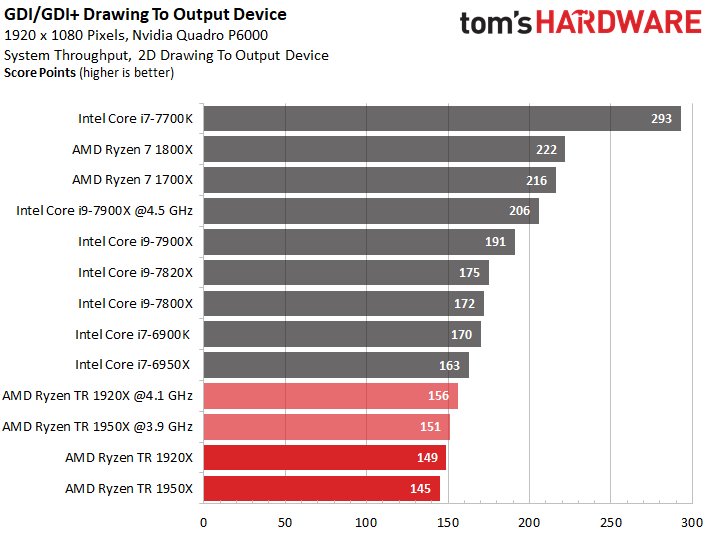 Now we bring the memory into play and use the only remaining 2D function in hardware: the direct plotting of the functions in the stores, the subsequent copying of the graphics created in memory to the output device. We complete exactly the same sequences, but draw first into a virtual bitmap and not on the monitor. First we blew the complete graphics to the output device. Even if the current CPU usage is slightly higher, because the bottle neck of the rest of the system is omitted, the result is somewhat astounding. The Ryzen Threadripper dominate everything, even the otherwise almost unbeatable Core i7-7700K. 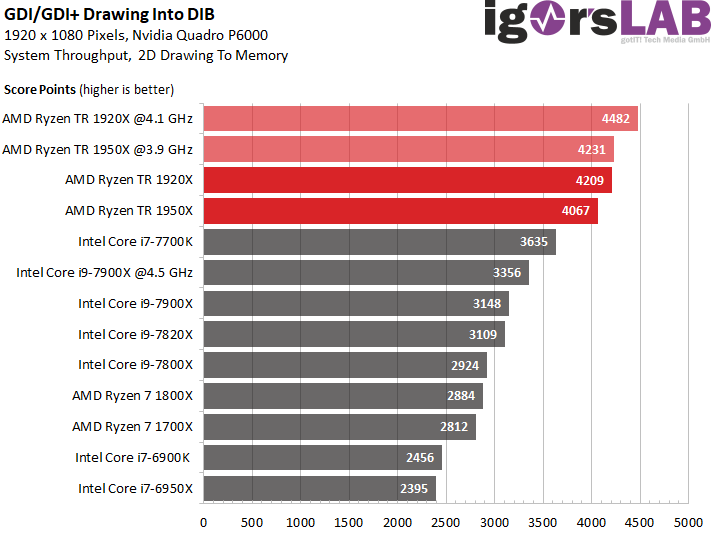 We are now comparing our own benchmark with AutoCAD, although directX is used here. But this program does nothing else when drawing than to recreate every single drawing function in software first. However, since the IPC is more important because AutoCAD scales poorly over the core count, the result was predictable. 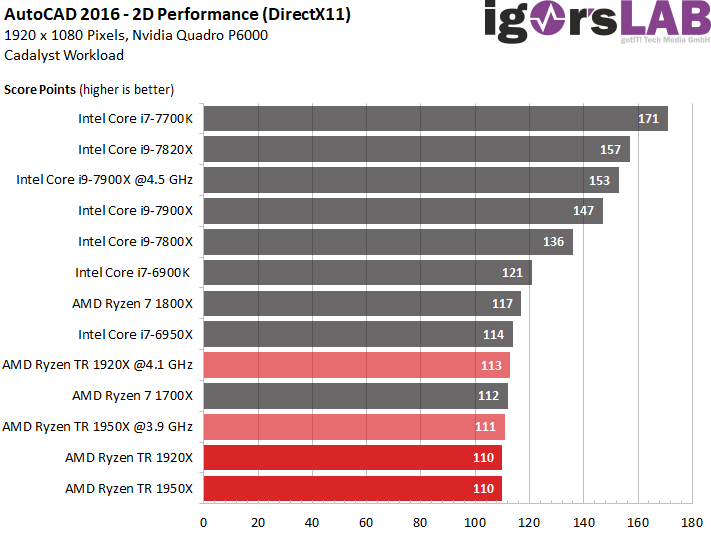 Many of the professional applications in the development area have been optimized and compiled specifically for Intel CPUs, which you will of course also notice in the overall performance. In spite of everything, we cannot and do not want to exclude them in terms of the overall picture, but at the same time it should be an incentive for the developers to focus more on AMD and Ryzen, as well as to openly openly open lyses themselves and the users to both options. Keep. this also applies to better multi-core optimization, as far as this is reasonable and possible.

Clock goes before core count, with Ryzen 7 and Ryzen Threadripper quite close together. Since AutoCAD relies on DirectX, but is hardly multi-core optimized, it is also very close to the game results of many older titles. 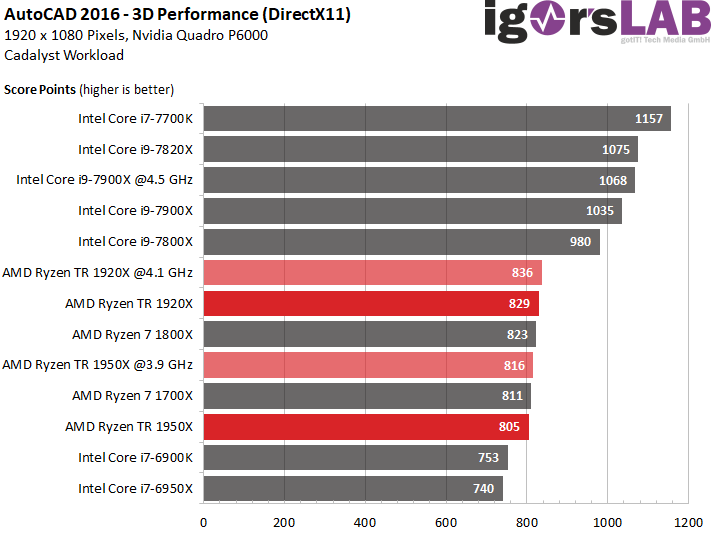 With The OpenCL benchmark from Cinebench, we also see what to expect if software has not been optimized for Ryzen. Clock is close to core, with Cinebench remaining an Intel domain in the OpenGL benchmark. 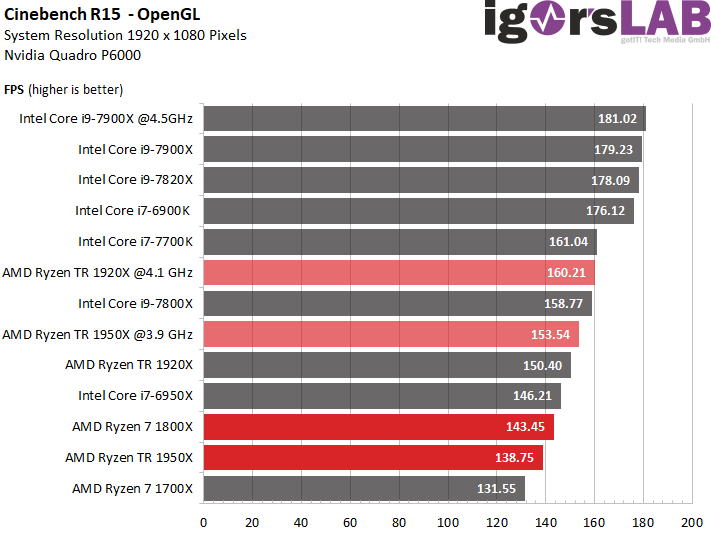 The same applies to Solidworks 2015, where even a Ryzen Threadripper 1920X overclocked at 4.1 GHz is shortened against a Ryzen 7 1800X. If you change the memory access options in the BIOS, there would be at least a tie. But then most computing tasks would be at a disadvantage. Either-or, it is and remains a difficult decision where to set your priorities. 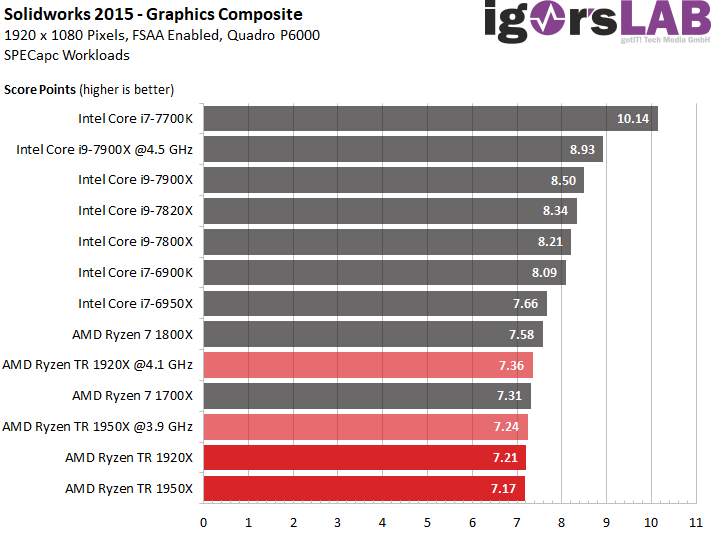 Creo provides a similar picture, whereby here, at least with the Ryzen Threadripper, the core number dominates a little over the clock. Nevertheless, they remain at the end of the 3D food chain. With optimized BIOS options, it would be enough, at least for midfield, but then the CPU composite would look a little worse again (see next page). 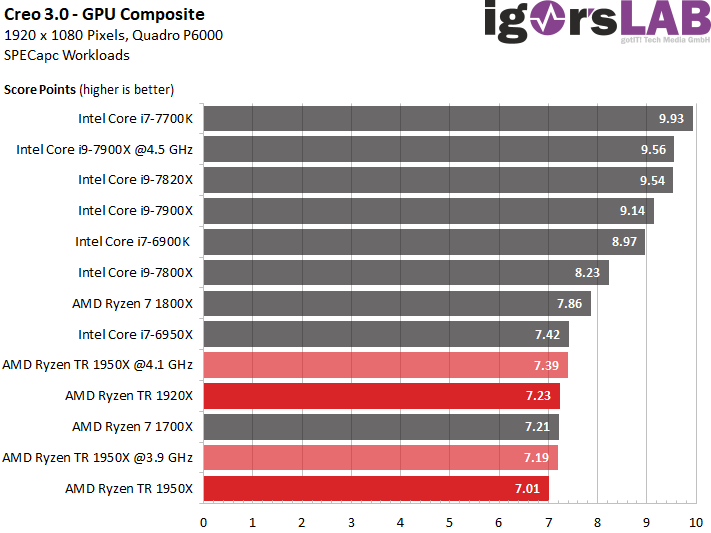 If you leave out the Core i7-7700K, the result in Blender is acceptable. Together with the superior rendering performance (see next page), the result is a very positive assessment. 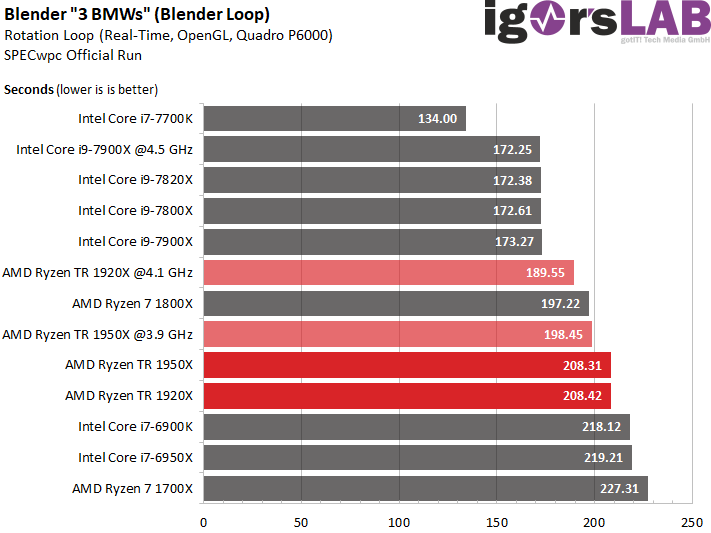 For the graphics output literally dead-optimized, the benchmark from the free SPECviewperf-12 suite draws a pretty good picture, at least for the CPU performance. What has been written several times applies: Clock is everything. 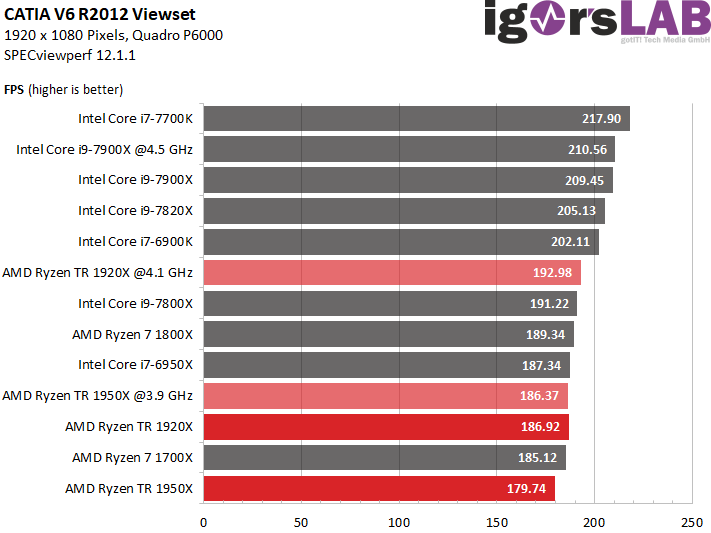 Finally, the same applies to Maya, where the entire output in real-time 3D is only part of the truth. When the final render is rendered, Threadripper is the winner of the hour. 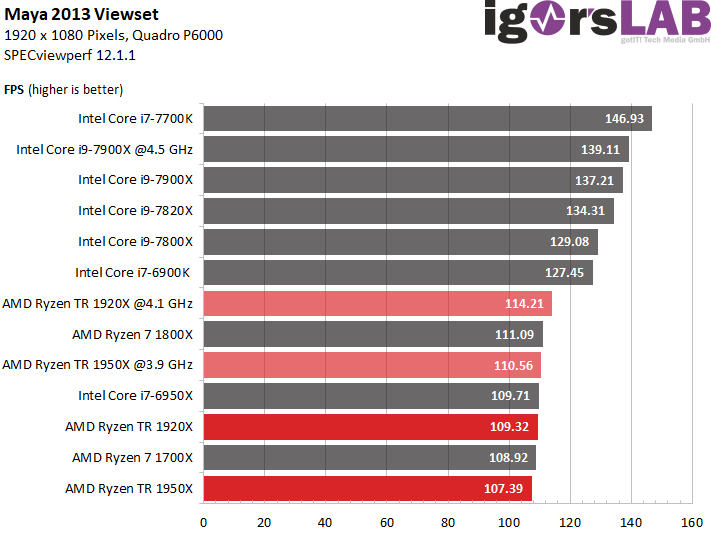 Both Ryzen Threadrippers are not unsuitable for the pure design and construction tasks, but they also can not be quite convincing. Depending on the proportion of additional, more parallelizable tasks, one can certainly also think about a deployment, but in general other CPUs will certainly be preferred here.