Sennheiser also makes in gaming headsets. Well, this realization is not so new, but after all the tests of the last few months, this specimen was a very welcome change. After all, we are not in the double-digit range, where most of the usual suspects are found, but very clearly above them. With approx. Sennheiser can also pay the GSP 550 quite decently. Well, it is not the case that the sum would deter us if the equivalent is adequate. But then you take a closer look, which can be quite interesting for the reader. And yes, I also disassembled the GSP 550, because even the view inside is not free of information...

Sennheiser also makes in gaming headsets. Well, this realization is not so new, but after all the tests of the last few months, this specimen was a very welcome change. After all, we are not in the double-digit range, where most of the usual suspects are found, but very clearly above them. With approx. Sennheiser can also pay the GSP 550 quite decently.

Well, it is not the case that the sum would deter us if the equivalent is adequate. But then you take a closer look, which can be quite interesting for the reader. And yes, I also disassembled the GSP 550, because even the view inside is not free of information. And since it is just so nice, I use the promotional video of the manufacturer for the mental and visual entry before I start myself…

Let's see what's in it and what's not. In addition to the headset and various reading material in paper form, you get a approx. 1.7 meter long connection cable with the USB dongle on one side and a proprietary jack plug on the other side, as well as the USB connection cable between the dongle and the PC or Game console. An optional cable for direct, analog connection is missing. Unfortunately, by the way, as we will see. 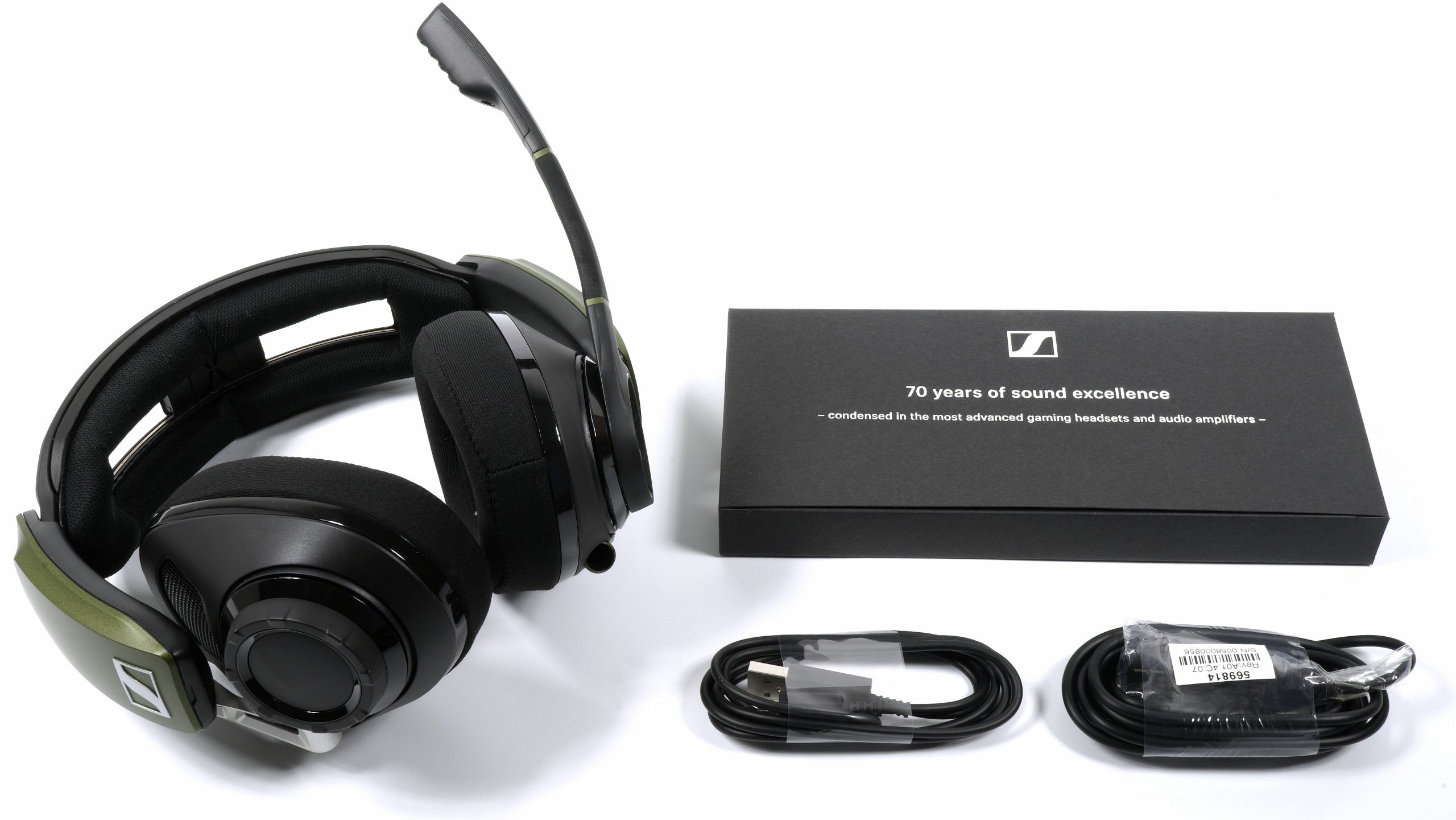 There are two other things available for free. On the one hand, there is the GSH 50 made of light metal, a headphone holder that can be screwed to the table and which should also fit most plates. There is also a simple mousepad with Sennheiser logo in soothing black. Can you take it with you, but do you really need both? At least the bracket is stable and practical. That has something. 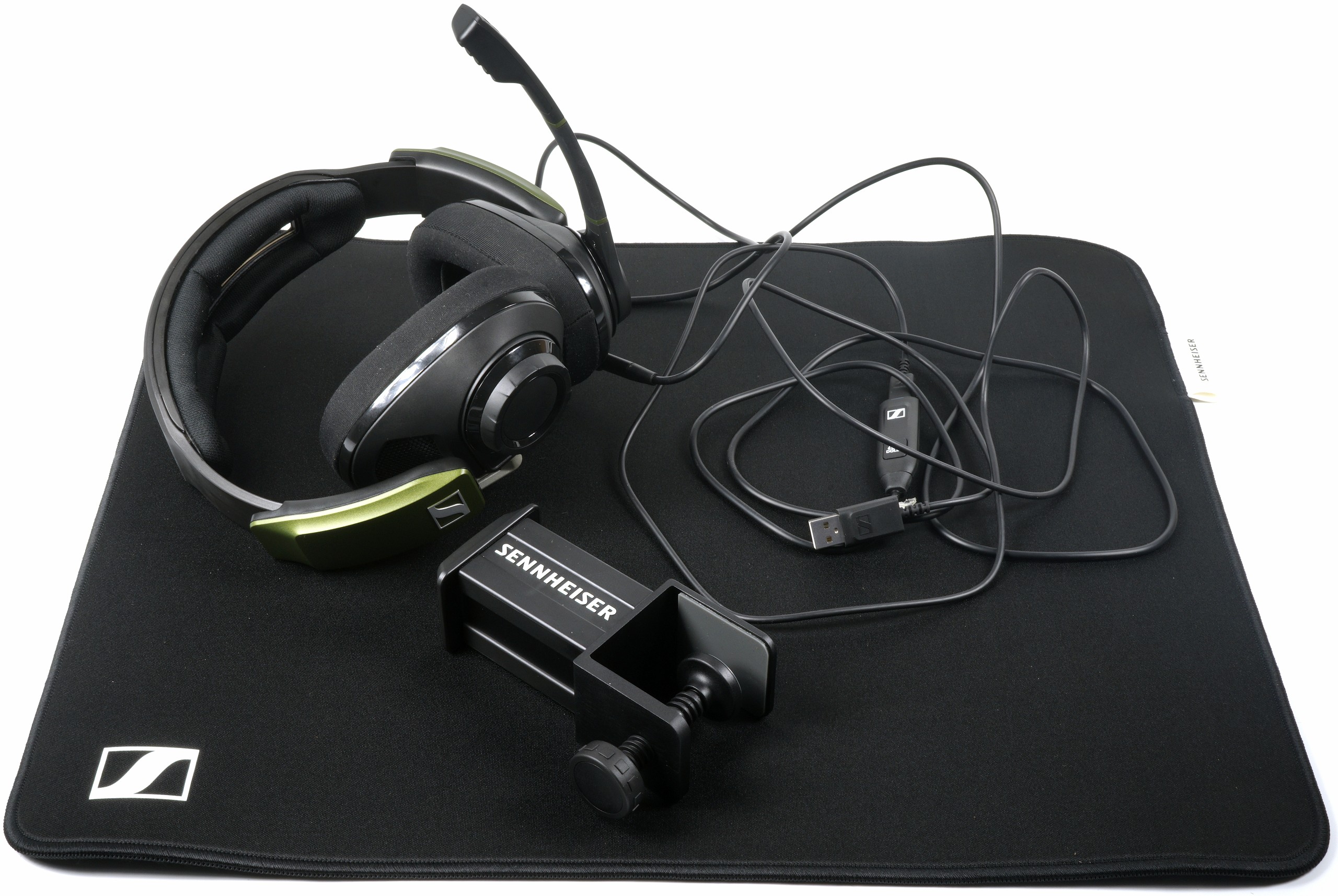 As far as material selection is concerned, I am somewhat divided. Nothing against shatterproof plastic, this can be very useful with such a journeyman trimmed to gaming. It is rather the surfaces that leave me a little questioning. Silk matt versus piano lacquer certainly fits visually quite well, but the headband on the outside quickly collects dust and unfortunately comes out of the OVP a bit dusty. The olive green of the cover at the head band ends does something military on army, which fits the theme.

Also the piano lacquer ring around the volume control will smear hopelessly after some use of the controller, hand on it. Practice and designer study are still two pairs of shoes. Even tactilely, it's not quite as fine as the high purchase price might imply. Well, it is at least very useful, on which we could agree.

The joint mechanics made of aluminium casting, on the other hand, are solid and completely free of any criticism. You can adjust the position quite well if the head is not oversized. Then the headset still sits like a one, but then it is a bit more powerful on the head. Eyewear wearers, on the other hand, will not have any problems.

The headband, which has to be adjusting slightly tightly in length, does not offer a particularly tactile resting mechanism, but you can see on the outside of the headband very nicely what adjustment you have made. On the picture below you can also see what I meant by the dust "Out of the Box". It's not something that can't be wiped off, but it could happen again and again.

The textile upholstery inside is beautifully contoured and thanks to the opening, no one will get into a sweat at some point. Overall, this is well thought out and also sits very comfortably. For this I forgive an extra plus point, which is really rare, because this part can also be easily cleaned.

The ear pads are similarly well shaped and cover as real over-ears even large eavesdroppers stress- and pressure-free. The very tight upholstery is nevertheless not uncomfortable and acoustically quite neutral. They can also be easily removed and cleaned using a simple nose-snap-matismus. Since I attach great importance to such a thing, there is also a bee out of line.

The connection of the cable is easy and yet safe, because the shaft of the plug is excessively long and largely disappears in the very low-lying socket. This certainly lasts forever and doesn't break away so quickly. The volume control on the right is intuitively palpable, but it is actually also unnecessary. The synchronisation in the starting area could also be a little better.

The fold-up microphone arm is quite massive, but no longer adjustable or customizable. For this purpose, there is another tactile switch in the joint, which automatically triggers the mute function when folding up. I come to the microphone itself later in the measurements and sound assessments. 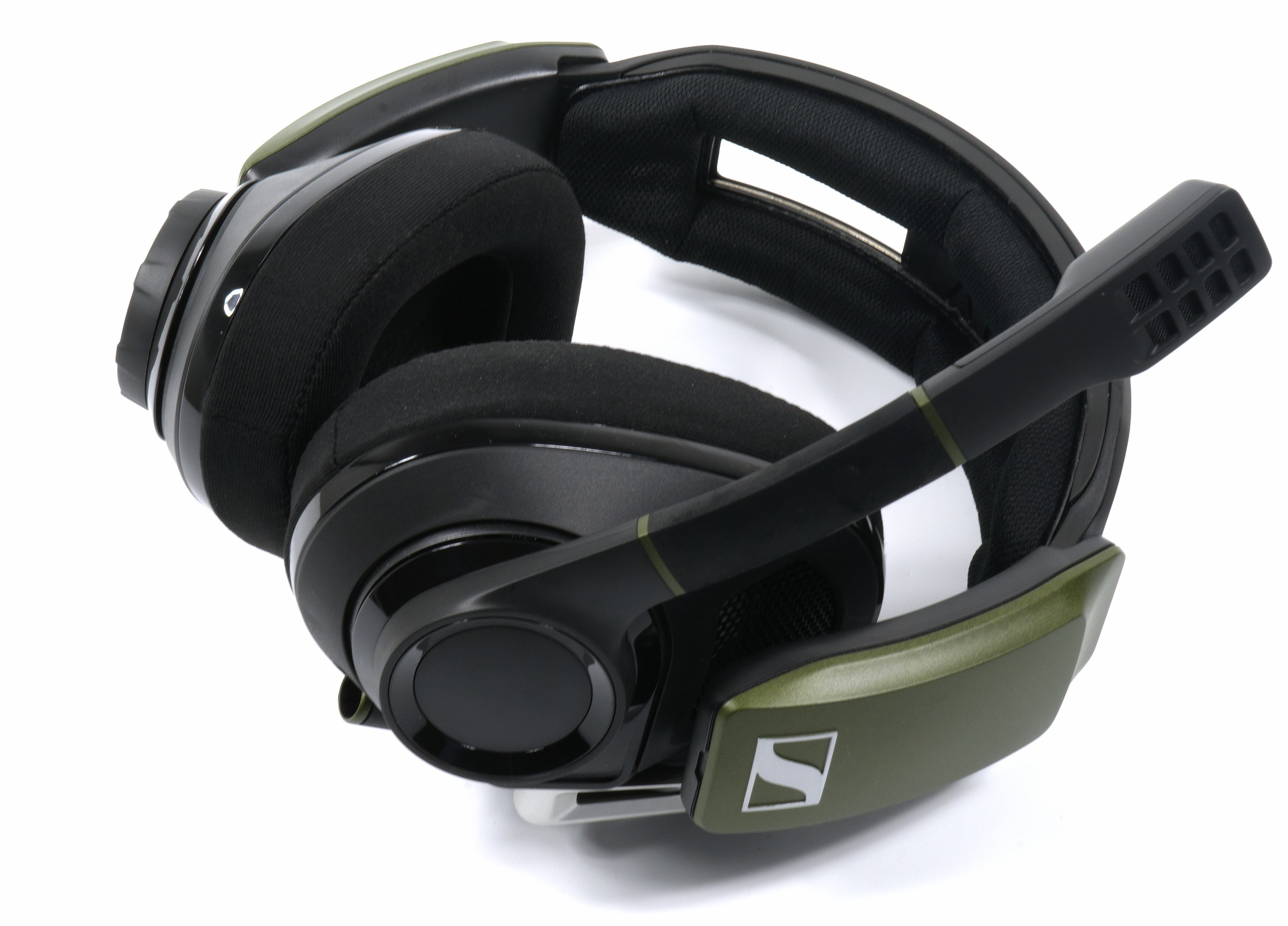 You could also operate the headset like that and just plug it in. It is recognized and the built-in Conexant chip is already doing almost completely what it is supposed to do. That's good to know when you think of a console. But actually the USB dongle can do a little bit more and for that you would need the installation. So download and install… It doesn't take much longer than it took me to write.

However, the software is already somewhat limited in terms of functionality, at least as far as sound individualization is concerned. You get a total of 3 predefined sound profiles, but no way to create your own setting. But more on the next page. You can also decide whether you want to activate the surround sound (or not), as well as the noise cancelling of the microphone and the listening. But that's it. 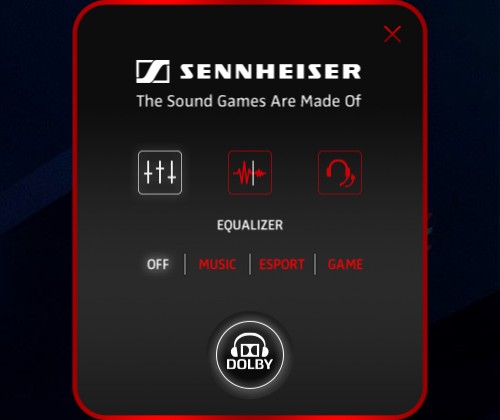 The bottom line is that this is certainly a bit meagre, but it would also be quick to put it into perspective if the sound were a hammer-hard affair even without DSP games. So let us be surprised!

Screwed on: Tear Down

The ear pads are permanently removed. The chamber has been provided from above with a textile covering that prevents the view of the driver. The screws sit behind the matte black paper stickers in the recessed holes, but are easily accessible. So of course I screw up the test object this time, logically. After all, nothing is glued or brutally pushed towards eternities, thank God. 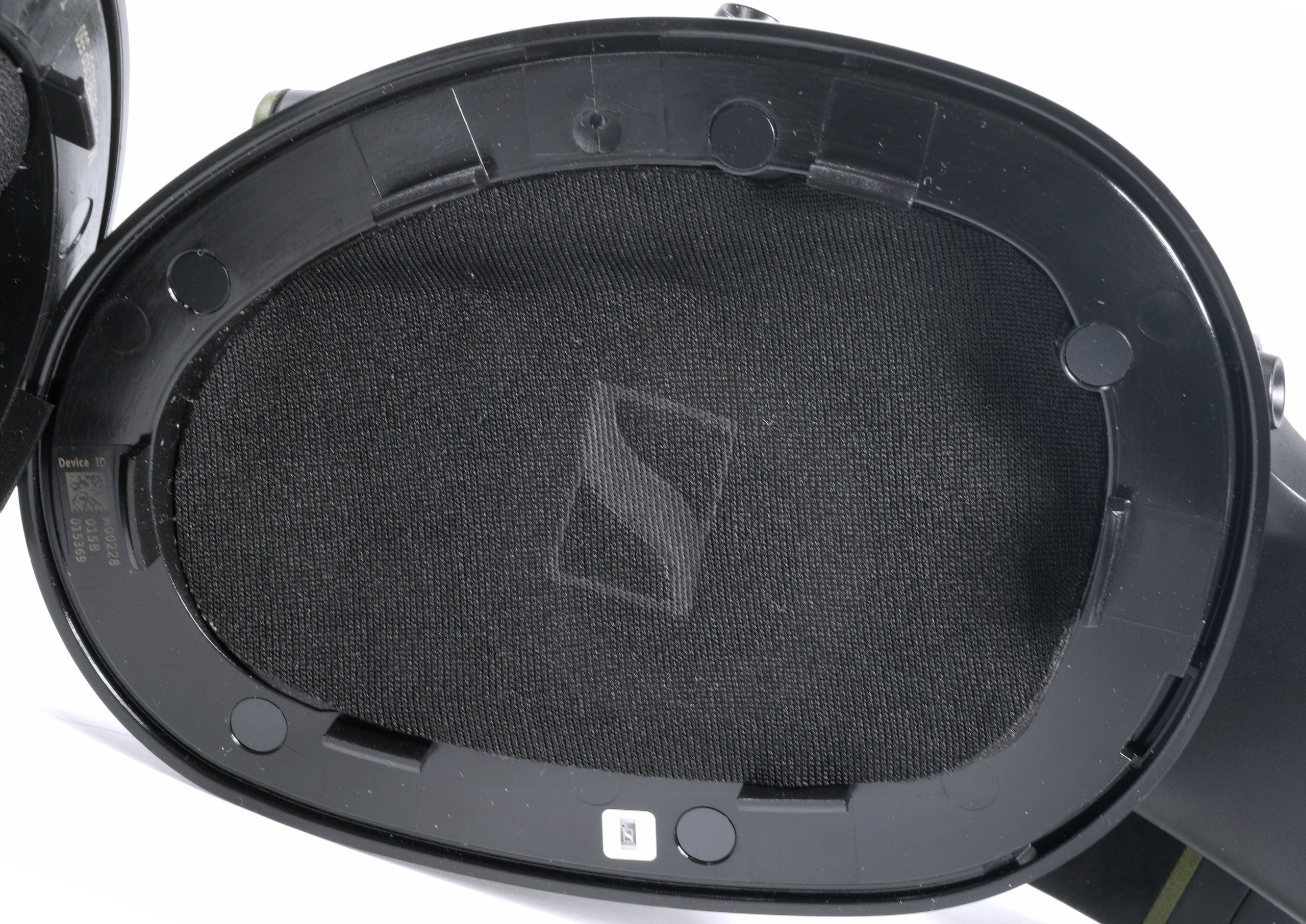 We see that the driver is playing completely open. Both the back of the driver and the screw-off front cover of the earcup are each covered with fleece, but not completely sealed. Silly sound experiments such as bass chambers or similar frills have been dispensed with altogether. Thank you for that! 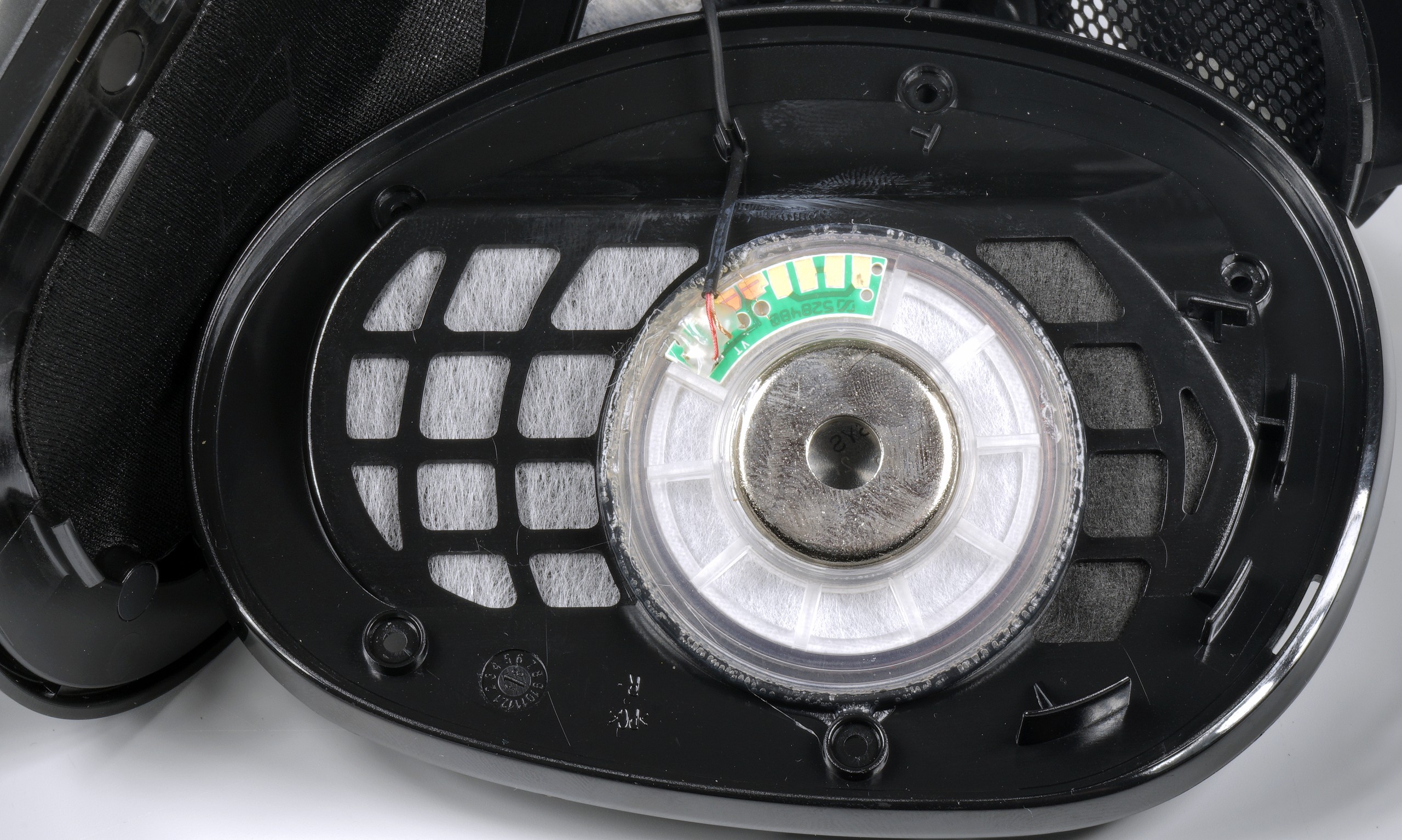 The view into the interior of the shell shows and now also that it is in an open system, in which the back can breathe with a hole grid. However, the quality of the workmanship has only been moderately distributed (sharp casting, insertion) and the hot glue has been distributed somewhat uninspired. The threads and superfluous blobs could really have been given to oneanother. However, the board, solder inge quality and wiring are ok.

To avoid confusion: Of course, I didn't disassemble the headset until all tests and measurements had been completed. Sure is safe.

Before I start the test, quickly add the data and eye fodder in the form of the specifications and the manual as a PDF file: 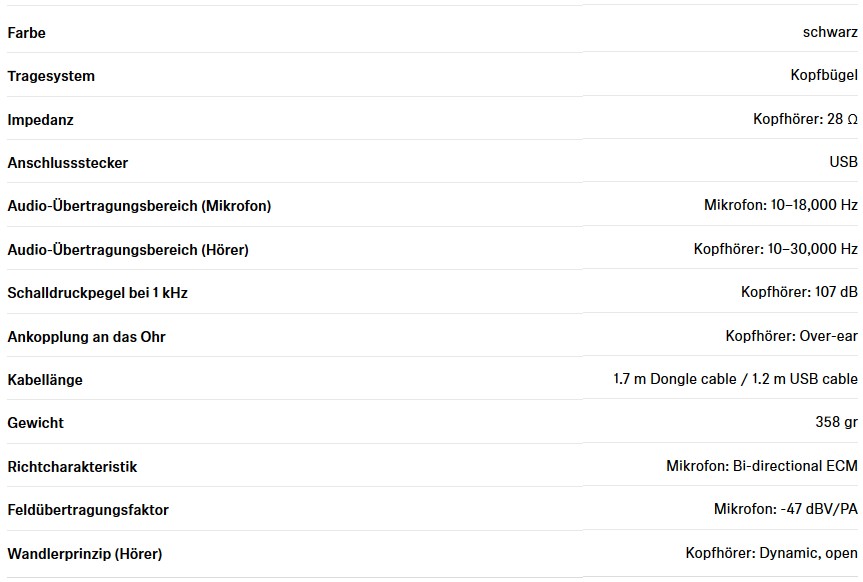 Skyroam Solis the second: WiFi hotspot finally with fair use policy against data capping, with new app and more flexible data models
On the hard BIOS tour: manual EEPROM flash of a GeForce RTX to bypass the lock with the hardware ID at NVflash | igorsLAB