The cooler in today’s article is once a real exotic, even in the range of Scythe. With almost gigantic dimensions (almost the width of an ATX mainboard) and no consideration for compatibility of other components, the Ninja 5 has many interesting aspects, not only the surprisingly low price. How the big brother of the Fuma 2 does in the test, you can read in the following article:

As for the size of the box, only the Deepcool Assassin III should have similar dimensions, air coolers are rarely seen in such boxes. The outside pages are printed mostly black with some red accents for text boxes. The front is dominated by the usual product image, while the back briefly lists the most important features.
On the side there is a table of specifications and pictures with the dimensions.

I also seem to have a fairly recent variant here and not an old shopworn, a note on the front already advertises compatibility for socket 1200. 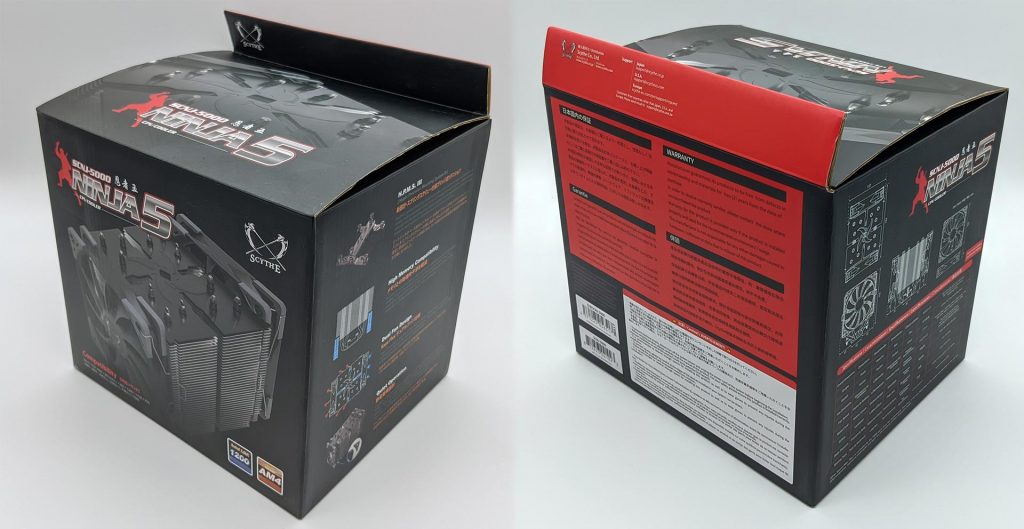 A look inside shows an unusually extensive padding of the cooler for air coolers and especially Scythe. Once around the heatsink there’s a thick layer of foam and additionally individual “compartments” for the two fans. 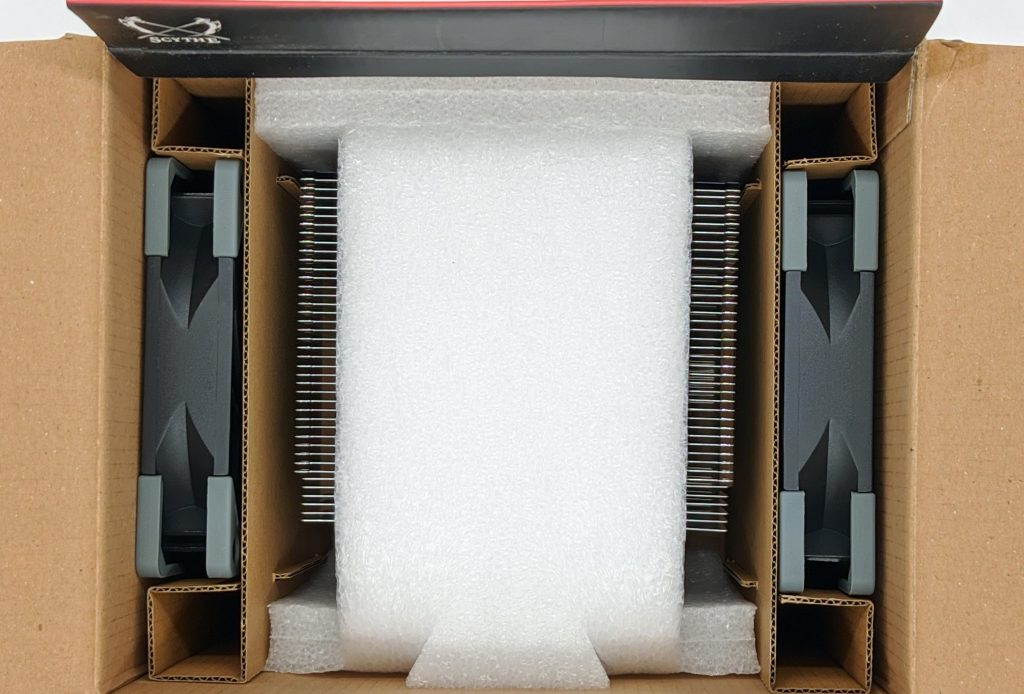 The accessories come in their own little cardboard box to unfold. It includes the well-known HPMS mounting material and backplate already prepared for Intel socket as well as screwdriver, Y-PWM splitter and a tube of thermal compound. By the way, this is not completely full but only filled in the tip, but it should be enough for multiple applications. They do use plastic bags sparingly again, but this time there is a bit more waste than usual with this manufacturer. 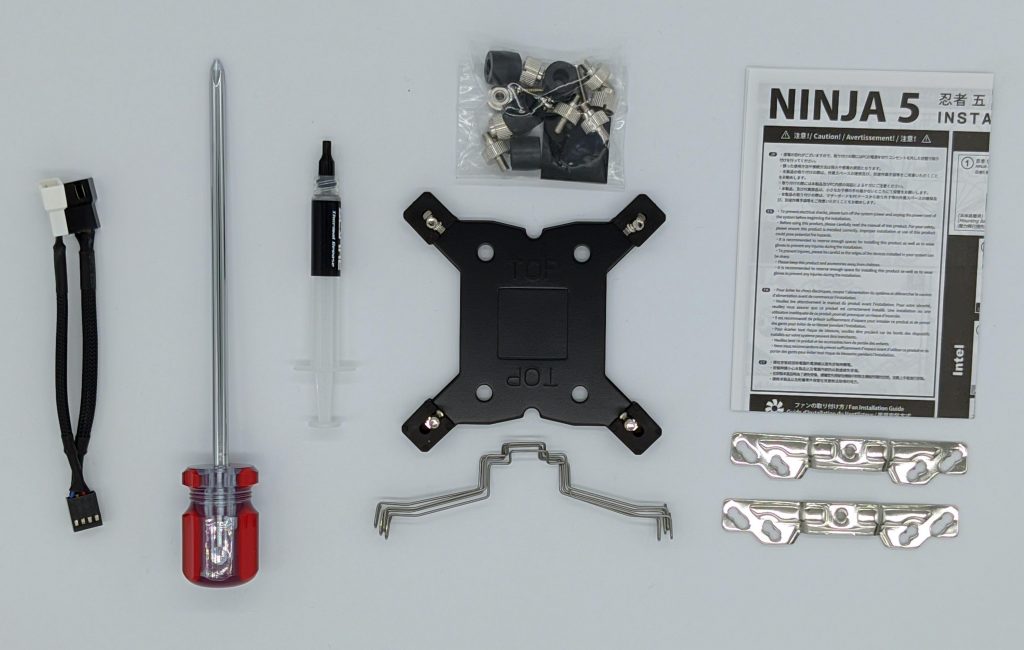 Since the Hyper Precision Mounting Systems (H.P.M.S.) in version 3 from Scythe is used again, the installation is practically identical to the majority of the rest of the assortment. Due to the size alone, it is recommended to install the cooler lying on the table with the motherboard removed or to fix the backplate with an adhesive tape. For the AM4 socket the backplate of the motherboard is used, with four rubberized spacers and screws the two silver brackets are mounted. After fixing the two spring-loaded screws in the brackets with the enclosed screwdriver, the only thing left to do is to fix the fans. This is done with the four enclosed metal clips, which are hooked into the heat sink. 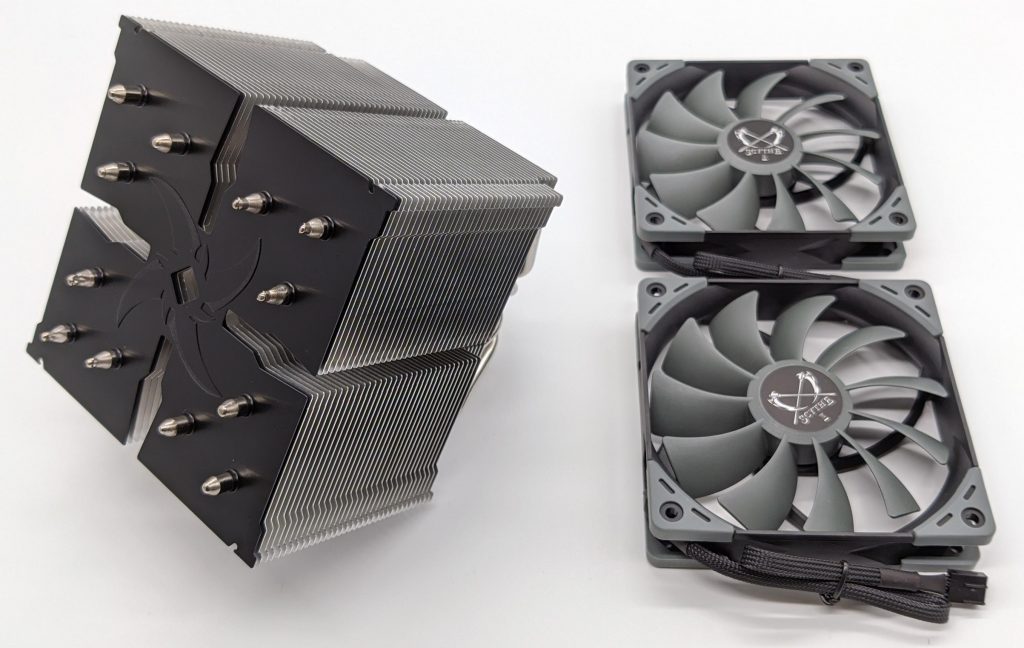 A look at the bottom side shows the nickel-plated copper base plate with a slightly convex curvature and the 6 heatpipes. The heatsink is symmetrical and the fins are well made, deburred as well as quite stable. 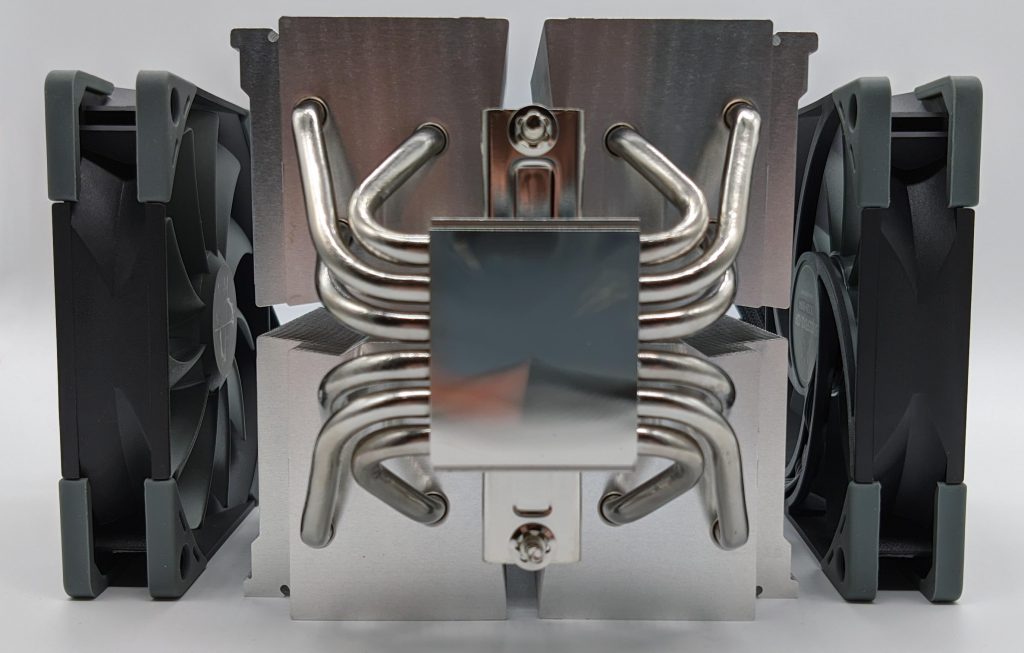 In the side view, the width of the Ninja 5 becomes really clear for the first time. There are cutouts in the heatsink on both sides as it extends over the RAM slots. Nevertheless, the RAM must not be higher than 55m, the fans must also be set a good bit higher when installed in the case and the front one still rests on the RAM even then. There are also space problems at the back of my motherboard, because the fan bumps against the VRM heatsink and has to move up a bit as well. 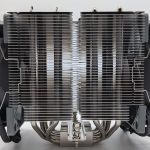 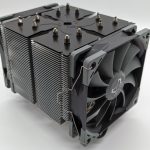 As usual, the following is a list of the most important technical data, further information can be found on the German manufacturer’s page or the somewhat nicer international page. 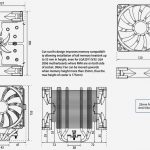 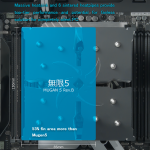 By the way, the “MUGAN” is the basic version of the already tested Mugen 5, with so many names in the own assortment one can make a mistake.

Back to the /root(s) – Retro-Gaming for beginners and enthusiasts (Attention, can be addictive!)
MSI RX 6800XT Gaming X Trio 16 GB Review – Sanity on silent soles with decent reserves for cocky people