The 3dsmax-06 viewset of SPECviewperf was created with a view to achieving the highest possible graphic load. The models for this viewset are taken from the SPECapc for 3ds Max 2015 benchmark (which I also use in the following graphics) and other sources. In order to get an optimal approximation to real use cases, multiple views on the screen with different rendering methods were used in several tests. The rendering styles in the Viewset reflect the styles most commonly used in the major markets, including shading and wireframe and some less common rendering styles. The animations in the Viewset are a combination of model spin and camera fly-through, depending on the model. After all, there is a 10% increase when using PCIe 4.0. 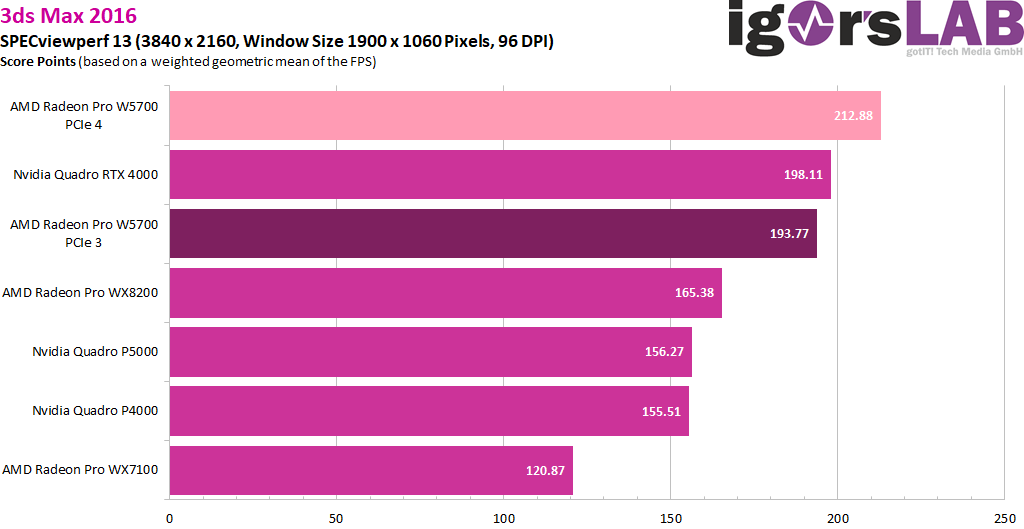 But the advantages of PCIe 4.0 can also be proven with the full program and the SPECapc, even if the differences in the individual benchmarks and the composite as a summary are much smaller at 2-3 percent. 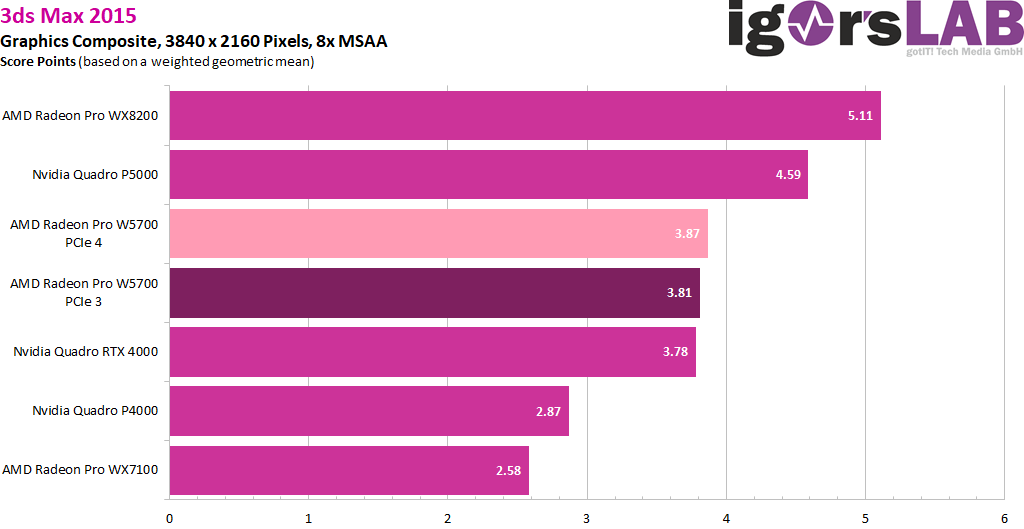 The snx-03 viewset of SPECviewperf 13 was created based on the standard application NX 8.0 from Siemens PLM. The model sizes range from 7.15 to 8.45 million vertices. The viewset contains numerous rendering modes supported by the application, including wireframe, anti-aliasing, shaded, shaded with edges and the studio mode. With Siemens NX 8.0, the advantage of PCIe 4.0 is still about 2.5%. 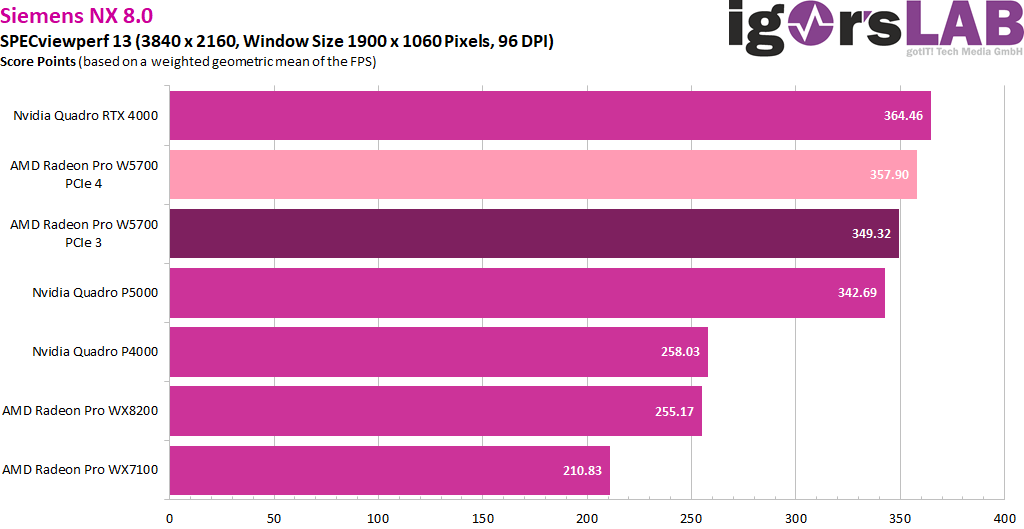 Blender is quite grateful when rendering larger models on the graphics card (here with OpenCL). The time loss of PCIe 3.0 compared to 4.0 is a whopping 6.5%, which should be quite noticeable for more complex animations. 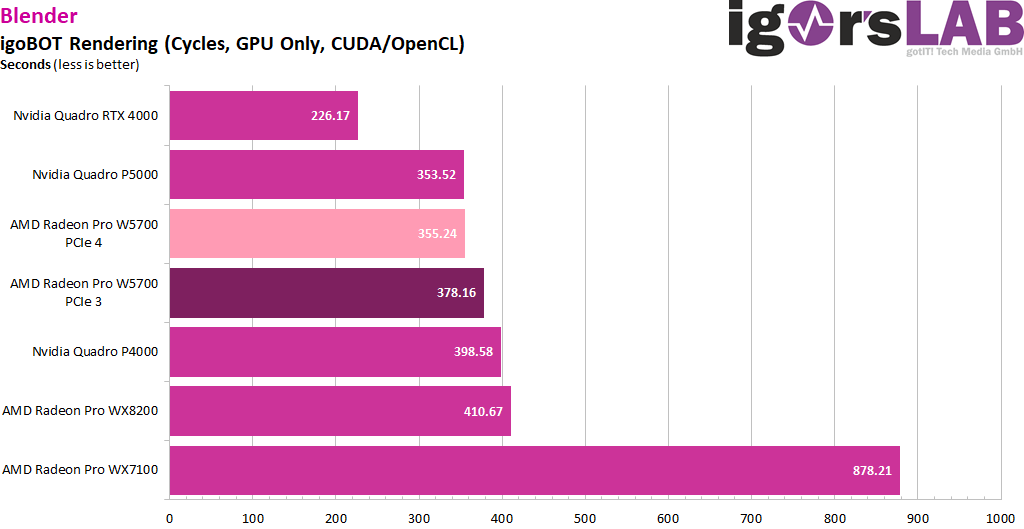 But even a complex real-time preview can benefit. This is a scene with ~470K vertices and ~900K triangles. The scene contains three identical car models and is rendered with the OpenGL renderer while the camera pans 360 degrees. This is more complex than games can offer and on PCIe 3.0 it is much slower with almost 9.5%. 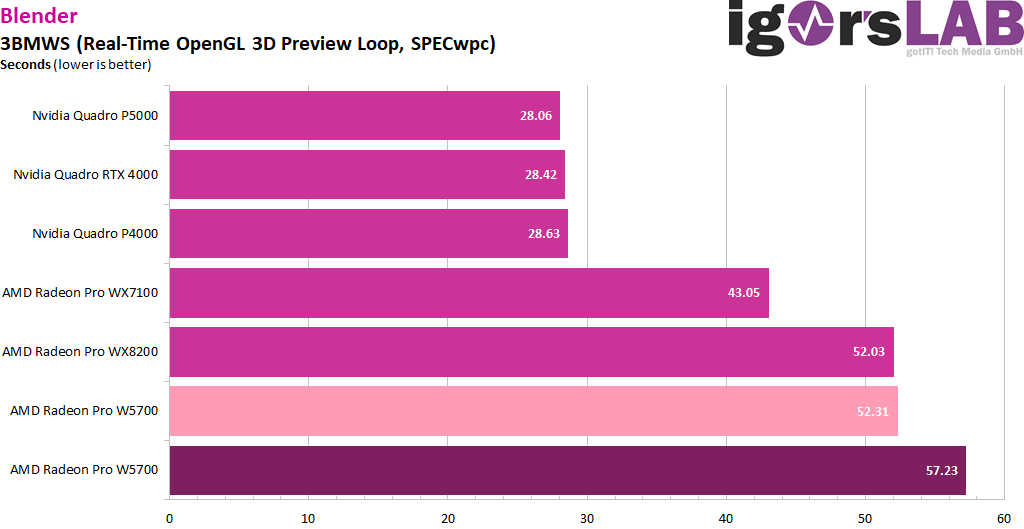 The goal is to achieve 24 FPS for a smooth preview and not to drop single frames. If playback with PCIe 4.0 is already bumpy, the disadvantage with PCIe 3.0 is already 15% less performance. You can even see that. 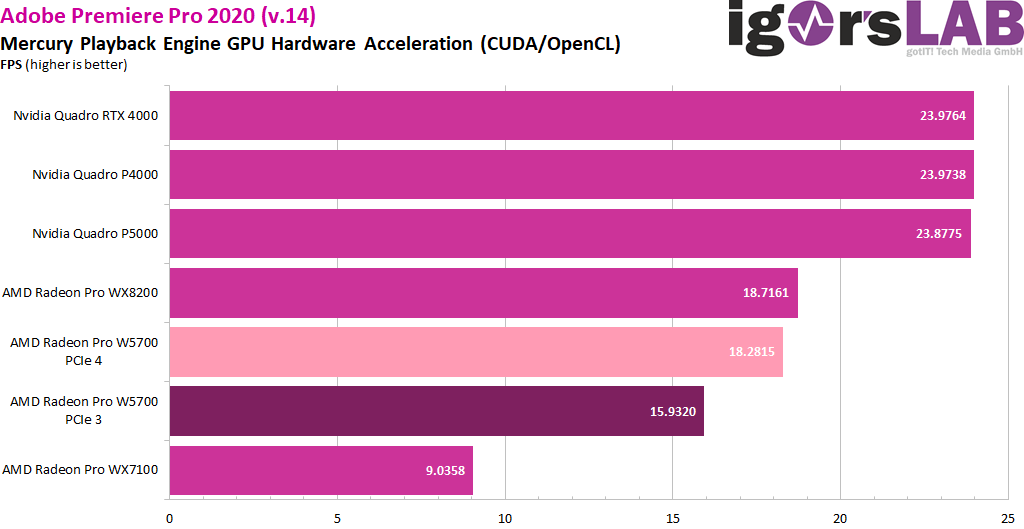 he hardware-accelerated filters also benefit, though not quite so extremely. Here the filters on the GPU filter process a completely processed music video sequence, which is also scaled to 4K. The video uses the customization layers of Premiere Pro 2020 to define the final “grunge” look of the project. The effects used in the project include: Video scaling, luma curve adjustment, fast blur, noise, hue, RGB curves, black and white effect, and image mixing and video overlay. The difference is a good 5%. 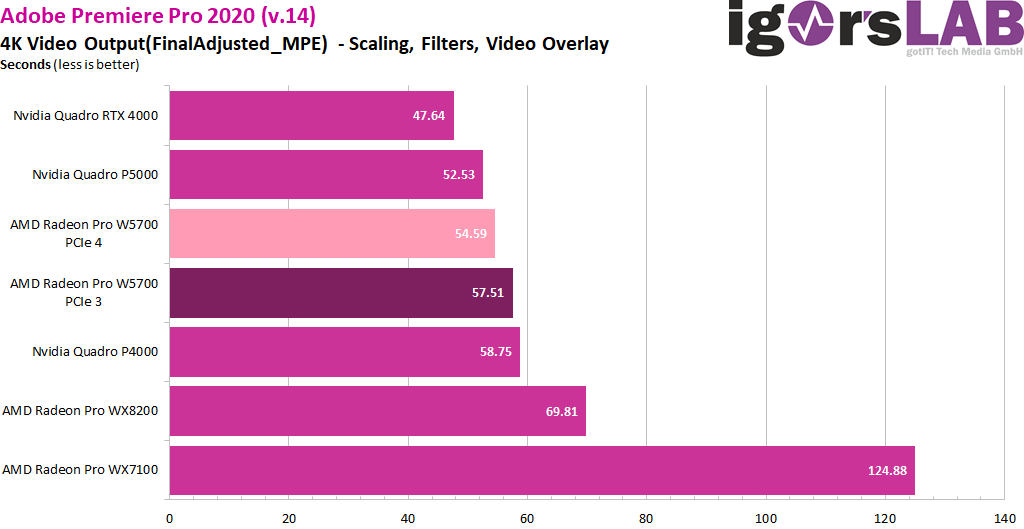 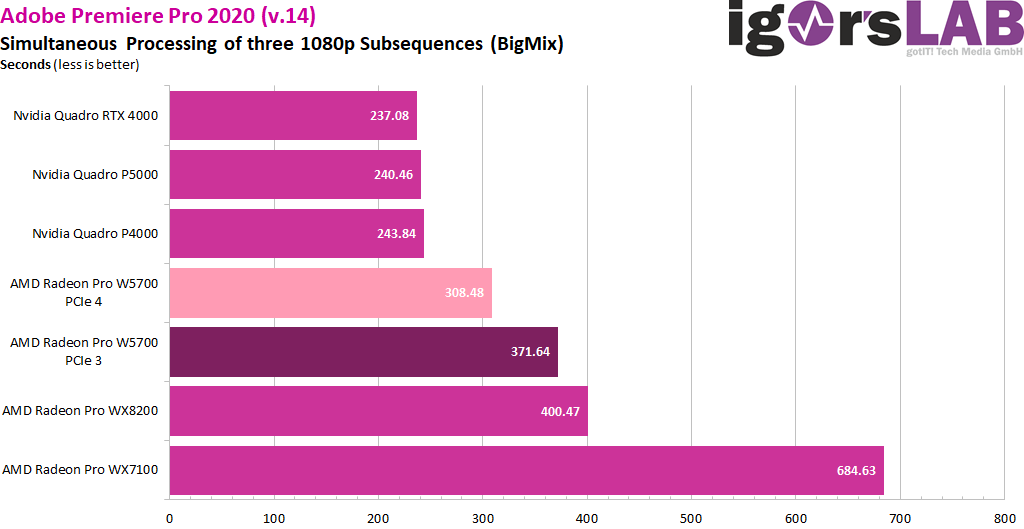 In simpler applications and games, you won’t always be able to measure the difference as clearly and even less subjectively as in the situations shown here. But, I attach great importance to this, there are definitely real scenarios where even a card like the Radeon Pro W5700 can not only measure but also clearly noticeably benefit from the faster PCIe 4.0. You don’t have to construct a worst case scenario first, you actually stumble over it from time to time in everyday life.

That’s exactly why I’m even more surprised that AMD simply leaves such a potential lying around by opting for an Intel Core i9-9900K and against their own processors and platform when they advertise the Radeon Pro W5700, and doesn’t even consider it with their own benchmarks instead of exploiting it. The target group would perhaps rather think about a complete AMD solution, if only they really liked it