And finally let’s take a look at the overclocking potential. Well, I already talked about that in detail in the first tuning guide video, but I didn’t had those beautiful plots and all the processors back then. If you have no idea what I mean with overclocking, I simply talk about a fixed core frequency for all cores equally. It’s called ManualOC and the beauty of this method is, that it still allows the processor to use AMDs power saving features, like sleep states. In fact overclocking can also help you save power and reduce heat and still maintain a high performance level.

And that’s exactly what we want in our thermally constrained notebook systems. 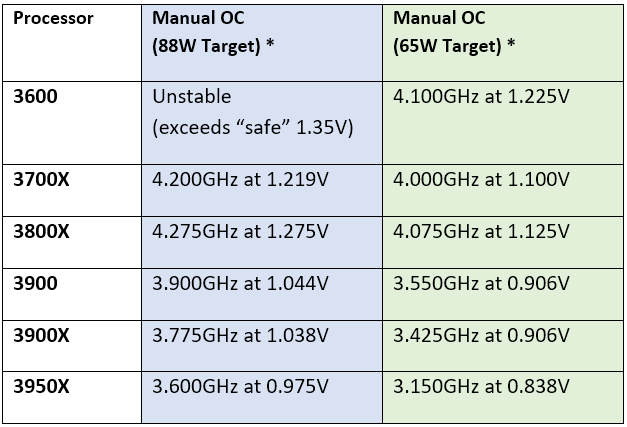 *those results are highly dependend on your CPU’s silicon (“quality”). My results are unlikely to match yours! Every CPU is different.

I have tried to use the cooling performance of the normal power modes as a reference for better comparability. So I tried to adjust the clock frequency and voltage so that the PPT reached 88W and 65W during a CineBench R20 run. Basically all processors responded very well to this overclocking method and the multi-core performance has increased considerably. So much so that the 88W Performance Mode achieved roughly the same results with only 65W PPT. The multi-scores of the Manual OC with 88W PPT were accordingly high. Overall, the performance of the processors could be increased by between 6% and 30% with the same power consumption.

The disadvantage of this method is that the processors can no longer reach their boost clock frequency because it is limited to the set value by the manual OC. This has an enormous impact on single-core performance. Computer games are said to benefit from single-core performance, but how much does that really matter? Does Manual OC cost us a lot of power? One should not generalize computer games so completely. Every game is different and doesn’t always need one or two threads. Many modern titles can already use six CPU cores, or even more. Therefore, the lower single-core performance is not very important in reality.

Shadow of the Tomb Raider Benchmark

In our example “Shadow of the Tomb Raider” the benchmark results show about the same FPS as with the normal power modes. However, we can significantly reduce power consumption, temperatures and also noise development. It is also interesting to note that although 88W Manual OC leads to 88W PPT in CineBench R20, in partial load scenarios, as computer games usually are, it shows significantly less power consumption than the comparable power modes. And not only in computer games, but also in browser testing and idle. The notebook’s temperatures and volume benefit from this just as much in the tested scenarios.

So I simply tried to match 88 and 65 watt power draw in CineBench R20, comparable to the classic power modes for my tuning attempt. Basically all processors showed great response to the ManualOC tuning method for multi threaded workloads. You can achieve roughly the same performance levels of the 88W performance mode with only 65 watt power draw using ManualOC. And the 88W ManualOC result in even higher performance levels. This is accelerating nearly all production tasks noticeable.

The trade-off about this method is that the CPU will stop boosting, so you never reach higher values than set. This can harm single threaded applications, because they strongly benefit from the boost mechanic. So what does that mean for gaming? Gaming is known to be somewhat dependent on single threaded performance. But modern games use more and more threads. So the lower single thread performance disadvantage does not influence most games too much in reality. In fact SOTTR can even benefit from ManualOC in computation heavy scenes.

So all in all the performance is roughly the same as with the regular power modes, BUT we can decrease power draw, temperature and noise significantly. Even if the Manual OC with 88W power target can draw the same amount of power as the classic 88W Performance mode in full load situations, it actually uses dramatically less power than the Performance mode in all other situations. Not just in games, but also in my browser benchmark and even in idle. Also the temperatures and noise benefit from that action noticeable.

Even if it’s not ideal for single threaded applications, I still think that ManualOC is the way to go for this notebook. The advantages are huge. To apply ManualOC automatically after a system reboot you can use the software ZenStates for example. There is even a version for Linux based operating systems. But make sure to deactivate the ControlCenter software in windows services, otherwise it could revert your settings from time to time.

ManualOC in Shadow of the Tomb Raider

Working, creating and designing on the notebook – the workstation and studio test on portable devices
Intel Xe Dual-GPU discovered in Sisoft Sandra benchmark – is there an Xe LP with about 4 TLFOPS performance?