It’s that time of year again, so today we’re going to tackle the topic of system latency. Today it’s again about the two opponents NVIDIA MSI RTX 3060 Ti Gaming X Trio vs. AMD Radeon MSI RX 6700 XT Gaming X, the current middle class in the pixel producing business. This also means that NVIDIA Reflex and Boost as well as AMD Anti-Lag and Radeon Boost want to show us what they are capable of when it comes to reducing system latency under DX12 in Call of Duty Modern Warfare.

This time I used my LG 27GL850-B with 144 Hz in 1440p resolution. This monitor is NVIDIA G-SYNC compatible and AMD FreeSync Premium certified. So it meets all the requirements for what is to come in a moment. At this point, I would like to briefly address a request that was made on the forum. The topic of the benchmark graphics has been updated again by Igor (here is the link), so it should be clear now what the individual graphics say. Furthermore the link to the article: What is NVIDIA LDAT (click here)? And I have one more on the topic of LDAT’s measurement system capability (click here).

Now, before we get fully into it, I’d like to address one more issue on my own behalf. Since the last article (link here) was quite controversial and slightly toxic in the forum, I would like to officially apologize from my side for prejudging the readership in terms of “fanboy” be it AMD or NVIDIA. That was unnecessary! I also realize that the comparison between NVIDIA Reflex and Radeon Boost will always be somewhat lopsided. They are diametrically different techniques to reduce system latency.

Nevertheless, it is advertised by both AMD and NVIDIA for this purpose. Which I’ll end up measuring for you guys, to put the collated PR slides through their paces. This is not only about the average latency, but also about the scattering and other parameters, which in the last consequence an evaluation in terms of: Which is better, NVIDIA Reflex & Boost or AMD Anti-Lag or Radeon Boost? That the pure raw performance of the respective GPU has an influence should be clear. But I have no control over that. At the end of the day, it’s the readings that count, whether they are in black and white or in colour! 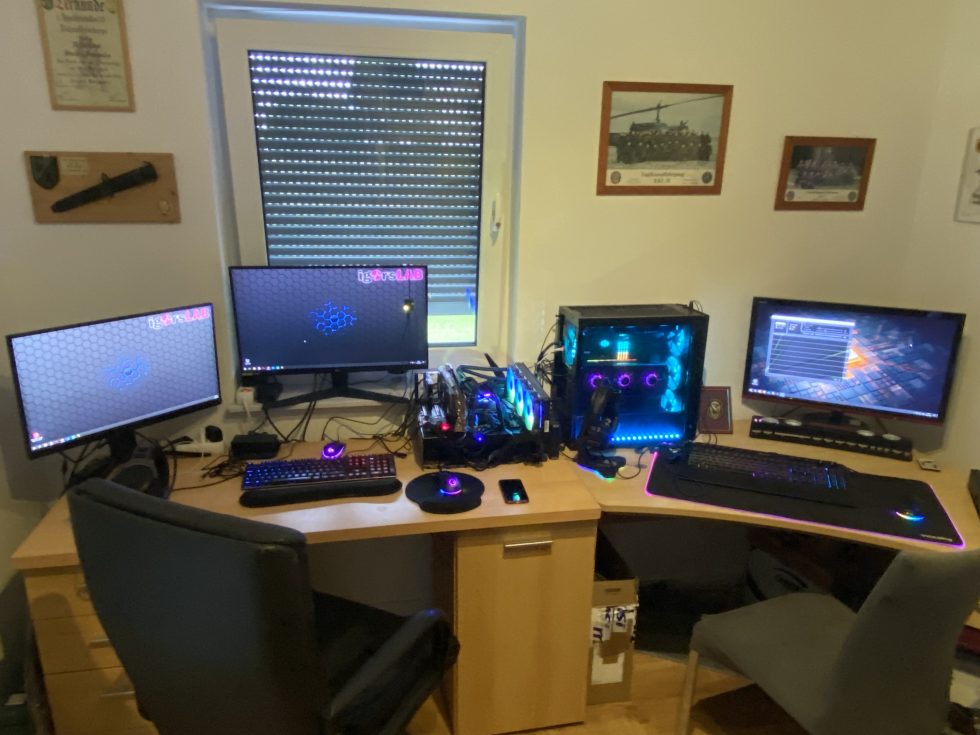 Please understand that I took the picture so blurry. Since there is personal information on the pictures on the wall, that was by design!

The videos used in this article were recorded as lossless as possible, and we host them ourselves on our own Epyc server in the datacenter for better quality without conversion by YouTube. Depending on your internet connection the pre-load may take a little longer, because the data has to be buffered on your PC first. In return, however, there are also crisp images, which we also need for the objective assessment.

Since my test system has changed slightly, here’s another read:

We are now testing with an AMD Ryzen 7 5800X (stock), which has a positive effect on the CPU bottleneck issue. However, today’s tests are all about forcing the graphics cards to the GPU limit to bring AMD and NVIDIA’s gimmicks to bear. Furthermore, I refer to the fact that the latency measurements are performed with the Logitec G203 Prodigy mouse. NVIDIA LDAT itself, is attached to the USB 3.1 Gen 2 ports of my gaming system, which you can see on the right side of the picture.

I would like to emphasize at this point that the hardware requirements for both GPUs are always the same. Even though there are now 8,000 Hz mice and keyboards on the market. The fact that there are also 360 Hz monitors for extremely much money to buy, that should be mentioned here only to completeness. My goal is to test the gimmicks mentioned by NVIDIA and AMD. That one can lower the latencies here by other, still faster hardware, that is conscious to me, but not the today’s topic. So I would ask that this be taken into account. Then let’s get started, next page please.

21 reasons why everything is the way it is. Hit or shit?
Alpenföhn Wing Boost 3 PWM 140mm Review – Powerless nightmare for the ears instead of a cool wind for the hardware