When it comes to power consumption, there are actually no big secrets, because what NVIDIA specifies as TGP is largely complied with. With about 13 to 14 watts in idle, you’re in the usable range, even if it’s relatively high, because it could also go lower. The partial load ranges are realized relatively economically, which could also be due to the better controlled clock rate. However, the card reaches 225 watts under real full load in the Witcher 3 at Ultra-HD and full warming, which is 5 watts more than predicted and stated in the specs.

But this is not the whole truth, because the power consumption is very resolution dependent. Why is that? Ask the CPU, which in some situations already slows down the fast sweeper a little bit. Not in every game, but in some it happens. We had already analyzed which exactly these are when we were talking about the combined power consumption with the CPU and its individual listings. But if you add up the power consumption in Ultra-HD, which I measured in all games over the whole runtime, then everything is again at the indicated 215 to 220 watts for the TGP, a spot landing, because the CPU doesn’t limit anymore. First of all, the respective average across all resolutions, games and graphics cards: 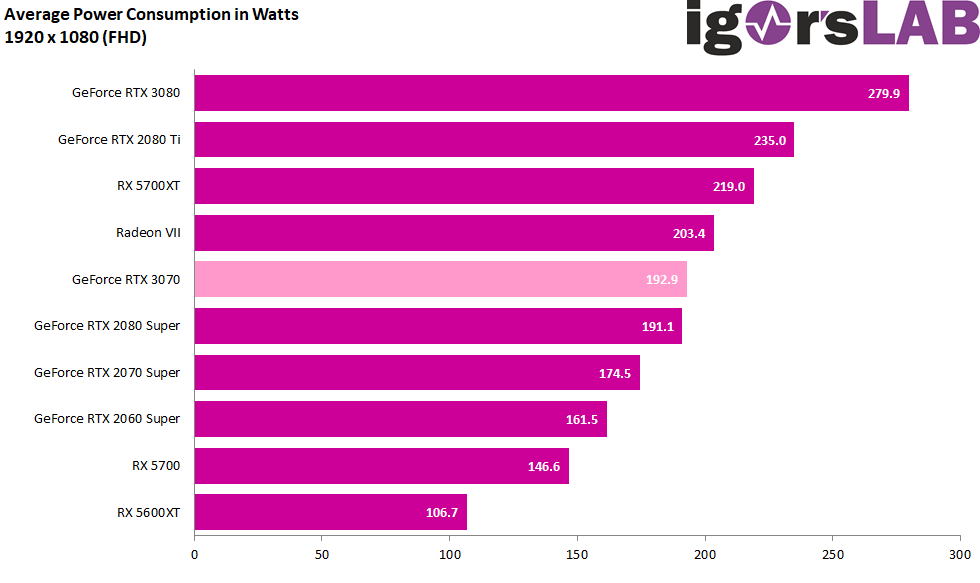 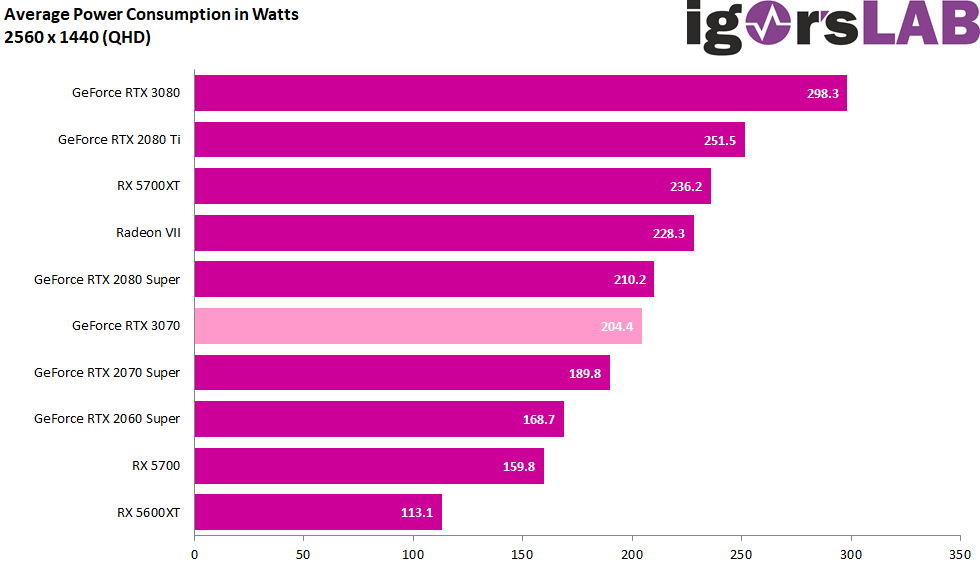 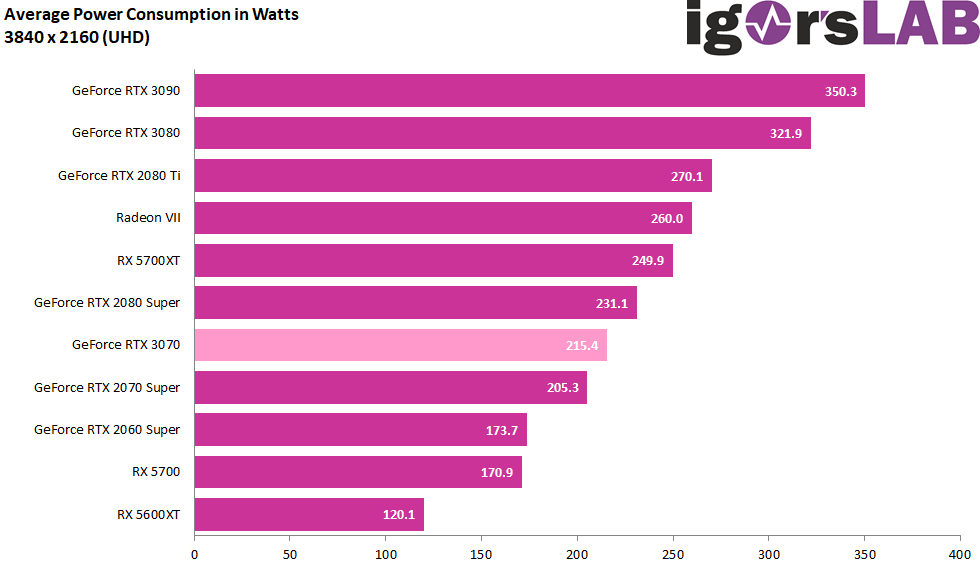 The following table now shows the maximum values of the respective load scenarios and the averaged gaming glass. The value for Gaming UHD is the highest value measured in Witcher 3 because the game is still the spearhead of games in terms of power consumption. 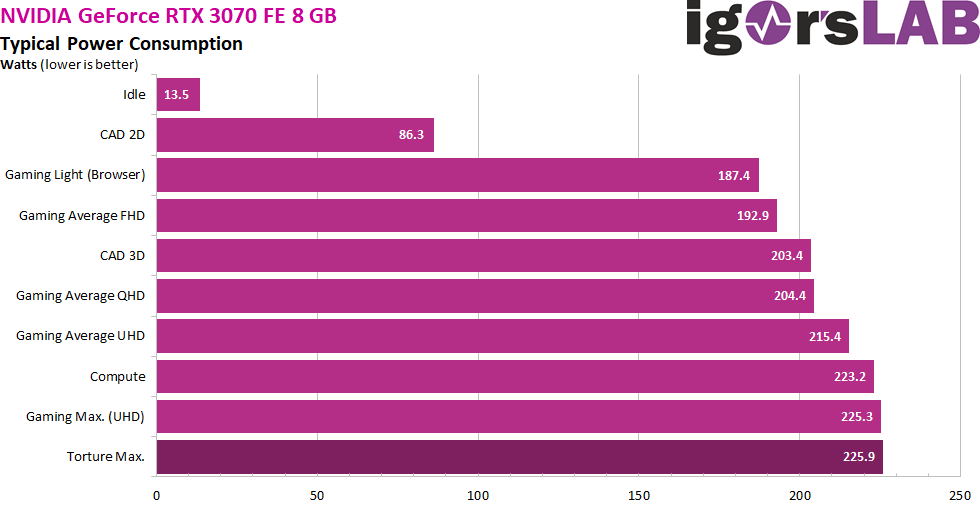 Which brings us to the specifications, because at the end of the day the firmware clearly regulates what is possible and what is allowed to be done at maximum and minimum. A maximum of 400 is allowed for the VU, which can be retrieved with the appropriate software, but is also somewhat pointless. 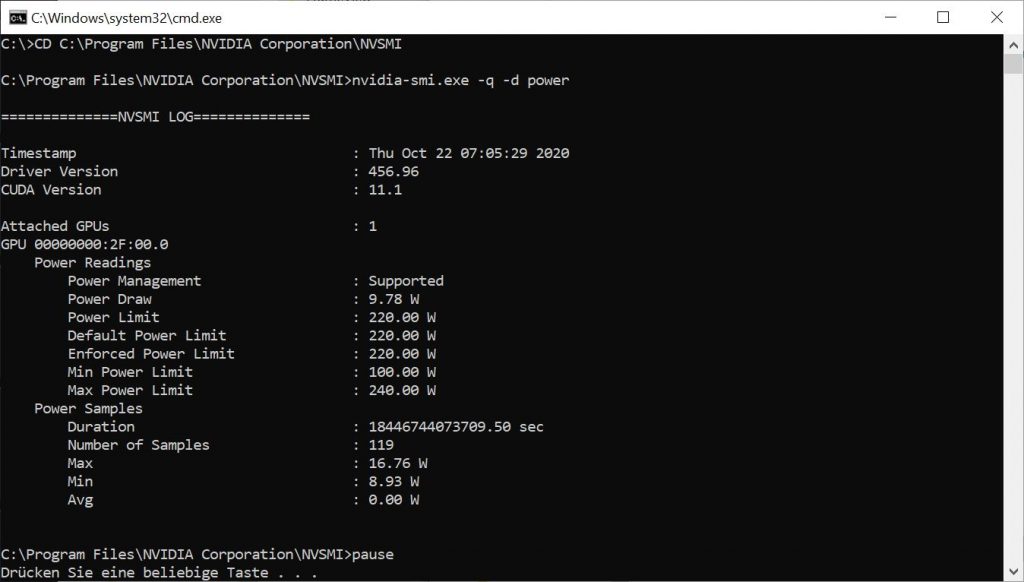 Let’s now move on to the load on the motherboard slot, whose load is specified by the PCI SIG as 5.5 amps. This results in a maximum power of 66 watts at 12 volts. You can see very clearly that this limit is already slightly exceeded under full load with 5.6 to 5.7 A when the maximum power limit is exhausted. This is not nice and it is probably also due to the shifted balancing, since the 12-pin is only used as a rail. In this case it would have been even better to supply another of the nine phases from the 12-pin and relieve the PCIe slot. 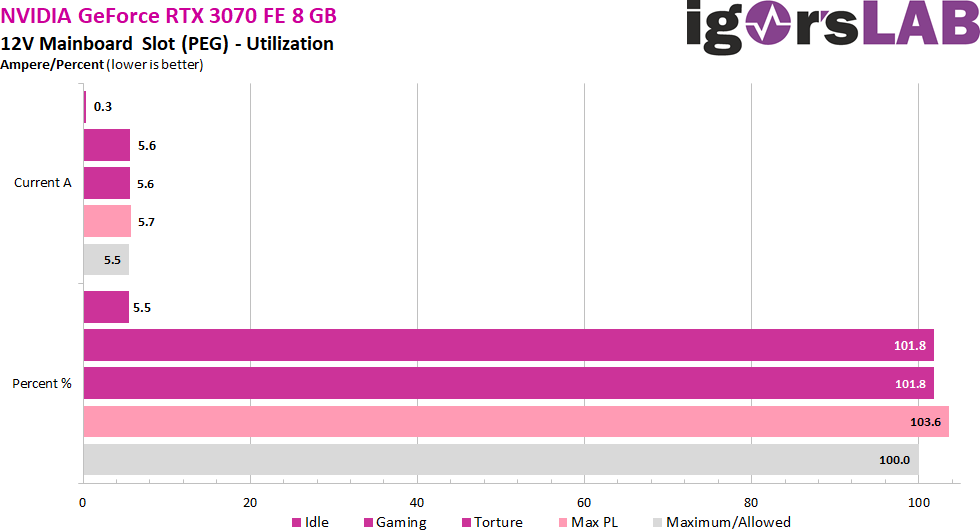 The somewhat more detailed curve for gaming and torture looks like this, whereby the intervals with the long 20 ms are still very granular. 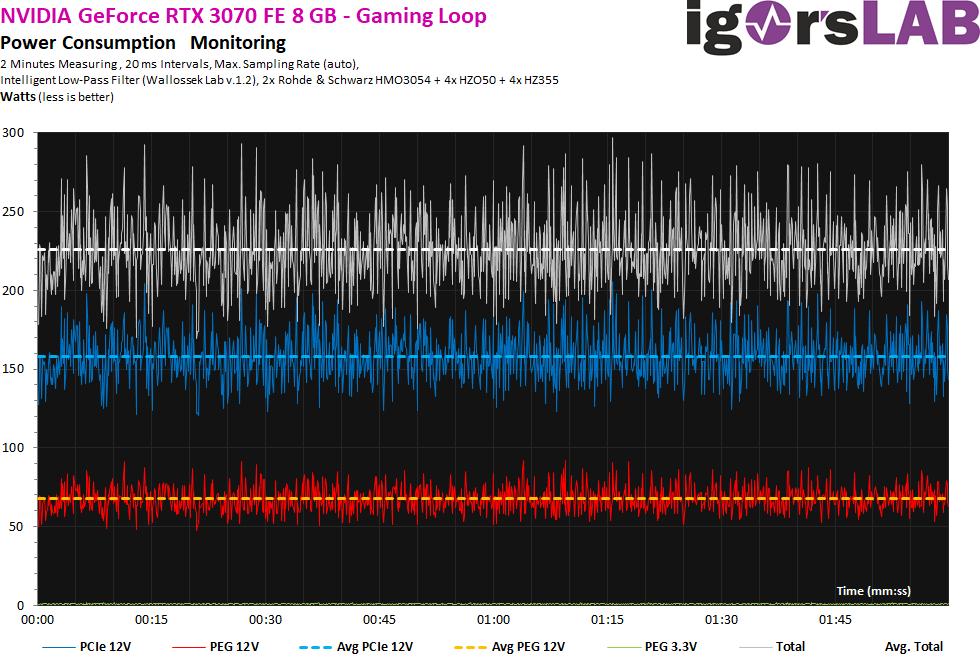 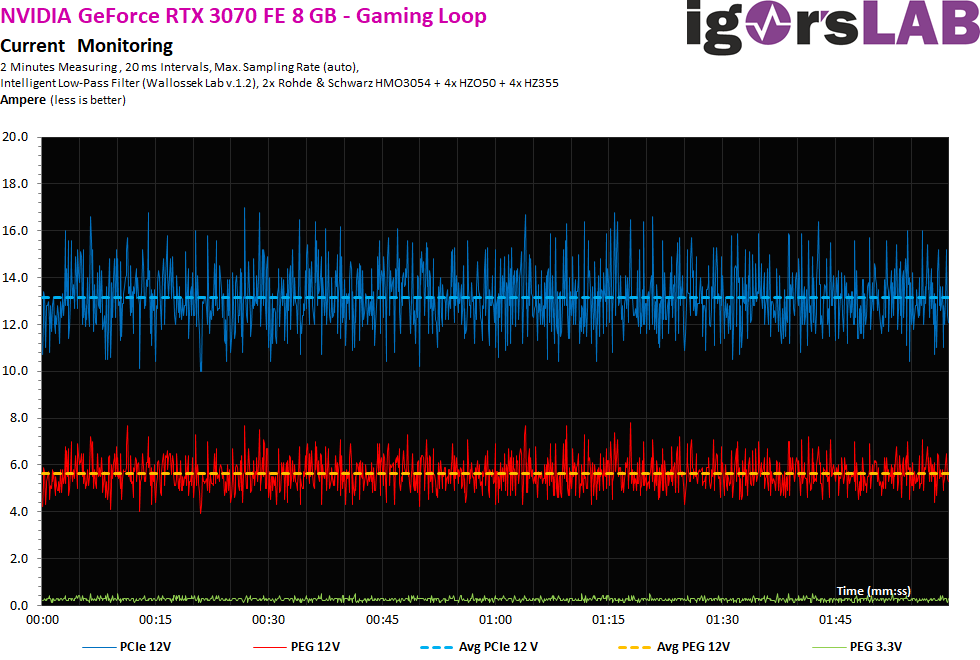 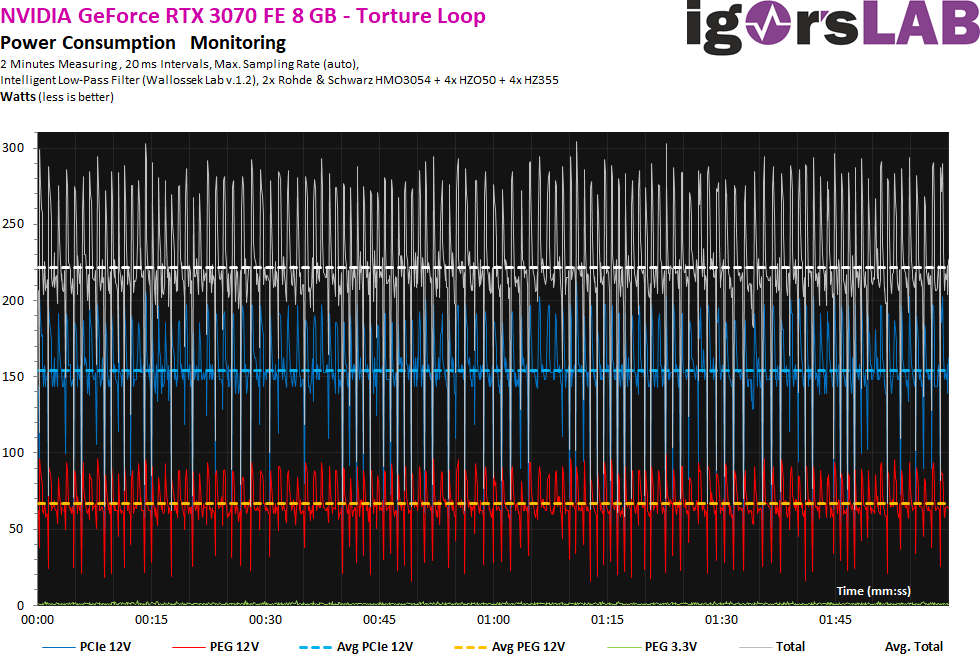 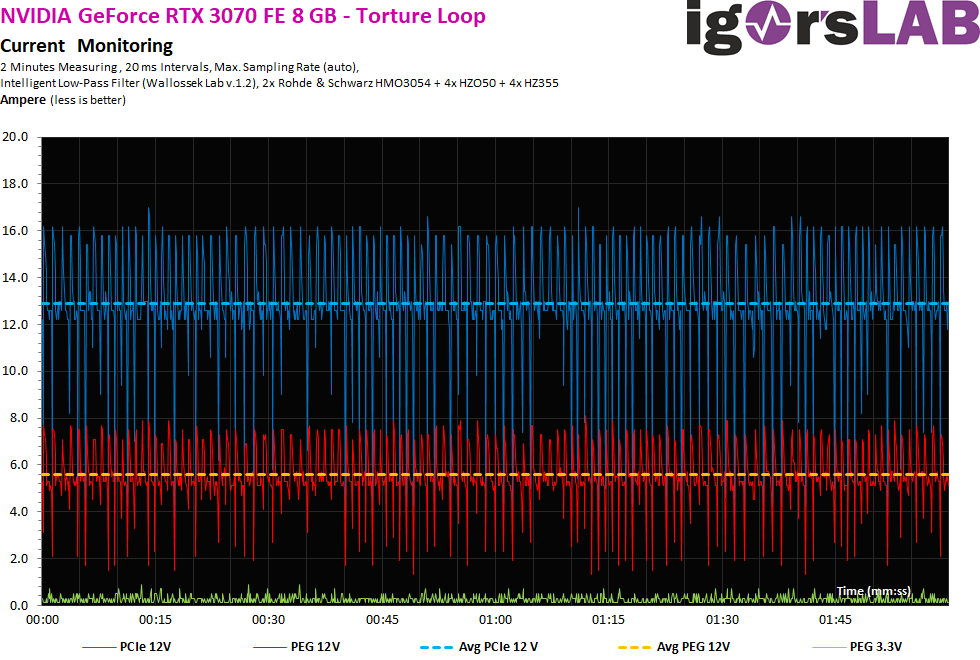 Peaks with intervals between 1 and 10 ms can lead to shutdowns in very fast reacting protective circuits (OPP, OCP), especially in multi-rail power supplies, although the average power consumption is still within the standard. For this card, I would therefore calculate at least 350 watts of the total power consumption of the system on the secondary side with a normal OC with up to 240 watts as power limit as graphics card load, in order to have enough reserves for the worst case scenario. A short excerpt with higher resolution shows us now the 20 ms measurements (10 μS intervals), as I let them run automatically for value determination: 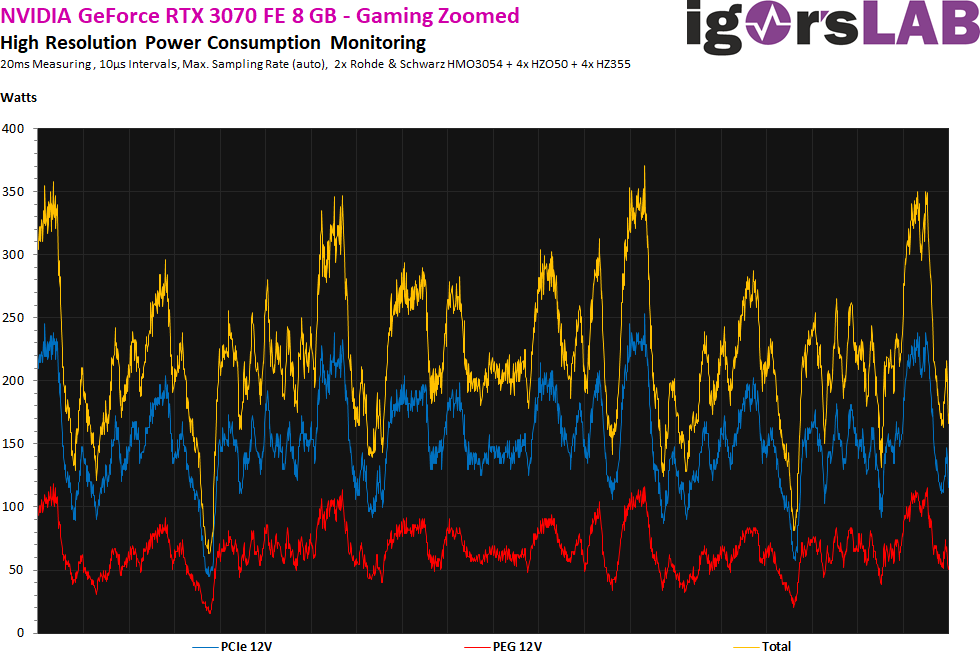 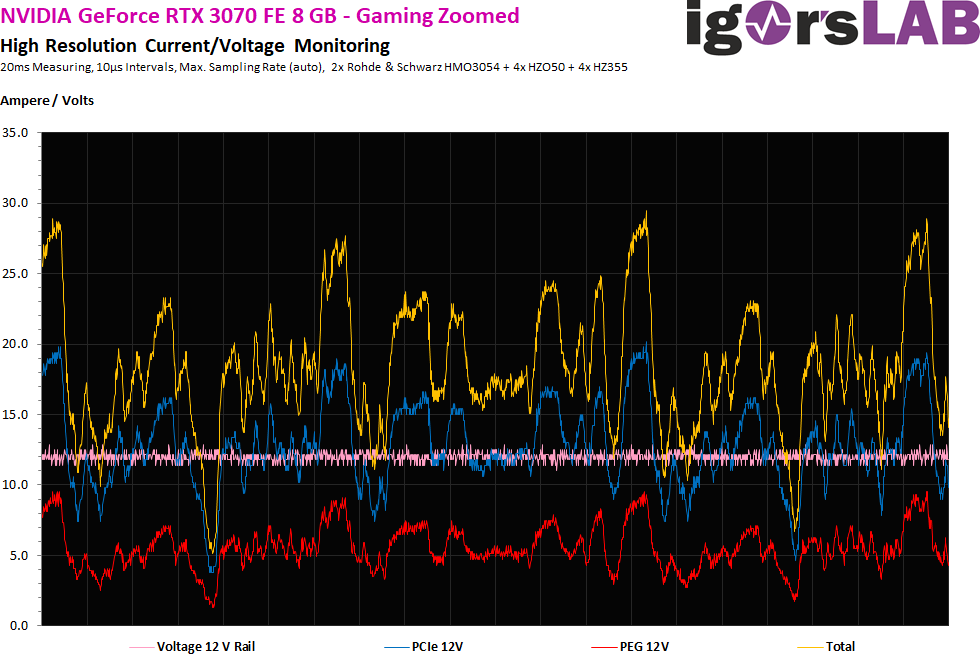 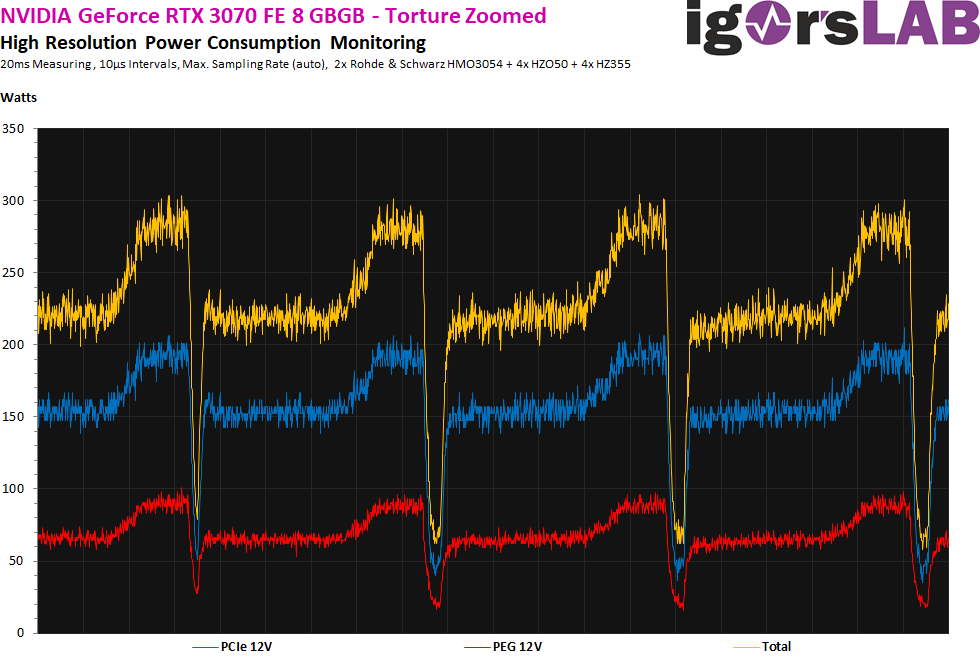 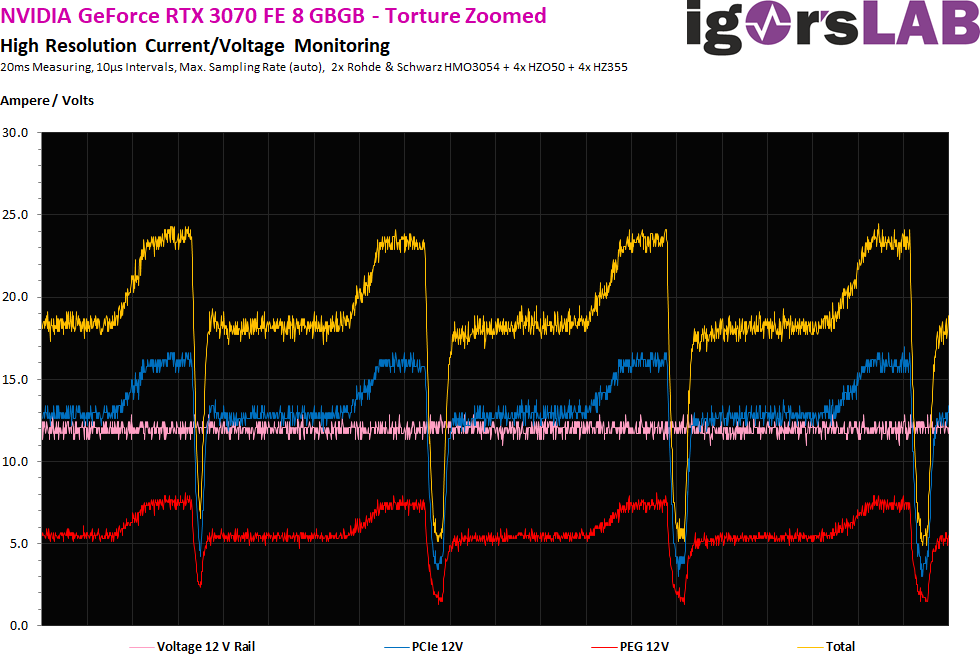