Our forum member "Mr. Gurke" contributed a user news today and wrote about the Indiegogo project. Of course you should be happy to share in this and therefore now like to leave the sole word to the forum activist and then I'm out…

Do you sometimes feel that way? You only want to look up something on the big internet very briefly and Schwuppdiwupp comes from the stick to the stick. That's what happened to me today, and before I got to Indiegogo through the intricate ways of the Internet. I already knew Indiegogo as a competitive platform for Kickstarter. So I browsed the platform a little bit and found the following cool project: 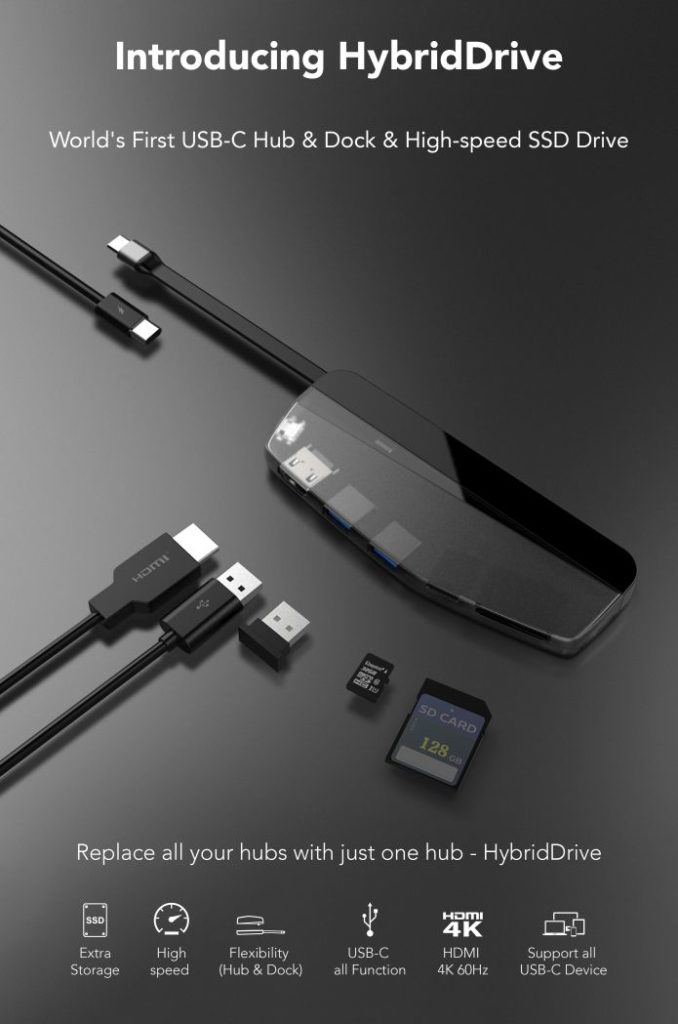 With a funding target of €9551, it was already financed within one day. Now more than 100,000€ have been raised. There are only 110 pieces left, so being fast is definitely worth it (if you think you feel the ultimate need) ! 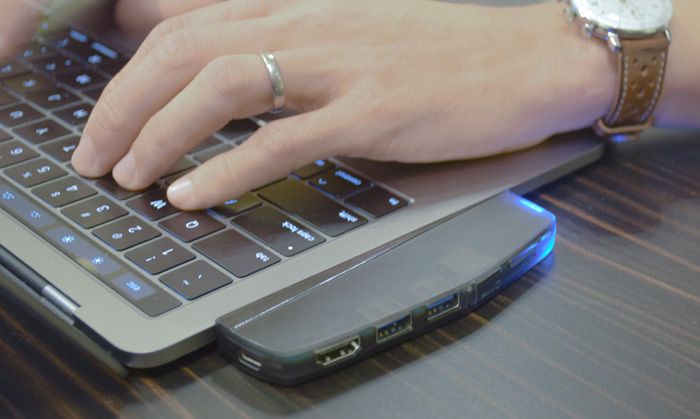 The laptops are getting thinner and thinner these days, leaving little room for connectors on the case. The best example is the current MacBook Air 13" – audio jack and two Thunderbolt connectors, that's it. HybridDrive solves this problem by connecting the hub with up to two Thunderbolt ports, to the MacBook, tablet, smartphone or other devices via USB-C and getting an SD card slot, a microSD slot, twice USB-A 3.0 Gen2 (10GB/s), once HDMI 2.0 and another USB-C port with 100 watts of charging power.

To avoid wasting a connection for an external storage medium, an SSD with up to 2TB is built in. Unfortunately, a LAN port is missing, which would probably be too large for the chassis.  (or is it called Ethernet?) 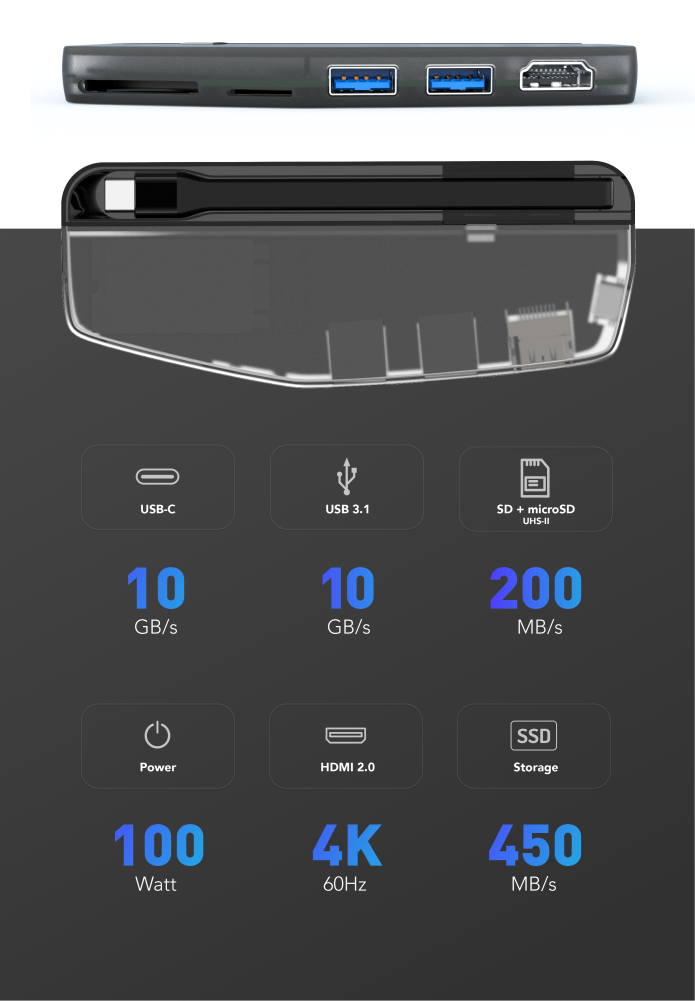 If you don't have a space on the laptop, you can also use the included cable, that you simply clip to the hub. 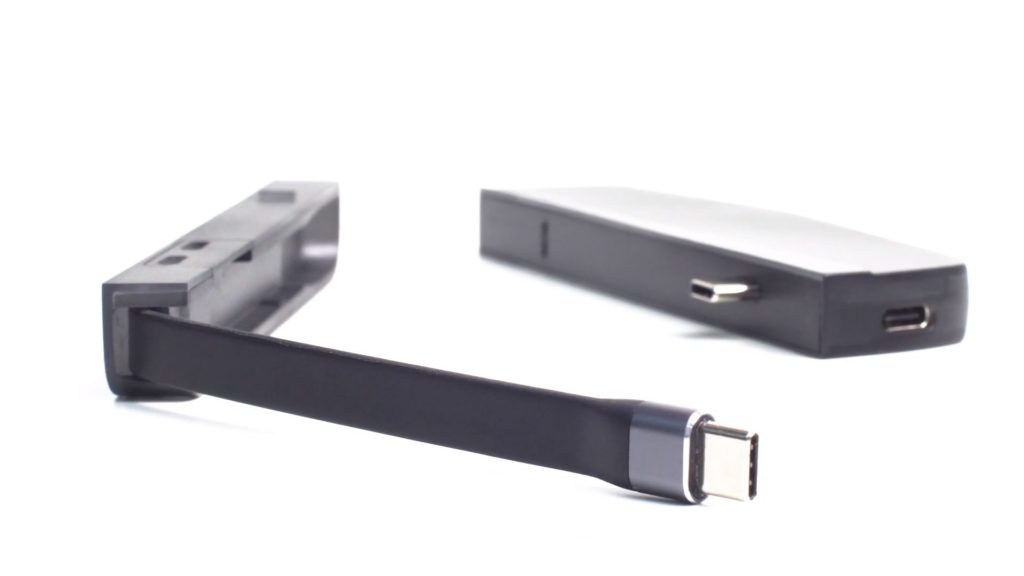 Another feature I find very interesting: You can use the hub as a bootable drive. Simply install a Linux distribution or Windows on the SSD and then connect anywhere and always work with an operating system adapted to your own needs. You can choose whether you want to have one or two ports. 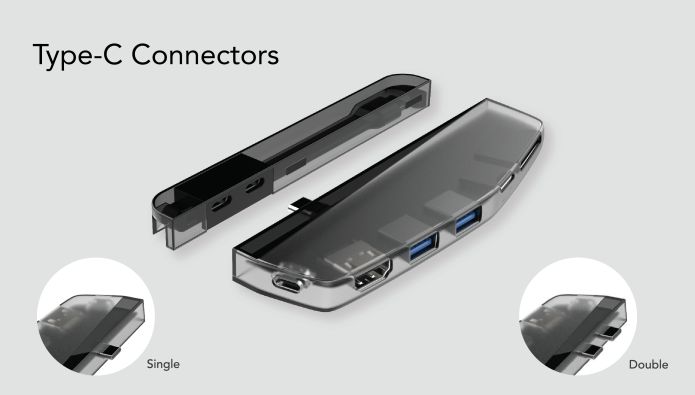 Currently there is the cheapest version with 128GB from 64€ (only 18 available) and a special edition only backer with 2TB and leather case for 209€ (only 10 available). Of the other versions, there are still 87. This project can still be done until 23.04. Support.

Why manufacturers are struggling with AMD notebooks, why AMD likes to trip itself up and why the blue conspiracy is not a conspiracy at all | Search for answers
Get Amped! Nvidia teasers the fancy online stream for the 14th May. Do we then see Ampere?