Asus uses the same board as the ROG Poseidon Platinum hybrid card, but with slight modifications to capacitor assembly. Otherwise, the Strix cooler of course has much more space, which can only be advantageous. The Kart... Asus uses its own design for this board. The two 8-pin sockets for the external power supply are followed by two coils in the input area for smoothing the tips. Asus relies on a design of 5+2 phases, with the 5 phases for the GPU being designed. Benchmarks in 2560 x 1440 pixels We have deliberately dispensed with Full HD (1920 x 1080p) as the card runs into the CPU limit even in the highest settings. In WQHD (2560 x 1440 pixels), on the other hand, the actual working environment and the kar... Benchmarks in 3840 x 2160 pixels The card is also significantly faster in this high resolution than a GeForce GTX 1080 Founders Edition or GeForce GTX 1080 Founders Edition. TitanX (Pascal) in Nvidia reference design. Overall, many titles are quite good in ... Power consumption at different loads The power consumption in the gaming loop is pretty much exactly on the point that Asus set as the Power Target with 275 watts in the BIOS. In the Torture loop, the power consumption even drops below this value. Au... Overclocking Manual overclocking with air cooling is average, if you can withstand the fan, which then operates at maximum speed at over 3500 rpm. On the one hand, of course, as always, we have the GPU lottery, on the other hand it is now m... Cooling system and backplate The special feature is the use of a "sandwich" system, which uses a kind of cooling and stabilization frame between the top of the board and the actual heat sink. On an integrated VRM heatsink in the ... Summary The ROG Strix GeForce GTX 1080 Ti OC is conspicuously unobtrusive, apart from the unavoidable RGB effects. Asus has left the Power Target at a reasonable 275 watts ex works, which is quite sufficient. Even if you...

Asus uses the same board as the ROG Poseidon Platinum hybrid card, but with slight modifications to capacitor assembly.

Otherwise, the Strix cooler of course has much more space, which can only be advantageous. The map follows the Strix line purely visually, even though some minor cosmetic surgeries have been performed.

DirectCU was yesterday and we present in advance the scheme of the Aus-PR, which should explain the map and its structure in detail. We will of course go into all areas in more detail and with our own measurements: 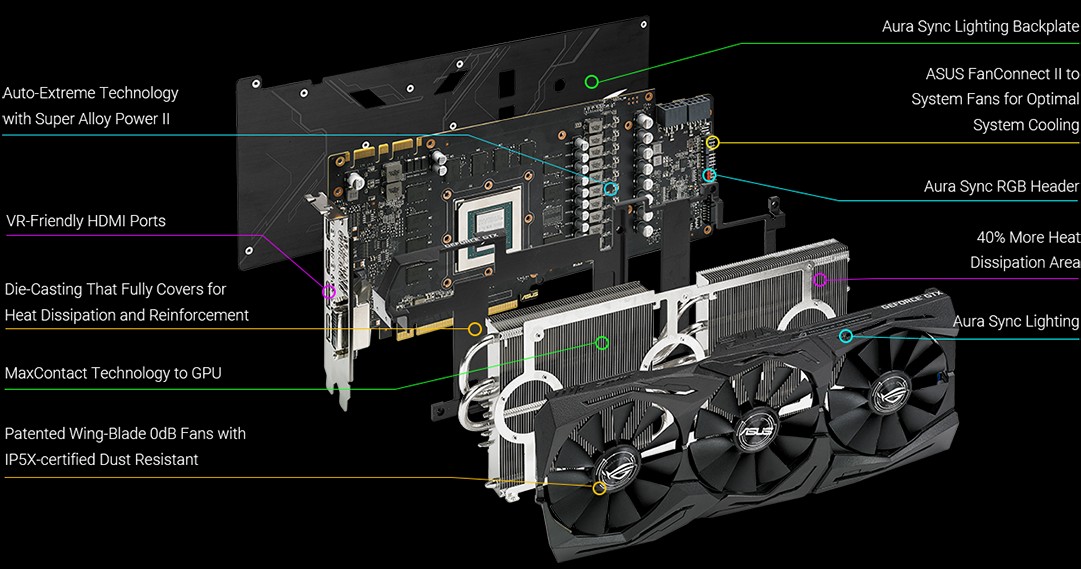 Since the actual performance of all board partner cards depends more on the actual boost clock achieved, and thus causally depends on the cooling, the power target and above all the quality of the respective chip, any test based only on benchmark bars is more of a Random snapshot of a single specimen. This is precisely why we have focused on the actual technical implementation of each model and have been able to document this very well with our equipment.

The accessories are limited to the usual three-handers such as DVD, manual and 8-pin adapters. Otherwise, there is only the card. We will discuss their exact board and cooling design separately later. The most important features are first summarized in a table:

Let's start by looking at the map from the outside. Asus, like many others, is back on a matte, graphite-coloured plastic cover that is haptic and visually fine, but does not rip off the stool. Color applications outside the RGB light effects are searched in vain.

The backplate is purely for the look and carries an RGB backlit ROG logo. The two 8-pin sockets of the external power supply are installed rotated by 180°. The logo on the top is also equipped with an RGB backlight and can of course also be customized by means of its own software.

The cooling fins are vertically aligned, which pushes the exhaust air undirected against the top of the motherboard and the front panel of the case.

In addition to the two DisplayPort jacks, the connectors are based on two HDMI outputs, which is e.g. VR glasses, of course. The Dual-Link DVI connector is a nice, but now hardly necessary entry.

The GPU-Z screenshot shows us the most important key data in advance, whereby the actual boost achieved was of course higher with our model. This in turn relativizes such theoretical data a little, so that we really want to refer to the following test results later: 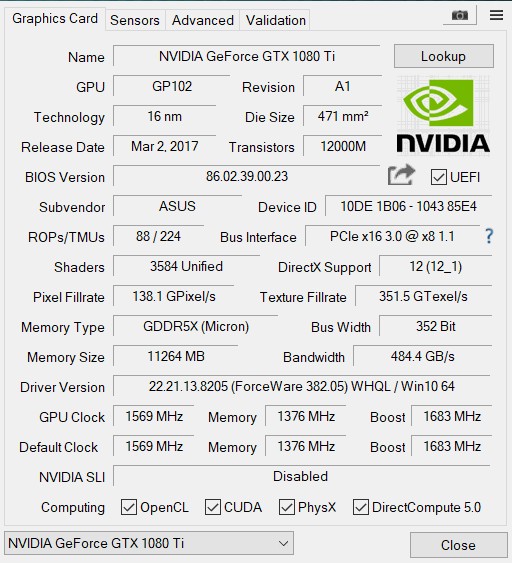 Finally, the whole thing again as a tabular comparison to the other relevant graphics card models:

The new test system and the methodology have already been described in great detail in the basic article "How We Test Graphics Cards" (English: "How We Test Graphics Cards") and therefore, for the sake of simplicity, we now only refer to this detailed Description. So if you want to read everything again, you are welcome to do so. However, we have improved CPU and cooling once again in order to largely exclude possible CPU bottle necks for this fast card.