Barely half a year after I tested the EK-AIO 240 D-RGB, the EK-AIO Elite has been added. According to EK Waterblocks, the regular EK-AIO became one of the best-selling articles after a short time, so that the company would like to expand its own assortment a little more. The design has been largely retained, but the polarising RGB acrylic pump block has been replaced by a more elegant revision in black nickel with an illuminated EK logo. What has changed from the previous model and how the new water-cooling performs in the test, you will find out in the following article:

Unchanged is the box in which the AIO (hopefully) will find its way to you safely.
Black writing on a white background, the product image with RGB lighting and the EK logo are the only splashes of colour. The reverse side provides information in English about exact dimensions, contents and features. On the narrow side is a short list of the most important features in several languages. 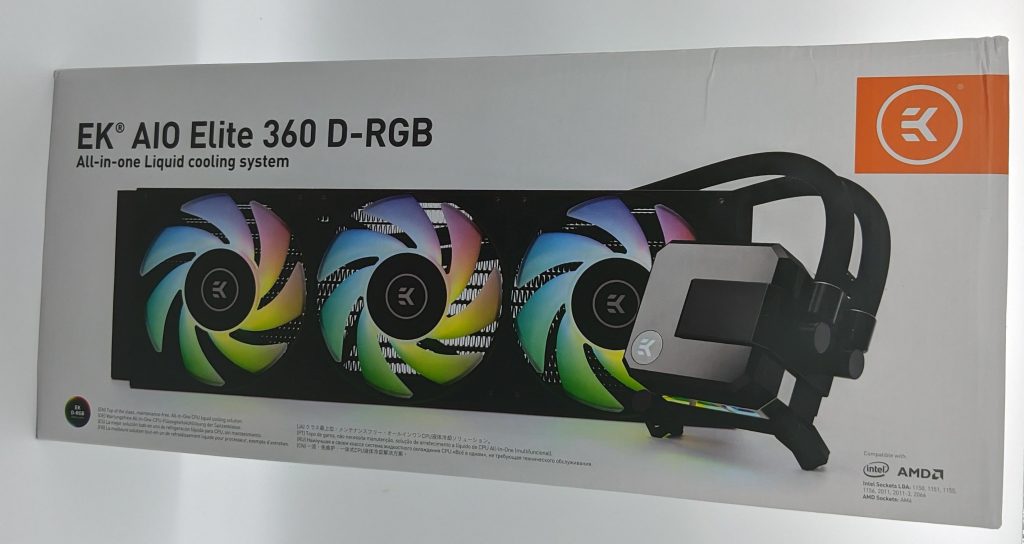 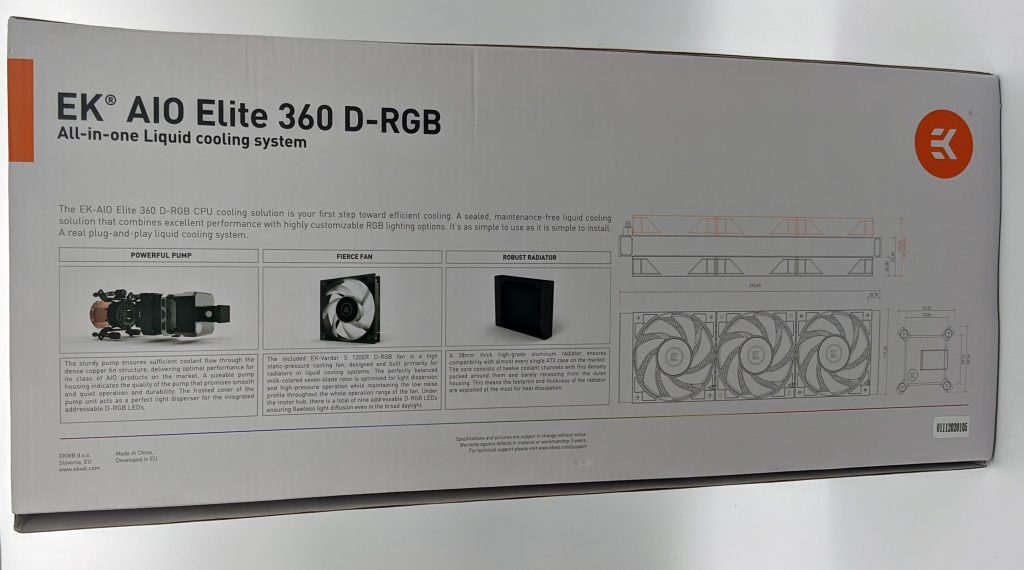 Instead of the usual cardboard tray, EK uses foam to protect the AiO. The enclosed manual deserves its name, because it describes the installation in detail on 12 double pages per language. But a look inside the packaging already gives an idea of the upcoming bag madness. 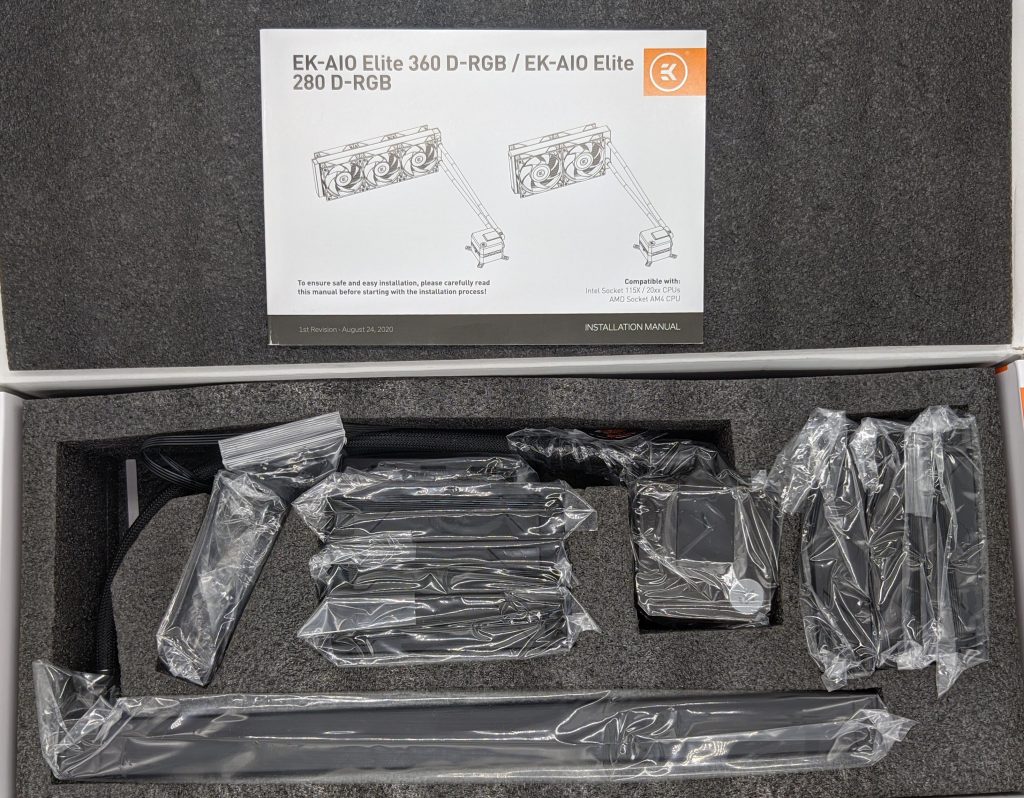 Each fan, accessory and screw set is individually packed and partly even sealed, so unpacking it unfortunately produces a considerable amount of plastic waste. On the one hand, individually labeled packages are of course pleasant, on the other hand, the illustrations and descriptions in the manual are good enough to find the shown parts unsorted within seconds.
This double-edged sword is ready to open the whole bags. 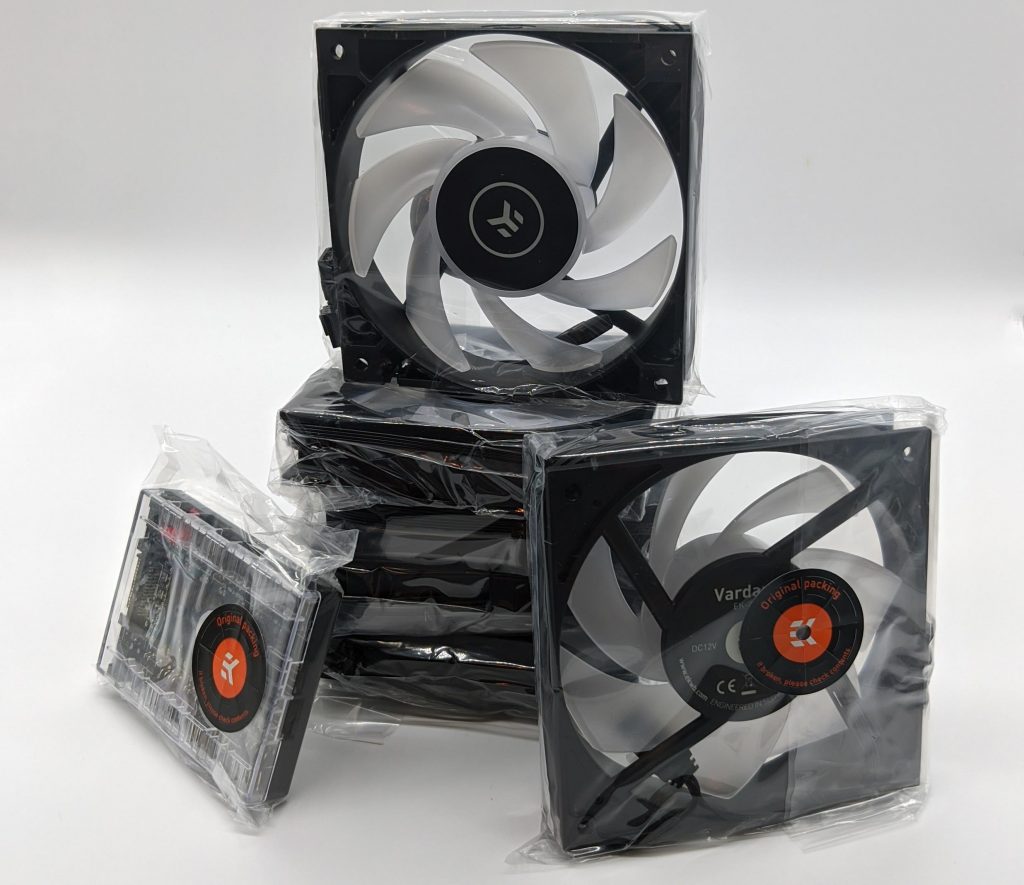 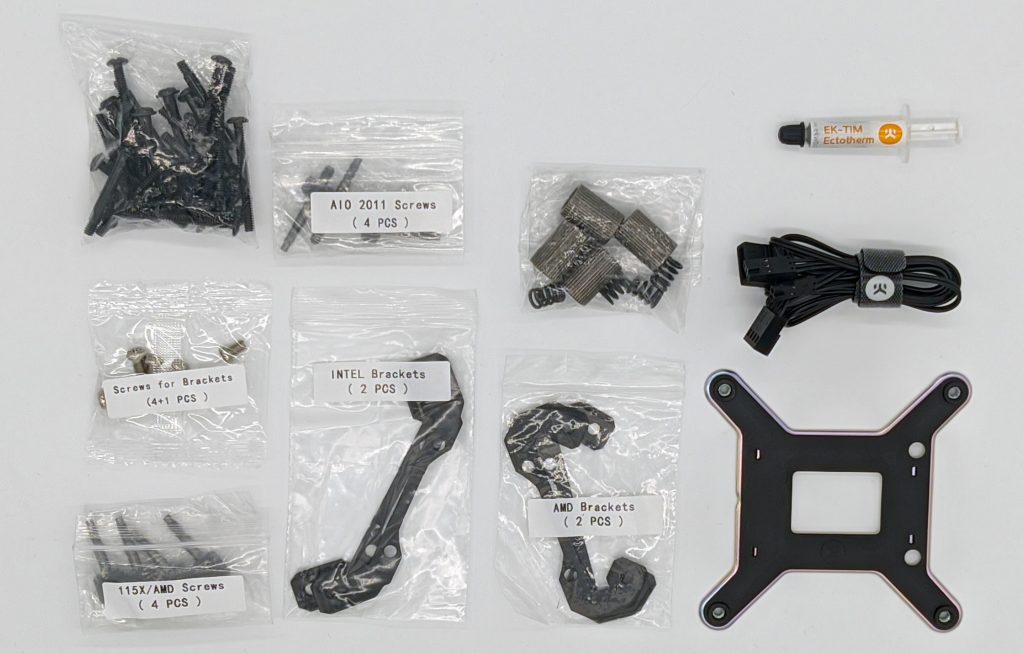 In addition to the mounting accessories, the EK-HUB is also included, a slimmed-down EK Loop Connect Controller, so to speak. With power supply via SATA (no Molex, Yay!) up to seven 5V ARGB 4-pin PWM fans can be operated. The control is done via a PWM connector on the mainboard, the RGB lighting is done via 3-pin 5V ARGB. As the name suggests, the EK-HUB therefore has no logic of its own, but rather forwards a signal to all connected devices. 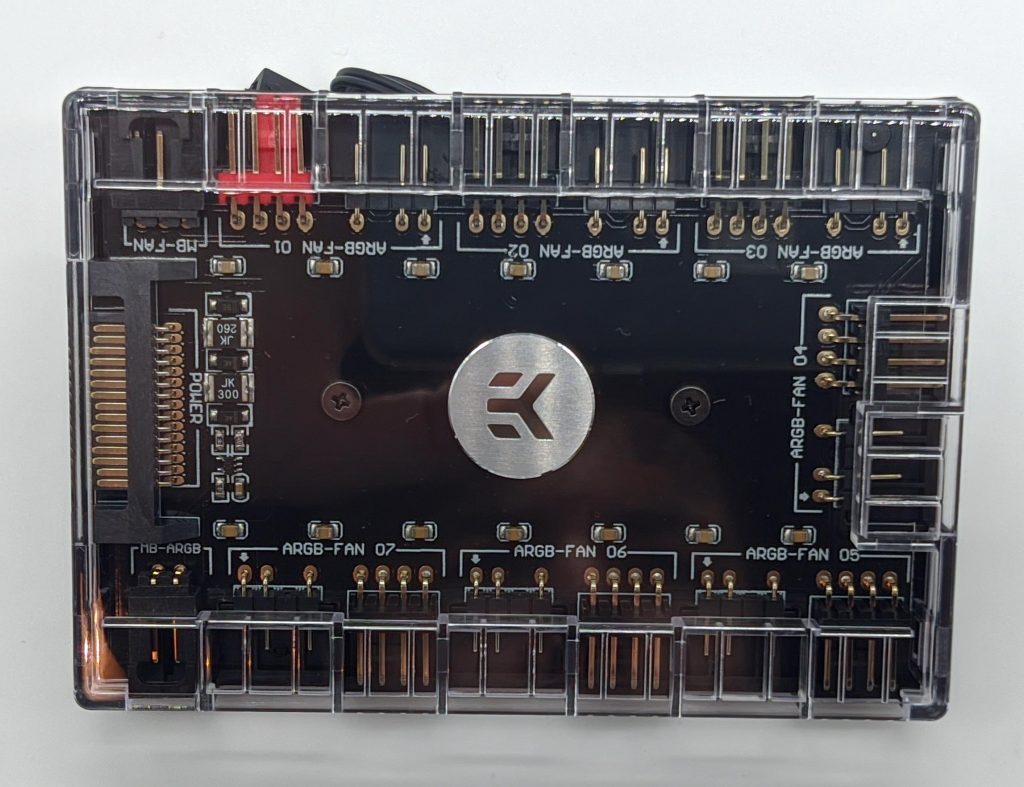 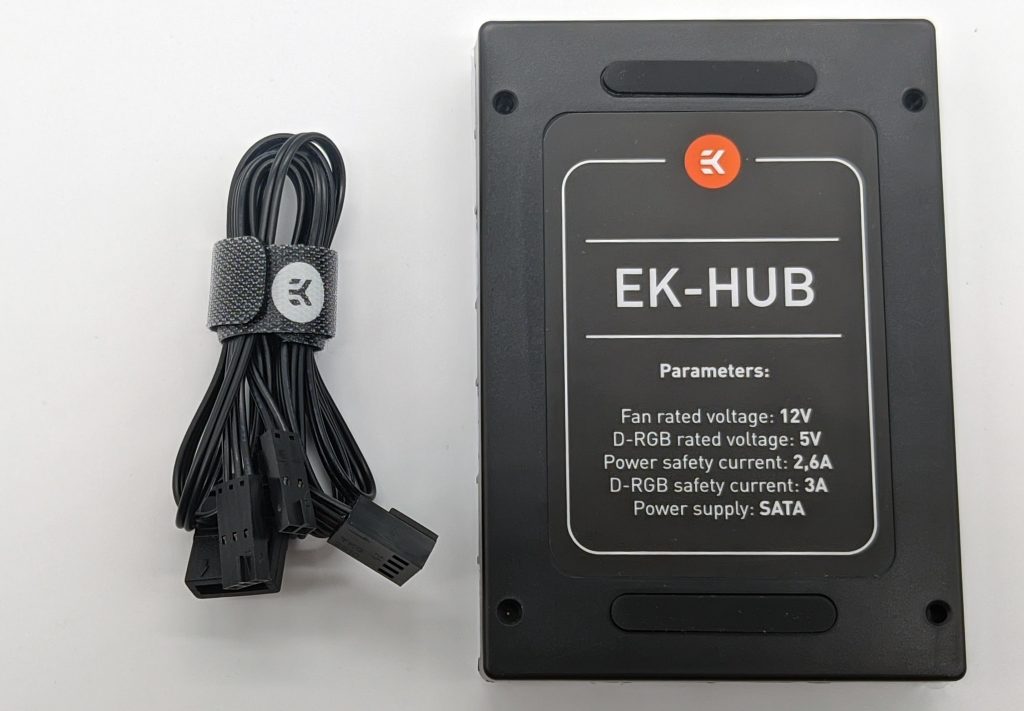 Freed from the plastic, a first glance at the EK-AIO elite itself is also allowed. The pump block lies surprisingly heavy and cold in the hand, the black nickel gives the water cooling system a really high-quality impression. 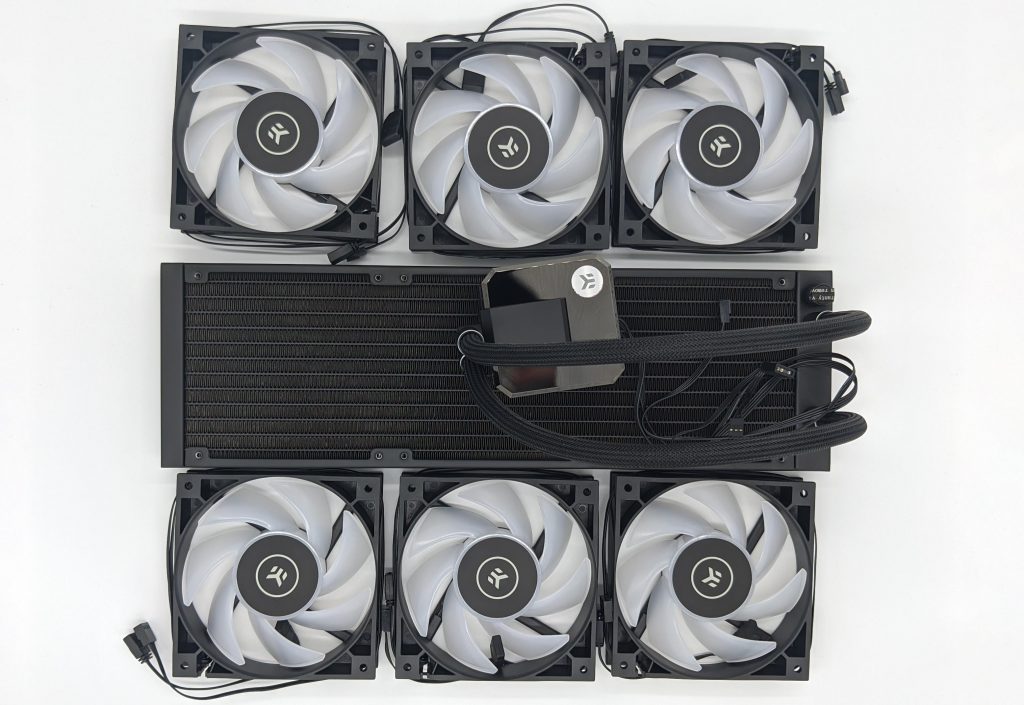 The very good workmanship throughout is also reflected in the radiator, only a handful of Finns dance a little out of line: 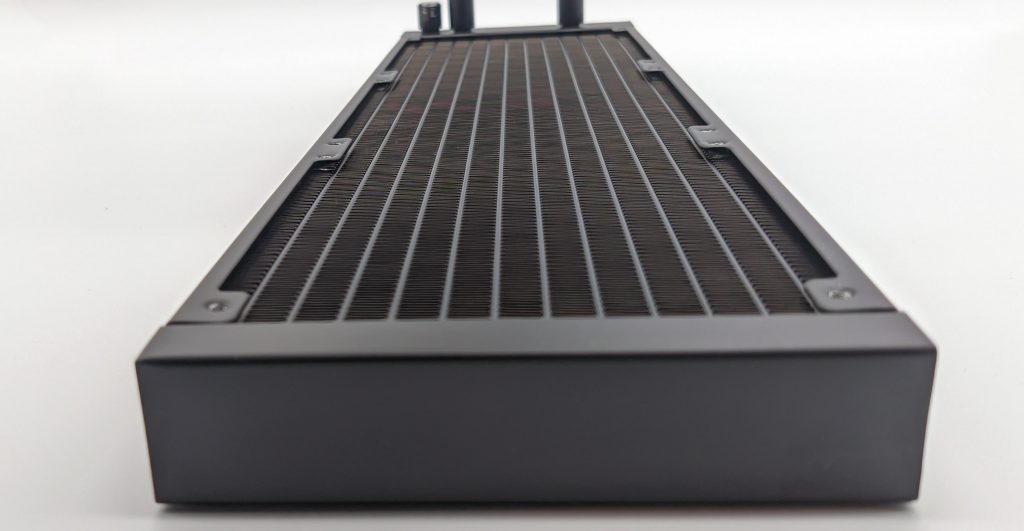 Heavy “radiator cellulite” is therefore not present this time. Nevertheless, once again the hint that some bent fins do not significantly affect the cooling capacity and function of the radiator. 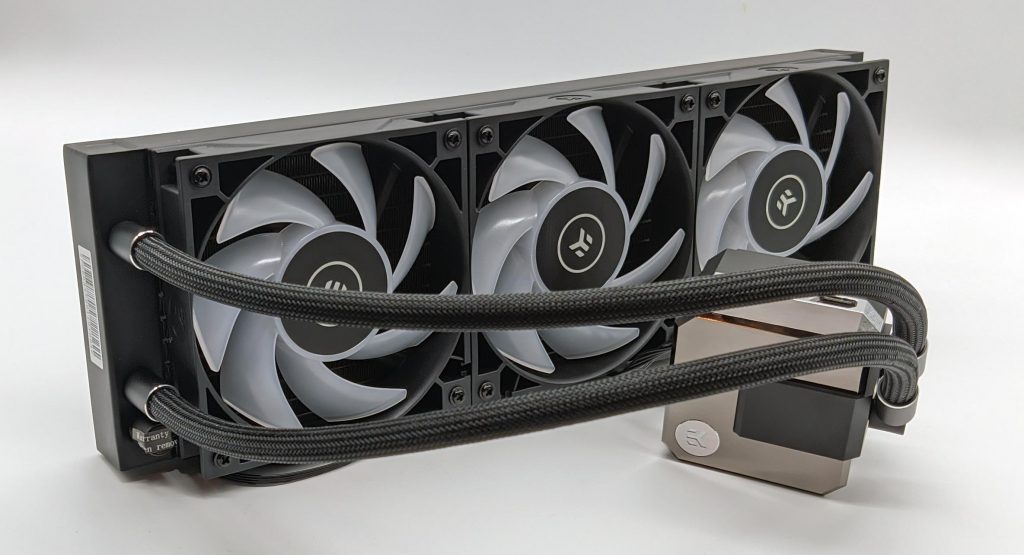 At the time of this review, there is no dedicated video tutorial from EK on this new model, but there hasn’t really changed anything about the installation of the last EK-AIO. Here again the video worth seeing:

With the current Ryzen platform, the existing backplate of the mainboard is once again used. The two AM4 brackets are mounted to the bottom of the pump block with four screws. Four more screws, which also serve as spacers, are placed in the backplates of the mainboard and the pump block on top. A further four spring-loaded screws are tightened by hand for the appropriate contact pressure. The whole thing is easy to do, a third or double-sided adhesive tape is not necessary.

Depending on the case, however, the installation with a fully equipped fan could be a challenge, because a total thickness of 77mm in the push/pull configuration doesn’t fit everywhere. Alternatively, three more fans are not bad for the general airflow. 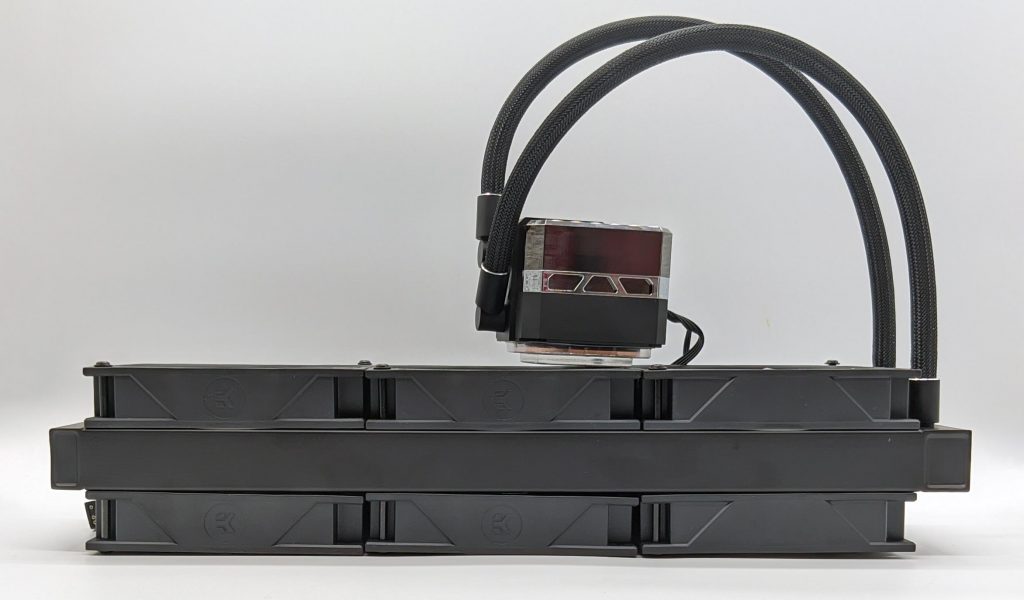 There is still a small tripping hazard during installation, because the screws for the radiator are of different lengths for the front and back. So watch what goes in where! As with the last EK-AIO, the connections on the pump block are also on top of each other, not next to each other as usual. This restricts the angle of rotation considerably, but should still be sufficient in most cases. Nine aRGB LEDs per fan let the Vardar-S shine in all colors of the rainbow, but rubberized contact points to the radiator and housing have been omitted. Another small tip for lazy cleaners: do not remove the protective film on the pump block until the very end, the high-gloss finish magically attracts fingerprints. Also be prepared for a lot of cables that need to be laid cleanly.

Below is an overview of the technical data, a complete overview is available on the manufacturer’s website. 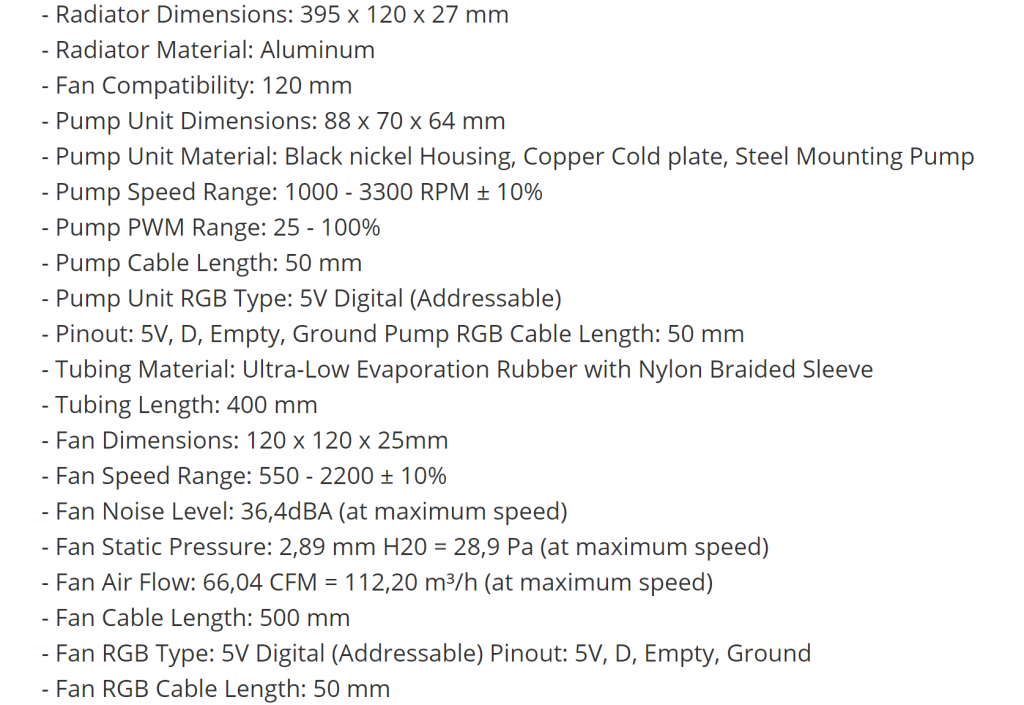 With hardware recycling to a DIY NAS at home | TrueNAS Core Showcase
The hotspot of the Radeon RX 6800 (XT), hurdles in the thermal grease replacement and the correct assembly sequence