If we were asked for a slightly better equipped RX Vega64 and if the range of such cards were more diversified, we would probably call the Asus RX Vega64 Strix OC. Where and how exactly the map is positioned, today's test ... Board layout Like Gigabyte and Sapphire, Asus is extremely different from AMD's reference layout, which should make the use of existing full-cover water coolers impossible. Asus relies on 6 phases with Doubling, so that in... With a current BIOS and the newer drivers, the peculiarities of the benchmark results, as we were able to see during the review of the Sapphire RX Vega64 Nitro+, finally disappear completely and the maps now do exactly what you can from... The overall picture does not change much, even if the Vega cards break in a little more in a few games. But then it almost doesn't matter if reference or board partner card. Shared suffering is half suffering, although it is never a real d... Power consumption at different loads The power consumption in the gaming loop is at the measured approx. 275 watts in Balanced Mode about 5 watts below what could be measured at the reference in the default BIOS. This is all the more astonishing because ... Overclocking and undervolting The conventional overclocking by means of an even higher power limit and more clock counteracts the current cooling concept, because the rather quiet cooler gets along quite well with what it has to dismount ex works. More on the other hand... Cooling system and backplate Of course, the generated waste heat is directly related to the recorded power, for which the cooling solution is responsible for optimum dissipation. And this is precisely where we are faced with minor problems, which we are... How and where can we classify the Asus RX Vega64 Strix OC now? The map is in itself quite a solid story, apart from the hot tension converters. The quality of the workmanship is neat and the component selection is ...

If we were asked for a slightly better equipped RX Vega64 and if the range of such cards were more diversified, we would probably call the Asus RX Vega64 Strix OC. Today's test will show where and how exactly the map is positioned.

In contrast to Sapphire's heavyweight RX Vega64 Nitro+, the Asus RX Vega64 Strix OC is a rather inconspicuous card at first glance, but unlike the completely unlit Gigabyte RX Vega64 Gaming OC, it can still be illuminated at least later after unpacking. can bring.

With the currently still available Vega64 cards, however, one can no longer distinguish between individual positionings within this chip class due to the really already presusb prices. You can be happy if there is one. Interestingly, availability in Europe is often better than in North America or Asia, for example.

The three fans with a rotor blade diameter of 9 cm each sit in an opening with a diameter of 9.2 cm. A total of 11 rotor blades per fan, with their special shape, mainly provide airflow and turbulence and less static pressure. This should be helpful to the cooling concept.

The backplate is embossed with the RGB backlit ROG logo. The backplate, which is not used for cooling, is therefore optical in nature and also stabilizes the not very light card. 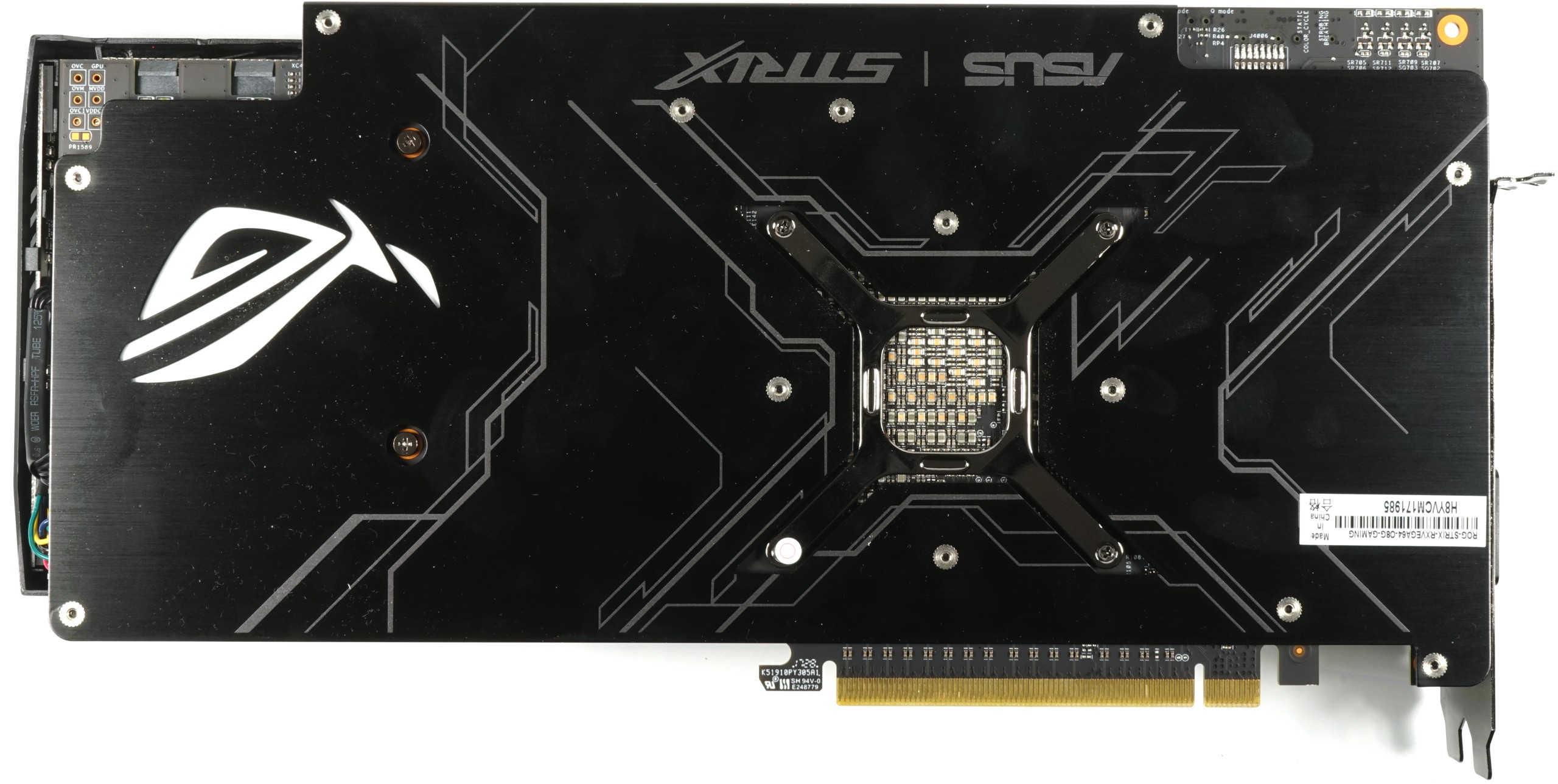 You can already clearly see at the bottom of the map that Asus is betting on vertically arranged slats and now offers a real 2.5-slot model instead of the usual flat cards. This creates a significantly higher cooling surface.

The top also clearly shows that Asus has remained true to his form and design. In addition to the usual dark plastic cover, there are still RGB effects on the ROG lettering. In addition, the two 8-pin power supply connections are positioned here, which have been rotated and also moved downwards.

In addition to the five 6 mm heatpipes, the closed end of the card shows the two PWM-controlled fan connectors for optionally connectable housing fans, an RGB output, and the internal fan and LED connectors. 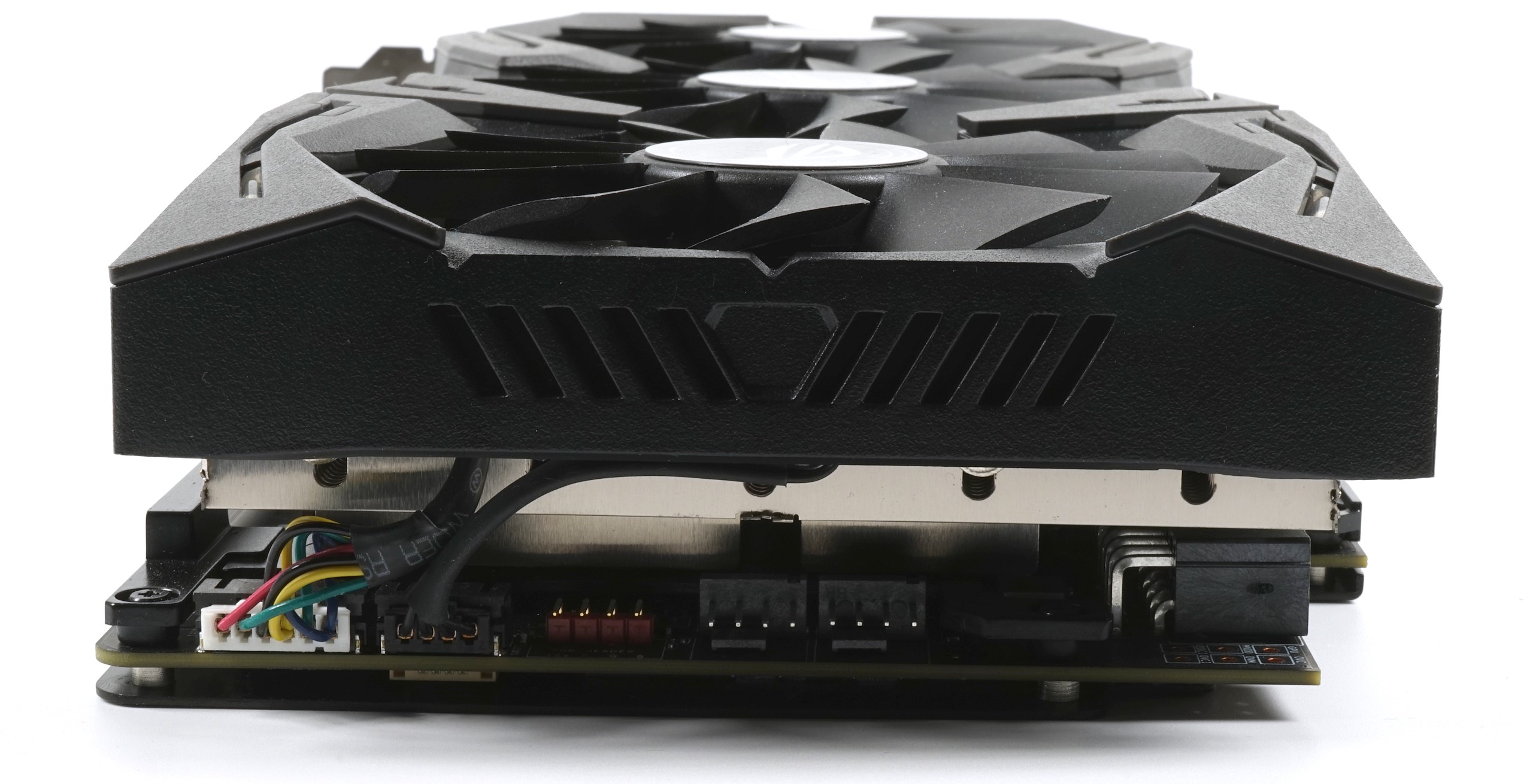 The slot panel has five ports analogous to the reference card. Two HDMI 2.0 ports and two DisplayPorts 1.4 are available to the user. This is completed by a DVI-I connector (Dual Link).

Finally, let us take a first look at the technical data. The value displayed as the maximum boost clock, on the other hand, is rather a wishful thinking, which is unlikely to be achieved within the set power limit or at all.