The very large Ryzen 5 5950X with 16 cores (32 threads) and the Ryzen 7 5800X with 8 cores (16 threads) will be presented in a timely follow-up, as sampling is randomly performed in two waves. While this increases the tension curve and visibility, it also takes a little bit of effort and does not exactly serve the purpose of clarity. 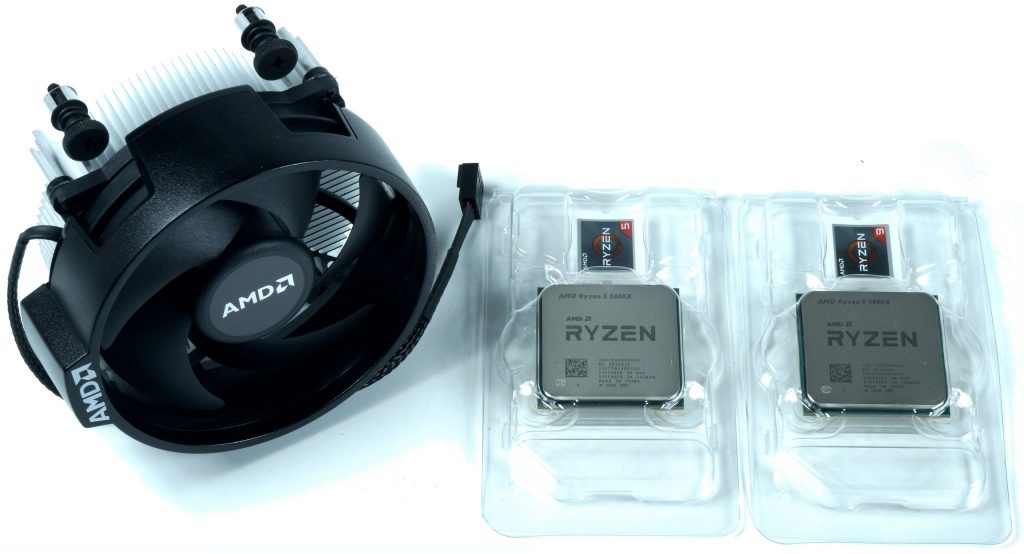 The architecture of the new CPUs including all slides I had already discussed in detail. A significant increase of the IPC, together with significantly more clock speed, should also be able to replace Intel as gaming champion. The proof is due today. The prices turn out as expected and of course you can be curious about the availability at the end. For all of you here again the most important slides of the presentation as PDF to browse through. The pictures speak for themselves, the rest will be proven by tests today and later. One way or another.

Since Intel unfortunately can’t (or doesn’t want to) provide samples over a longer and reasonable period of time, and I won’t let myself be put under any conditions or pressure, I’ll only use my self-acquired Core i9-10900K and Core i5-10600K in today’s test, which also happen to be the appropriate counterparts. This restricts the variety for the upcoming tests a bit, but since Intel doesn’t have anything to offer above the i9-10900K anyway, this is surely still bearable.

For this purpose, I am placing the Ryzen 9 3900XT and the Ryzen 3600X as direct counterparts from the generation that has now been replaced, so that in the end there will be six CPUs, which I will analyze more closely in the course of these tests. But in order to make the test more realistic and because the feedback of the readers is also important to me, I varied it a bit this time and also offered different settings. Today’s article will almost exclusively deal with gaming and the version as a base for the graphical output, the detailed workstation and studio test will be available when all CPUs have arrived here and any problems that have occurred have been clarified. Pre-work is already done, despite sickness related absence and delay. 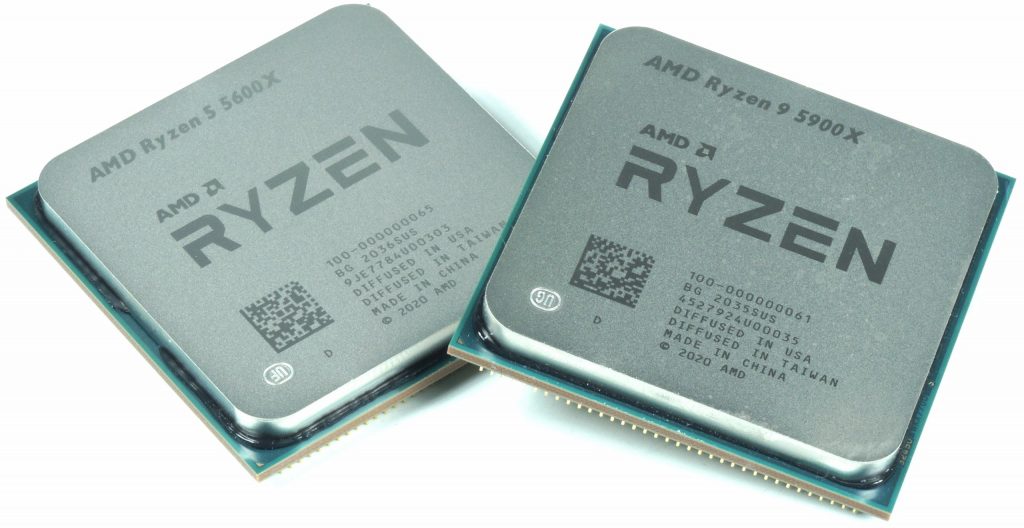 I have decided not to benchmark all games, but to do so in a very target-oriented way and in much more detail than before, especially those games that (distributed in equal numbers) were best suited to the respective manufacturers. A total of 5 games, but in all four resolutions and with lots of details, should then complement (not replace) all the reviews of the esteemed colleagues, who were able to test myriads of games in the team, but can’t go into the whole background at all. What I will show today are the cases where the new Ryzen performs particularly well, where it performs as expected, and where there have been slumps in performance that I will explain in more detail.

In the past, it was hard to please anybody, some people wanted realistic tests with higher clocked memory (as many users do based on the XMP profiles of Intel CPUs), others swear by the specifications for the clock of the memory controllers. And can you enable Enhanced Turbo on Intel and what about PBO on AMD? Questions and questions and in the end you can’t please anybody.

The old Ryzen 9 3900XT and 3600X run on DDR4 3600, which is still a certain OC, but it’s almost negligible in many situations, because the actual game takes place somewhere else. As hard as it may sound, but more than just decoration, the Ryzens of the 3rd generation are the best. Generation now no longer, unless you play in Ultra-HD and then the graphics card screams for help. But I don’t want to anticipate the tests. What is more interesting is the maximum advantage a Ryzen 9 5900X can get out of what is often considered a simple memory-OC with stored profiles. The Ryzen 5 3600X then turns out to be very similar within its capabilities, but does not quite reach the peak values. 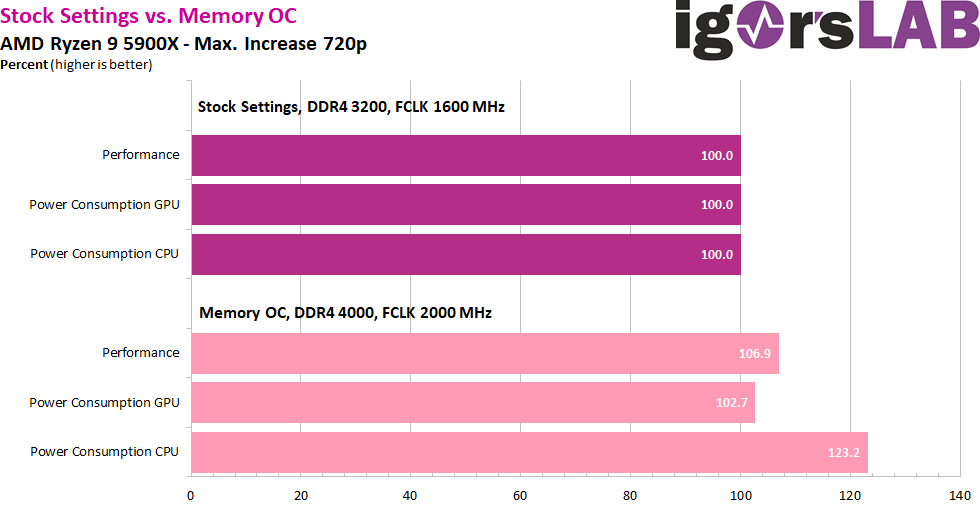 The new Ryzen achieve up to 7% performance increase for up to 800 MHz more clock speed. The power consumption of the CPU increases with less limitation by up to 23%, that of the GPU by just under 3%. I have achieved this in the ideal case and at 720p, normally this will have a much lower effect. But about 5% is actually always possible with Ryzen even on Full-HD. A benefit to take with you. Everything from WQHD onward is put into perspective, because the graphics card is becoming more and more the limiting link in the chain.

With Intel it looks a bit more extreme at first glance, but apart from the memory OC, the “Enhanced Turbo” is now added, which you can really see as a factory cheat without a guilty conscience and which goes far beyond PBO, as long as AMD doesn’t rely on predefined performance profiles. However, the almost 1000 MHz more memory clock and the Enhanced Turbo only result in a good 9% more performance in the best case, but instead with almost 30% more power consumption of the CPU in 720p, because the bottleneck widens a bit to the spout. In addition, the GPU consumes almost 6% more power. Also fits about the gain in AMD, now, with Zen3. 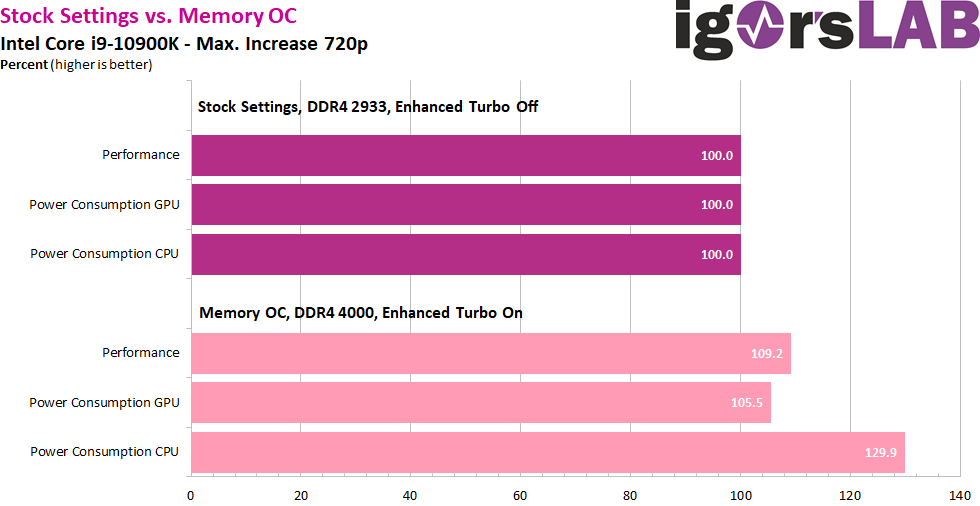 …and the self-created, MCU-based measurement setup for motherboards graphics cards (pictures below), where in the end the thermographic infrared images are also taken with a high-resolution industrial camera in an air-conditioned room. NVIDIA’s PCAT system is also used.