After all, the real availability for AMD's new consumer flagship, which AMD is announcing for 25/11/2019, has finally become concrete. This means that we are almost three months behind the market launch, which was announced in the summer, but it is still in time to fully enter the Christmas business. Incidentally, this is exactly the day when Intel Intel won the Core i9 XE of the 10th "Cascade Lake-X" to the market. There are coincidences…

With the long-awaited Ryzen 9 3950X, AMD now offers 16 cores in a normal consumer CPU outside the HEDT platforms for the first time. At Intel this is not possible, because in addition to the much larger structure width of the older manufacturing process, it is above all the small housings of the socket 1151 that make a larger CPU on the part of Intel (for the time being) impossible. A Ryzen and a Core i9 from Intel's HEDT platform have roughly the same space under the heatspreader, leaving AMD with enough space for an IO chip and two chiplets. AMD still has the 1331 pins compared to the 2066 contact surfaces of Intel's current enthusiast platform. 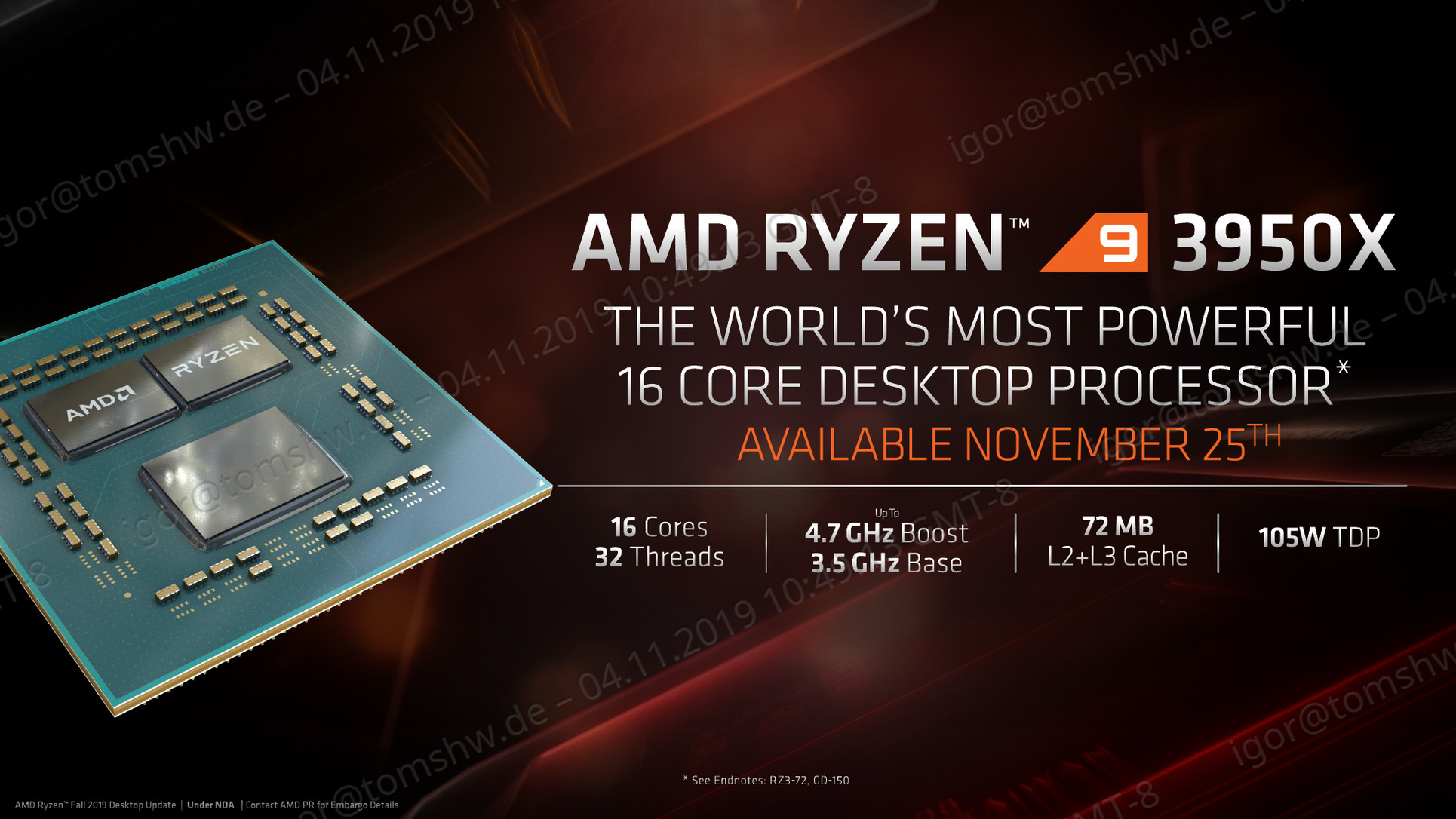 In terms of prices, AMD compares its own slides with Intel's current 12-core Core i9-9920X, which significantly outperforms AMD's target of around USD 750 with an EIA of around 1200. However, a look at the current street prices shows that the Core i9-9920X is already at approx. 720 Euro incl. Vat. passed down. The 16-core Core i9-9960X has also already fallen to 920 euros, which would have been more likely to be a real core-to-core view. But then it wouldn't be marketing but real-life slides. 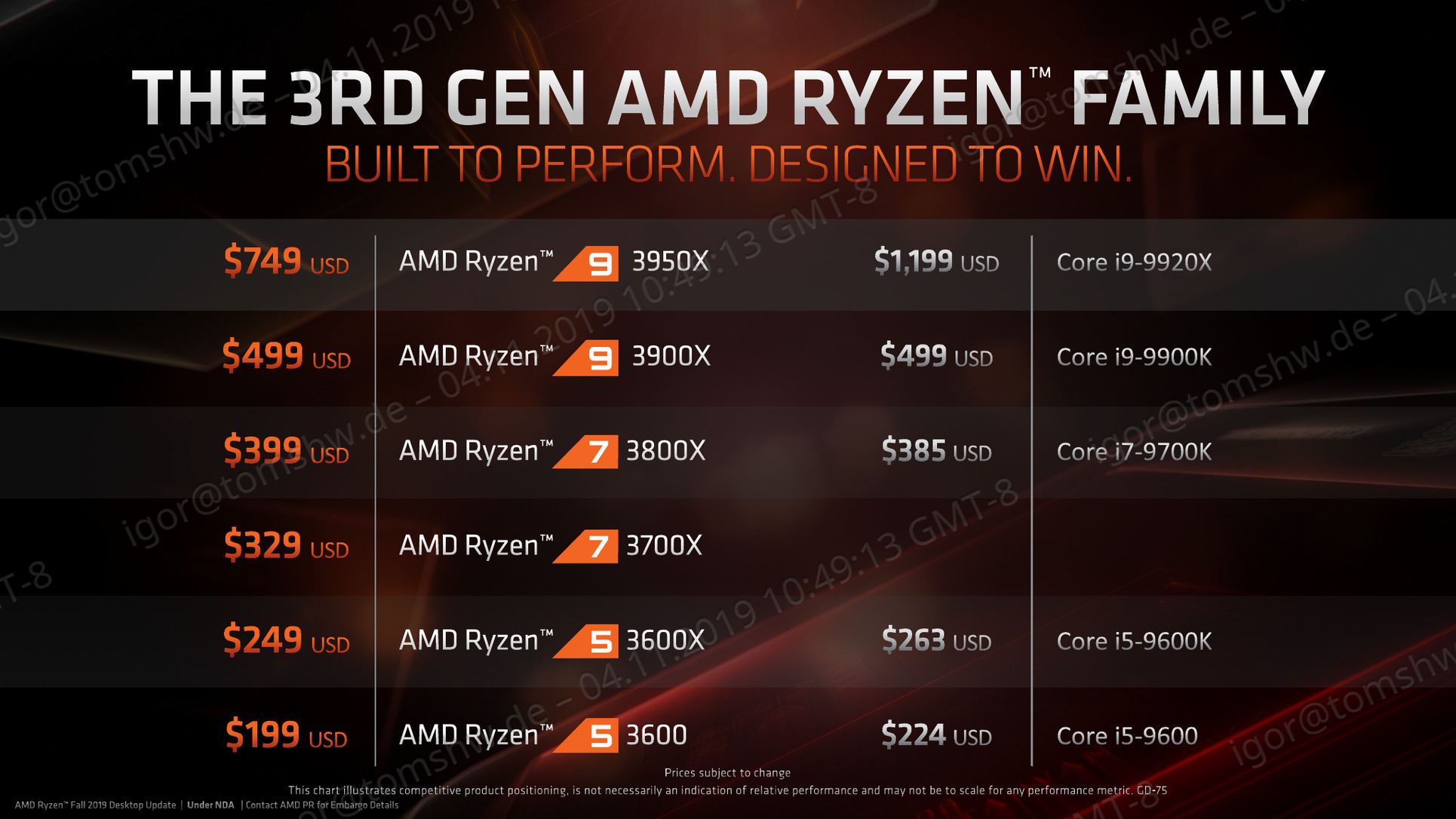 It is also interesting in this context that the summary of the listed tests at the end of the document ("Endnotes RZ3") also mentions Intel's 16-core in places, but these tests are not listed in the slide. Either this is a typo (unlikely), or these slides have been added (as well as those with the extrapolated Core I9 of the 10th century). generation) (which is a pity).

And also in terms of the boost clock, hidden in the final notes, there is an interesting sentence that is rather diffuse and ends up listing so many factors that one inevitably feels reminded of a pudding, a wall and the conscious nail:

The performance preview is interesting, because compared to a Ryzen 7 2700X, the flagship of the second generation, the Cinebench has an advantage in single-thread performance with 22%, which is another one percent more than one counted as the Ryzen 9 3900X. This should not be confused with the IPC (Instructions Per Clock), because the lead is also largely due to the higher boost clock rates of the new CPU. To what extent these will then be achieved to what extent, when and whereby also in real terms, will have to be tested. A discussion about AGESA, energy-saving plans and other things would be purely speculative at this point, because a newer version of AMD's microcode is likely to be on the rise. then it is rolled again anyway. 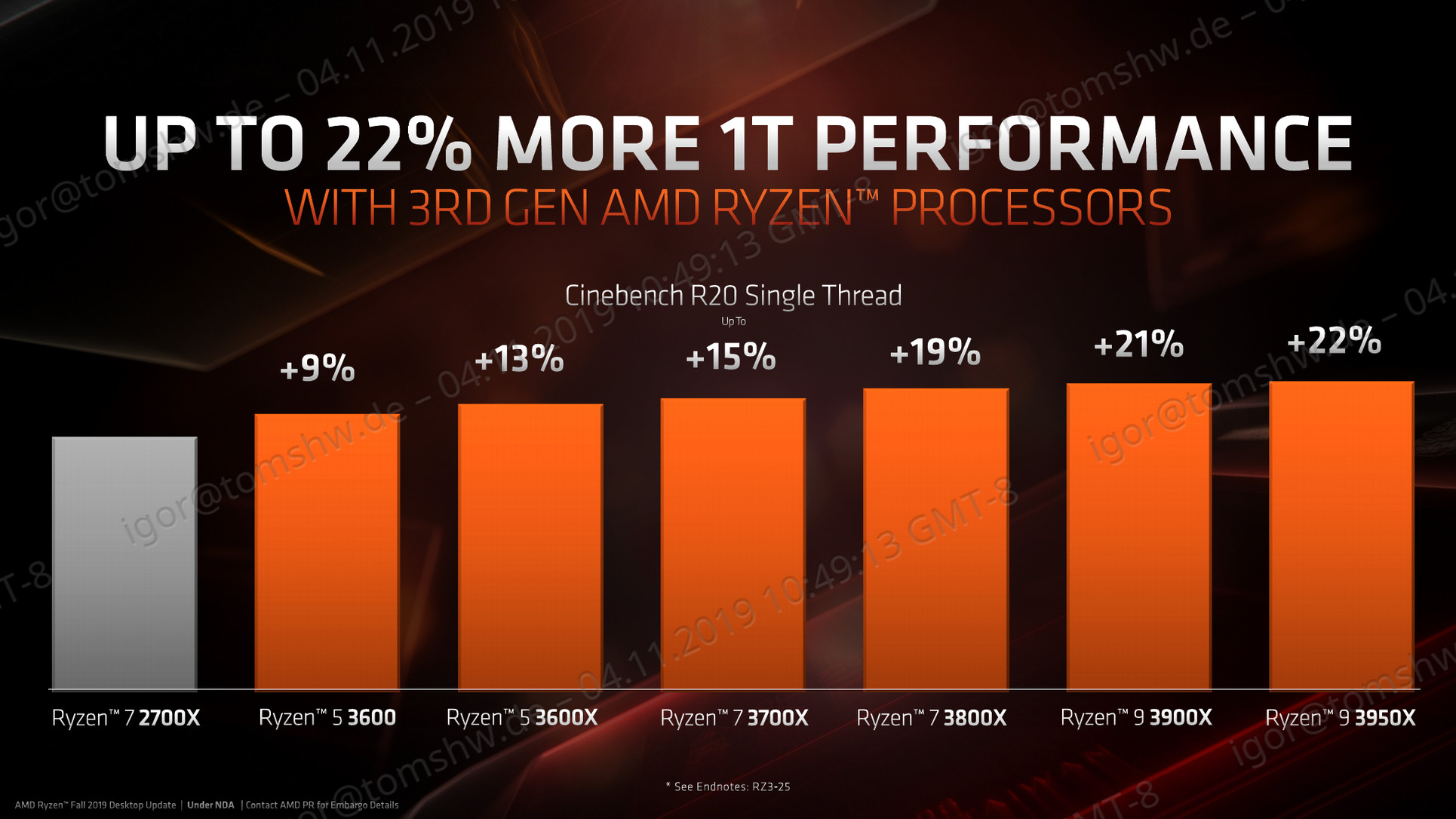 In game performance, 1080p compares to a Core i9-9900K and the Core i9-9920X. However, AMD unfortunately does not give any information about the configurations used (memory clock and size) as well as the installed graphics card, especially since some results that suggest tie could also result from a possible GPU bottleneck. So here, too, we will have to re-test. 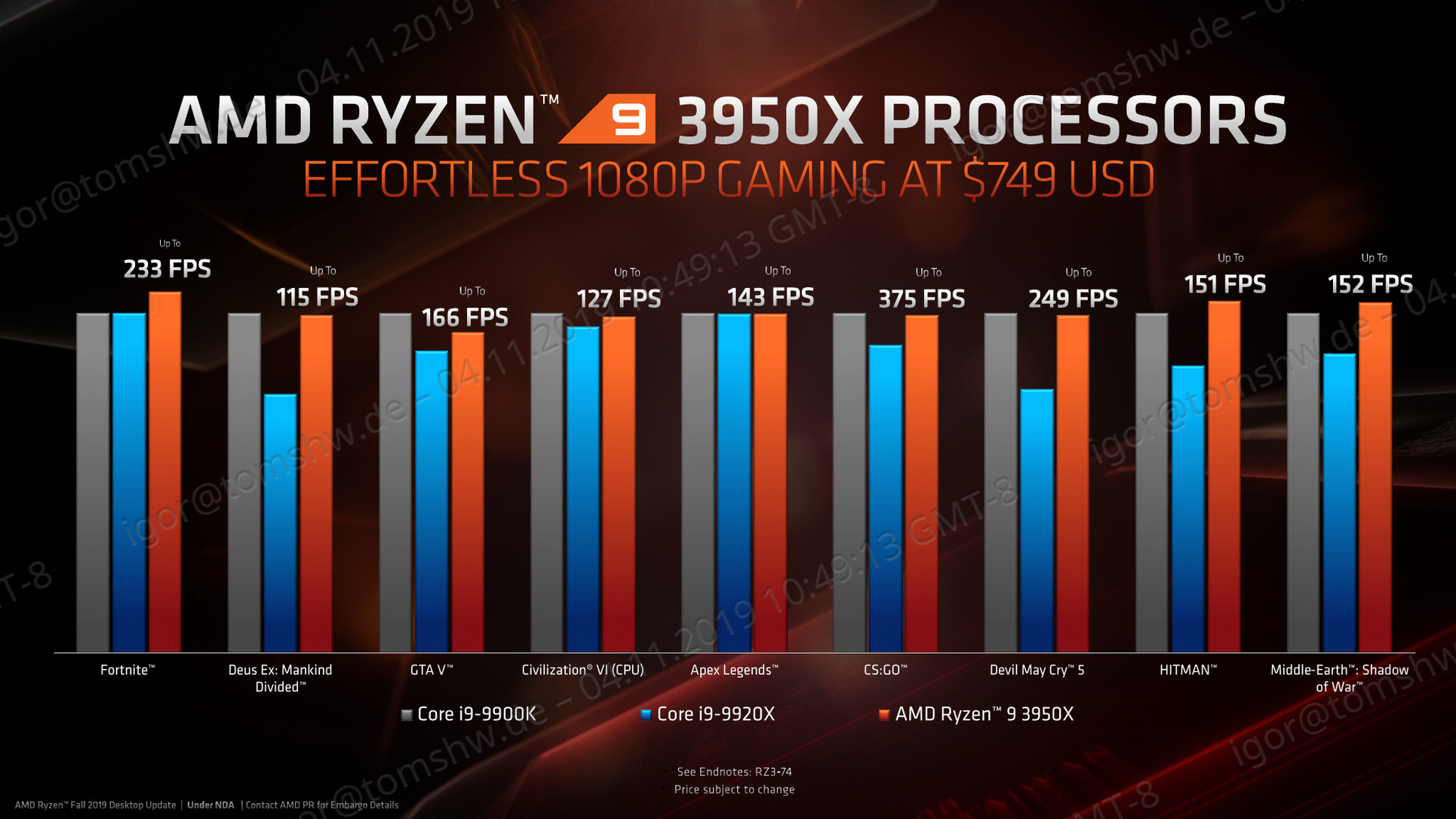 The view of the application benchmarks, on the other hand, does not come as a surprise, here AMD's bundled nuclear radiation strikes in full gloss. Nevertheless, the comparison with the 16-kerner would certainly not have been completely uninteresting at this point. 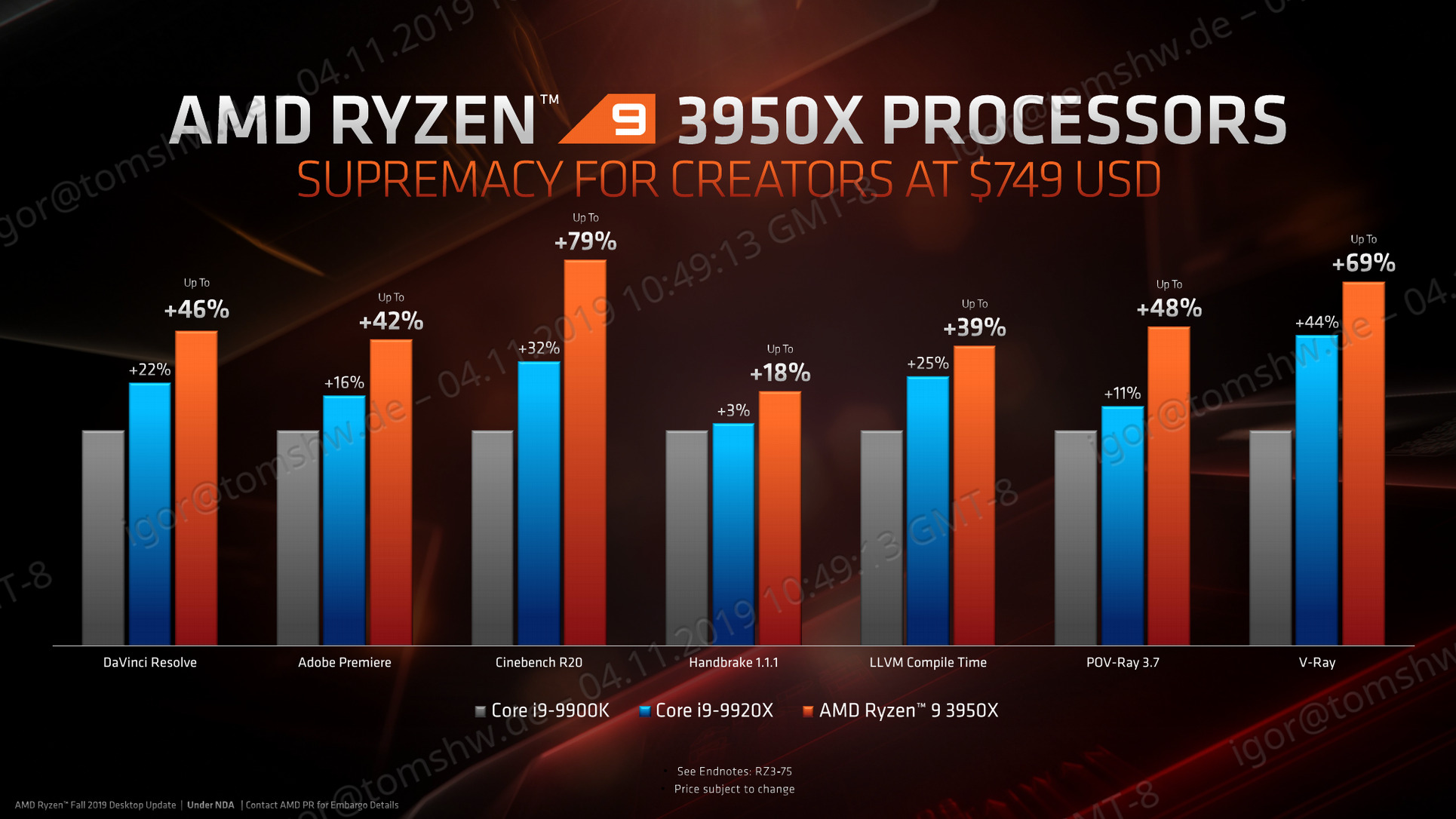 The same applies to efficiency considerations, where the trend is very evident in the direction of AMD. The 4 cores would certainly not be able to change that. For all the overall system is worth a look, because the X299 boards with the socket 2066 are inherently a little more hungry for power consumption than the 1151 boards with Z390 chipset. 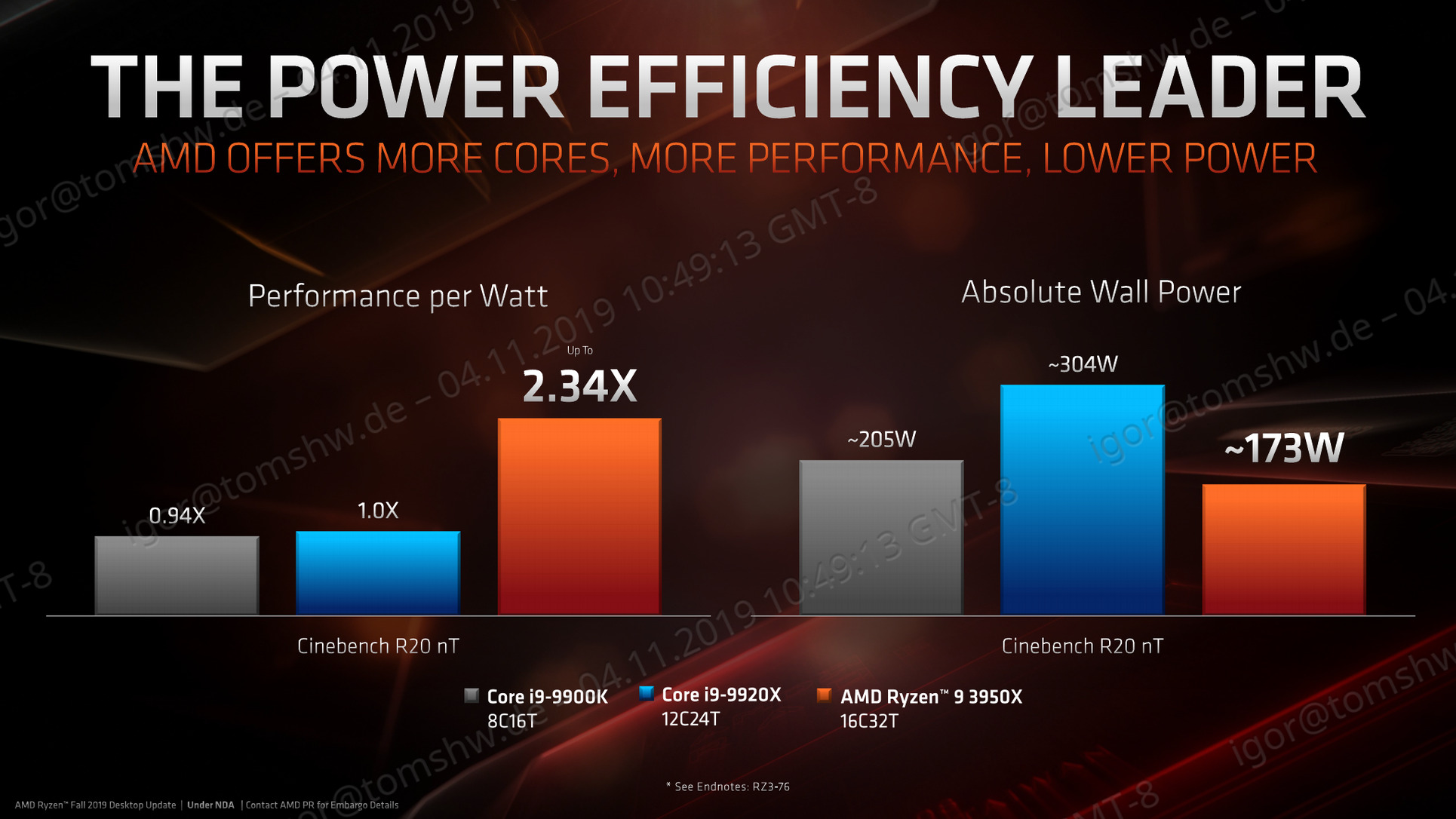