The annual big update is coming up again and so we were also curious to see what AMD can conjure up this time. The installation already showed us that everything is not running smoothly yet, because the one for the pure workstation cards...

The annual big update is coming up again and so we were also curious to see what AMD can conjure up this time. The installation already showed us that everything is not running smoothly, because the package intended for the workstation-only cards could not be completely installed due to incorrect references in the Config file. Despite our immediate feedback to AMD, there was no immediate response to the issue. What a pity.

AMD two or more years ago updated and downloaded for three days, both the Enterprise and Adrenaline drivers package. Both packages can be found directly on AMD's driver download page. The problems described no longer occurred and both an update and a complete reinstallation were possible without any problems.

We will of course deal with some goodies of the new driver software first, but at the end we will also check whether the performance improvements listed by AMD in the Reviewers Guide are also true in this form. This will certainly be exciting, but first back to the installation!

Unlucky on the first attempt? Well, there are probably worse things. For this purpose, the installation file with the abbreviation CWG in the file name went through completely and without any problems. What CWG means or where the difference lies, no one could (or wanted to) tell us in advance, but it stands as an abbreviation for "CreatorWhoGames". Interestingly, our game profiles were automatically available to us, even though the Radeon Pro WX 7100 was actually a workstation-only card in the system. But AMD follows a certain logic here, as we will see in a moment, and it should be more than just a coincidence.

This has its own charm, no question. In addition, one wonders, of course, where the difference between the Vega Frontiers Edition and a WX 9100 will ultimately lie, if the boundaries are blurred even more. In terms of price, the WX 9100 is almost twice as expensive when comparing road prices. If you are speculating with a WX 9100 and can cope with the feature set of the Frontiers Edition, you should strike now (still fast), because the card is likely to expire soon.

But let's get back to the driver first. Enterprise also means first and foremost that as a user in the production area you have to be able to rely on the software in a predictable way in terms of stability, adaptations to the system environment and the most important standard applications. Certified or not, it certainly plays a role, but it is also about investment and planning security, as well as the stable and loss-free operation of the respective workplaces. AMD also switches to a quarterly rotation and fixed driver release dates, so that the resources required for updates can be planned in advance at the customer.

We have already published a few things about ProRender, so that we can limit ourselves to the most important innovations. The outstanding feature is without question denoising, i.e. removing the usual "image noise" in the preview window of the rendering process. Here, real rendering content is mixed with 3D real-time content in such a way that the final image becomes visible unpixelated in certain basic features from the very beginning and then refines more and more. The advantage is obvious, because you don't have to wait forever every time to get a first impression and to get possible mistakes or mistakes. inadequacies.

The Game Engine Importer has also been polished up, so that CAD content can be exported very easily so that it can also be used as a VR project in the visualization. Thus, the boundaries between construction and visualization to virtual reality become even more blurred. It is by no means a gimmick, but uses features and the good performance of modern game engines not for shooters, but also for productive use. Which would have made it clear why workstation graphics cards are also allowed to play the "gaming" part on request. Because not everything that, for example, out of an Unreal Engine, it must necessarily also be a game. 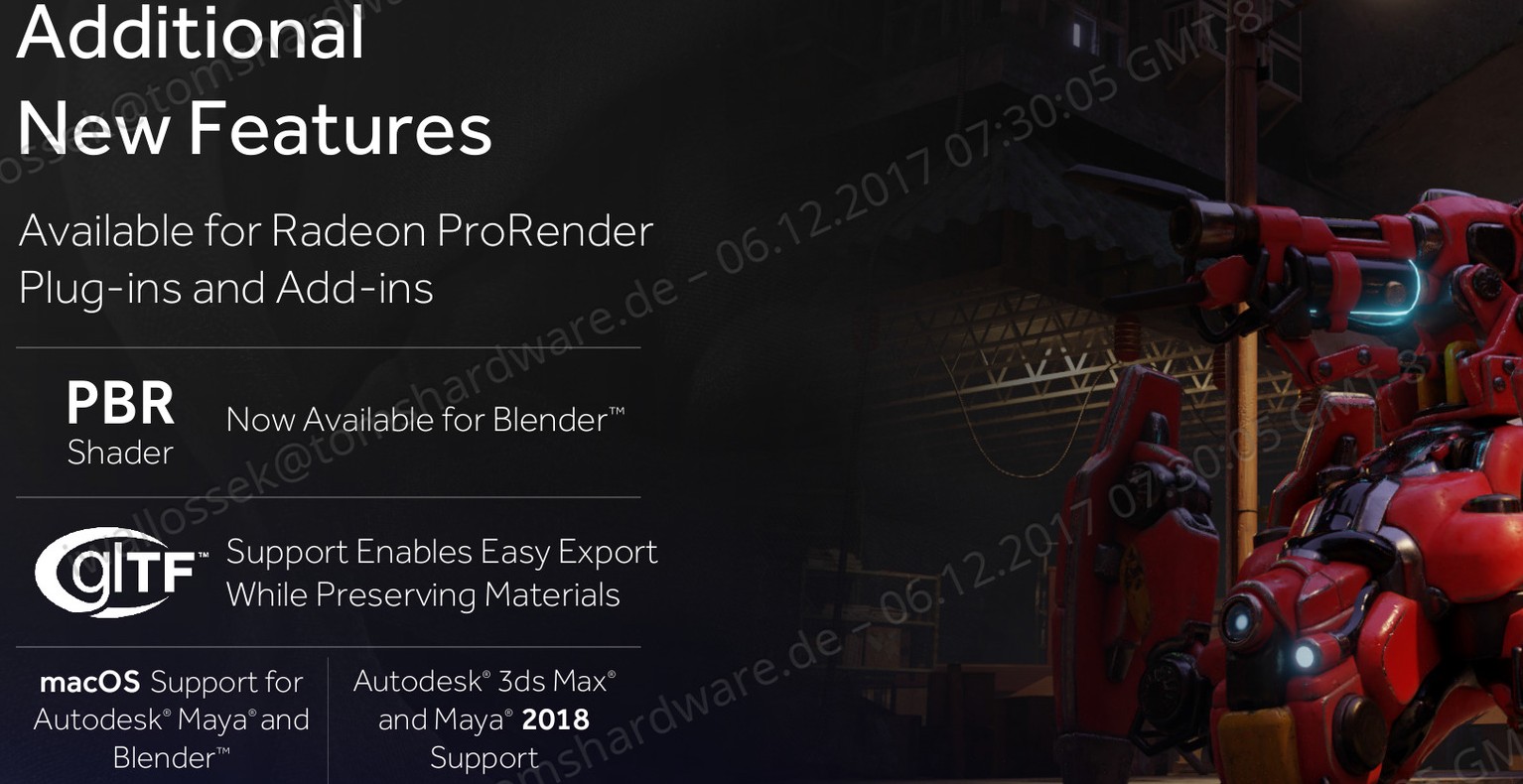 PBR, i.e. the Physical Based Rendering, allows, e.g. instead of the static and artificial Phong shading, use realistic material and lighting models that allow for a much more realistic output of real-time preview. As a plugin or Addin makes it easy to implement the feature into the software – provided a suitable AMD graphics card. In addition to Blender, 3ds Max and Maya 2018 are available on the PC, while on macOS it is still Maya in addition to Blender. In addition, one must also mention Cinema4D, where AMD's Radeon ProRender plays an interesting role. Content creation with decent acceleration.

With ReLive, a feature has also found its way into the workstation sector, which until now could only be solved with third-party software. Saving screen content as a screenshot or video, with or without sound, as well as the ability to save, manage and even share this content online, opens up completely new possibilities even in the production area. The new overlay, up to the display of your own camera and Chroma key, makes many of these options even easier and more convenient to use. 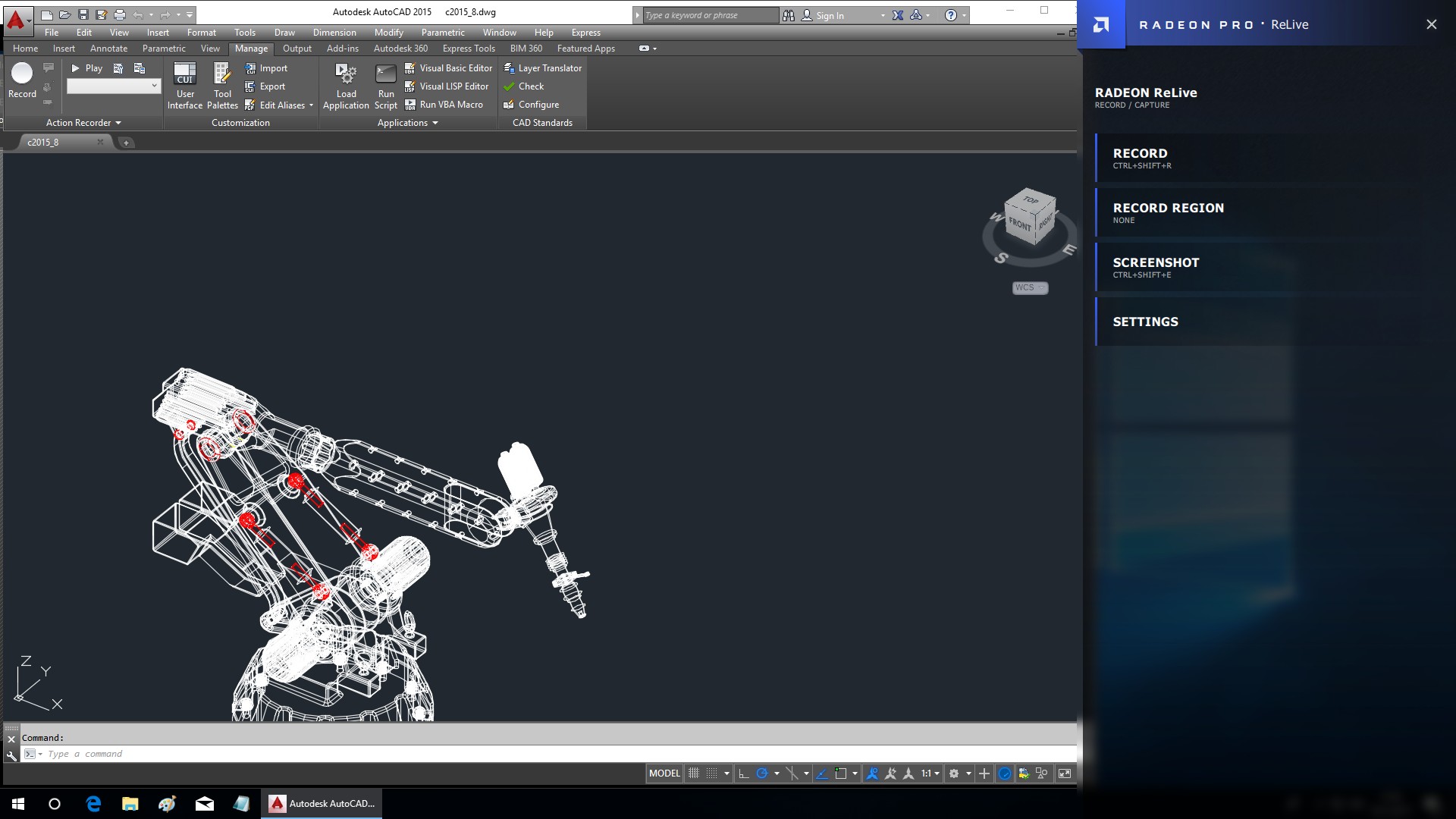 AMD also wants to set new standards in this area and offers real GPU-based hardware visualization with MxGPU technology. Apart from the then possible data security, interesting fields open up for use. And you pack some more features into the open source cosmos, up to the open drivers for the individual KVM host operating systems. On the one hand, this can of course save costs for the user and, on the other hand, it also contributes a little to transparency. Hopefully, performance can keep up with proprietary solutions.

Performance development from 2016 to the present day

The Vega-based Frontiers Edition was also countertested with two drivers out of competition and already noticed that nothing substantial has changed between the launch of the Frontiers Edition in summer 2017 and today. The older driver of 2016 also does not run with the Vega FE, unfortunately. So the real improvements must have happened in the first half of 2017. 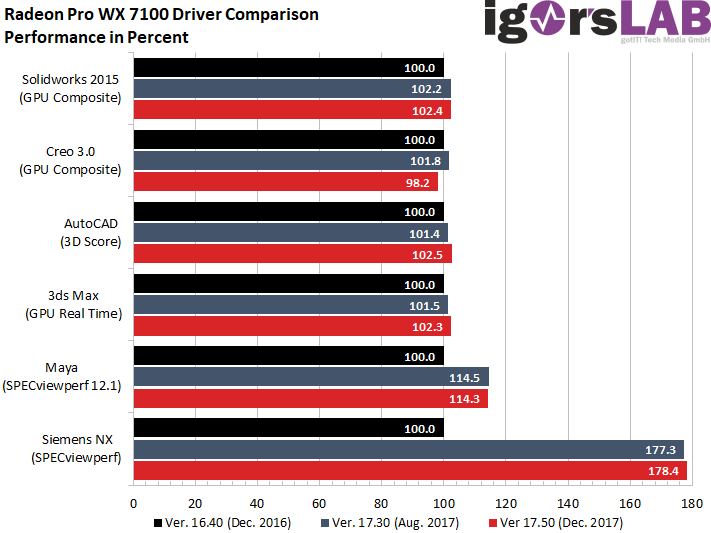 The other benchmarks also revealed that, according to the Reviewer Guide, AMD was able to follow the SPECviewperf benchmark in some areas, but the other changes between 2016 and 2017 were rather manageable. Fluctuations of approx. one percent are normal and thus already fall under the measurement tolerances.

We also find the use of full versions of the applications much more interesting, because especially the freely accessible, free standard benchmarks such as the SPECviewperf always tend to be optimized by the manufacturers over time, because the effort for this also moves within manageable limits and you can advertise with it.

Except for the lap during installation, the driver and the interface can be attested to an above-average development and a meaningful tendency in the further development of the feature set. So it doesn't always have to be the Big Bang to make a driver even more stable, versatile and significantly more user-friendly. And that's what AMD has largely succeeded in doing. The focus of the staff on driver and software development bears first, sweet fruits. And that in itself is worth something as a message: it goes ahead.