Now that the discussions about thermal conduction in AMD's new APUs have made enough high waves instead of the metallic solder, we want to check how AMD's TIM is against a good, conventonal thermal paste and a suitable liquid... Temperatures and power consumption Let's start by looking at the temperatures and stomping - in two ways. First, what AMD is pressing between Heatspreader and Die is already better than its supposedly nasty reputation. And secondly, you can ...

Let's start by looking at the temperatures and stomping – in two ways. First, what AMD is pressing between Heatspreader and Die is already better than its supposedly nasty reputation. And secondly, it is hard to do better, especially since the paste applied in advance to the heat spreader is extremely thin.

The rest is done by sticking the heat spreader under pressure. Since we had carefully removed the original paste and were able to compare it directly, we used a similar amount of high-quality and not exactly cheap thermal paste. The picture after the removal of our conversion was similarly perfect, so also even and thin.

Nevertheless, we were not able to significantly beat the original paste and significantly improve the results even after several hours of burnin. The hotter the APU became, the smaller the distance that was hardly measurable. In addition, both variants with the Boxed cooler run into the thermal limit in the extreme test with Prime95 and the MSI combuster. The replacement of the paste with another, silicone-based therefore does nothing and one must fairly admit to AMD that in the context of industrial mass production and cost pressure, one still has the maximum possible possible out of this option.

The winner, of course, is the conversion with liquid metal, no question. The difference ranges from approx. nine to a whopping 11°C in pure gaming. If you want to be honest, however, the effort for this application is almost exaggerated, because the temperatures are in the deep green range one way or another, even if you overclock our system as in the launch article. It only becomes critical with (rather unrealistic) stress tests. The liquid metal variant then achieves up to 17°C in maximum. 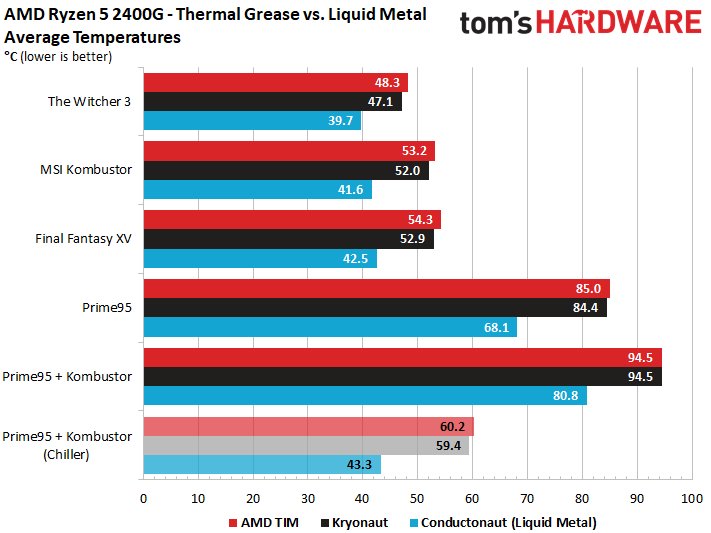 Liquid metal therefore only makes a real sense when moving in the absolute boundary range. Otherwise, it is rather the category "Beautiful Living". The Boxed cooler is hardly quieter either, because the up to 135 rpm less in normal operation do not change much in terms of the noise background we judged in the launch article. Under full load, it is even only approx. 40-50 rpm less – hardly distinguishable.

However, the conversion would definitely be worthwhile if, on the one hand, one mounted a quieter cooler and packed the whole construction into a rather thermally unfavourable, because very small housing without large airflow. Then the temperature difference achieved may make exactly the difference between a run or one is not running.

Those who depend on this point are therefore welcome to dare. Everyone else should not cry too loudly and long after the lost lot. The competitor does not do it any other way and even delights enthusiast CPUs with TIM. AMD, in turn, intends to continue to solder this in the future. Let us hope that we will keep our word.

The corresponding power consumption is to be regarded as identical for the two conventional pastes. The game with the decimal places is still within the tolerance range, even if we used a very long period of time after the actual warming to determine the average values. There is always a bit of a shrink, so you have to stay honest. 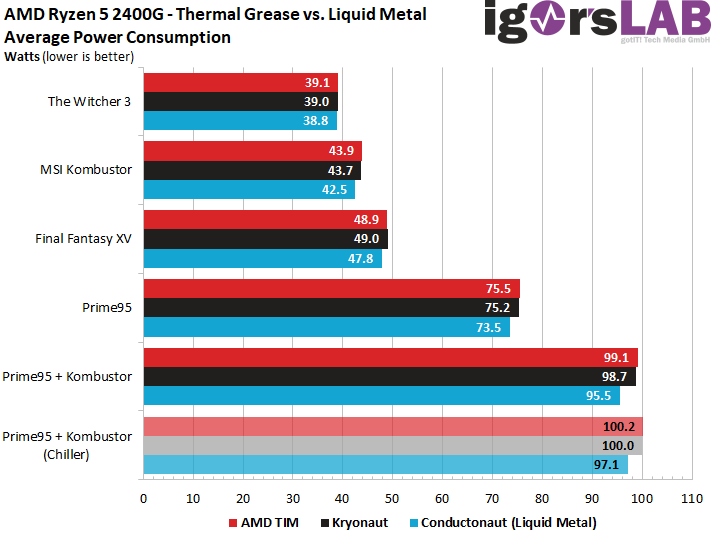 Only with the clearer lowering of the temperatures can the power consumption drop somewhat. A maximum of three watts in the extreme test is not exactly the world. However, if the CPU hadn't rotted, it would probably have been a bit higher. Up to the stress tests, CPU and GPU clock sway almost the same, which is why we have dispensed with the many curves. In no case does one gain significantly more clock speed and even in the stress test the APU with liquid metal does not increase 75 MHz on average. This, in turn, is not really noticeable in everyday life.

Yes, the conversion worked and yes, the good old liquid metal shows the pamphlet siliconitis once again the very thick finger. It's just stupid that you're not going to need it in this way. The achievable added value is very manageable, because the APU is neither significantly faster nor significantly more economical.

It only gets much cooler, but the Boxed cooler can't turn this into real restraint without putting your hand on the fan profile. Effort, risk and benefit are extremely far apart and one should only play with the thought and razor blade if one wants to squeeze the system into a poorly ventilated hare barn.

So, now you can scold or pat AMD on the shoulder. Accountingly, the bill is perfectly positioned, but customer-specific emotions and sensitivities are not (consciously) priced in. But will Kevin-Klaus Normalkunde ever think about Lot or dead in a ready-made PC? To do so, he would first have to know that one could also argue about such things. From this point of view, the paste fits and everything is in the balance. At least with the APUs and Lisa's cash register.