With the Orcus 240, Raijintek leaves the paths of the usual pump positioning, which has now really been trampled out, which also provided food for various, but quite trolly patent attorneys. Not on the radiator, not in the... Exploring the maximum TDP upper limit Now, of course, you could go down the path of least resistance and interpret the test on a CPU with a maximum of 100 to 130 watts of heat dissipation. Nice for possible permanent chart comparisons, bad for the buy... 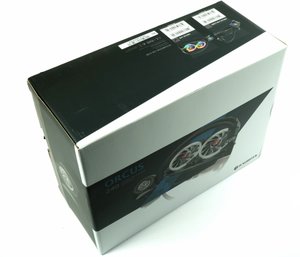 With the Orcus 240, Raijintek leaves the paths of the usual pump positioning, which has now really been trampled out, which also provided food for various, but quite trolly patent attorneys. Not on the radiator, not in or not on the radiator? Well, there is not much left.

And so you elegantly dodge the hose as a potent pump carrier and beat two fat parlor flies with one flap. We'll see why this gossip isn't a mistake.

Triton was yesterday, including all material and therefore durability problems. Now everything is really going to be different. Really? Let us be surprised! Other supplier, new luck. Can work if you only approach it carefully enough.

Let's see, because if we're really honest: a whole 109 euros incl. Vat. for a 240 AiO with two RGB fans and controllers with radio remote control or Mainboard control and an integrated hub for up to 8 PWM fans are a really fat battle announcement.

Let's tackle it and get it done first. The actual all-in-one cooling is delivered completely hosed and filled, which makes it very different from the open-loop construction of the Triton. The reasons are obvious, because all too often the pump housing broke, because inexperienced or overzealous fingers tightened the connections far too tightly. And whenever it got really exciting, it just cracked. Plörre outside included.

To match this, Raijintek supplies two 120 Full RGB fans of the Iris series, which are (should/can) connected to the RGB controller, which is also included. The same applies to the illumination of the pump housing. In addition, there is a real radio remote control, if the motherboard does not have an RGB output and of course the required cables. Then there was the mounting kit and a nice vial with an odourless eau de refroidissement to, if necessary, refresh the level a little.

The fact that you don't get a full copper statuette for the ancestral gallery for 109 euros should already tell you logic and reason. But the competitors are not in a better position and it is important once again to use the right coolant and to exchange the liquid completely at some point, before the mucus and other secretions thicken the inner workings like shders. Corrosion by galvanic magic tricks after crossing the Coolant life peak included. In detail, this means that the cooling block is made of copper and the radiator is made of aluminium. You have to live with the bomb at this price. For certain consequences from this responsive constellation, Raijintek is one of the few suppliers to offer a solution in the form of a plug that helps to drain the germ while leaving the refilling and filling option open. The condition of the interior filling is just as good as this can be seen in the pump housing, including the current level. This, in turn, is rare on the market and very helpful in this form. The rotating propeller, on the other hand, is merely a show object, which at least indicates that the blubber is still moving finely. The faster, the more. And also in colorful.

The fact that this level does not decrease too quickly has been taken into account with the 36 cm long hoses (including the pump and connections), because behind the black textile sheathing one wants to have used thicker material, which is less shrinkat. Caused. To what extent this is true, however, we cannot test or estimate in such a short time. But since we already had AiO cooling in the archive, whose inner workings could no longer be described as usable after only 2 years, every free care note is particularly noteworthy. By the way, the Raijintek Orcus 360 offers 40 cm gross as length for the hose, that should really be enough.

The pump and its special features

Every water cooling lives on pump, with all possible side effects. In order to exclude any patent trolls from the outset, the pump housing is now in the hose. The distance to the radiator should also be sufficient to get all necessary bends pain-free and collision-free.

The advantage of this positioning is the de facto complete decoupling of the rotating parts from the overall system including housing. Body sound is smoke from yesterday and also the intentionally chosen pump speed of approx. 4000 rpm is a productive component here. Frequencies around 2.5 to 3.5 KHz are noticeably more concise for the human ear, so that a reduction in the speeds for the subjective well-being of the user could hardly bring anything. 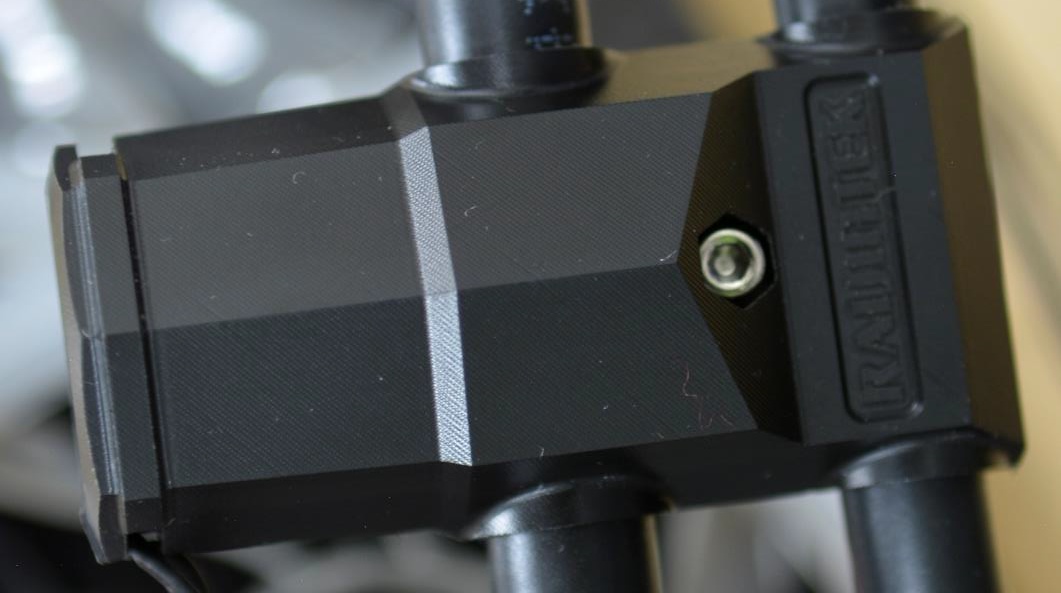 In addition, the pump still has some air up and does not run at full power. The normally attached 80% of the possible maximum speed is sufficient for the optimal circulation. Further manual reductions do not improve performance and it will not be (even quieter). Because one thing has to be certified to the pump and its positioning in fairness: you hardly hear it or you can hear it. when other sources also generate operating noise. It is, in terms of the pump, one of the quietest AiO solutions we have ever been able to measure. Raijintek offers a round-around feel-good package with customizable colouring, relying on 120 mm fans of the Iris series. Although they are not the absolute tip of fan evolution, they are quite usable and also offer sufficient static pressure. So the fan power will not fail, we have measured that. The noise is at least acceptable if you don't want to cool down an open fire with this AiO. The readings on the next page will confirm this. 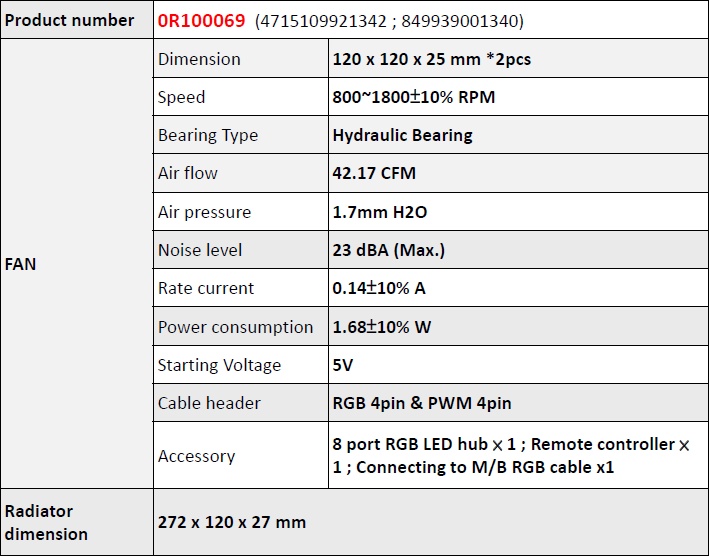 All in all, it is therefore a colorful and even somewhat quiet air fun, in which one should also keep the price as a bar in mind. After all, there are also significantly more expensive and yet not better air-iusses. The supplied stroke for up to 8(!) customers (other fans, RGB consumers such as cooler housing, etc.) offers two features for color players from the Bundesliga. Either, you simply plug it into the RGB motherboard output using the enclosed cable (if you have one) and use the default settings of the rest of the system, or you simply mix the desired color yourself and in turn you can apply other effects to the Press eye. 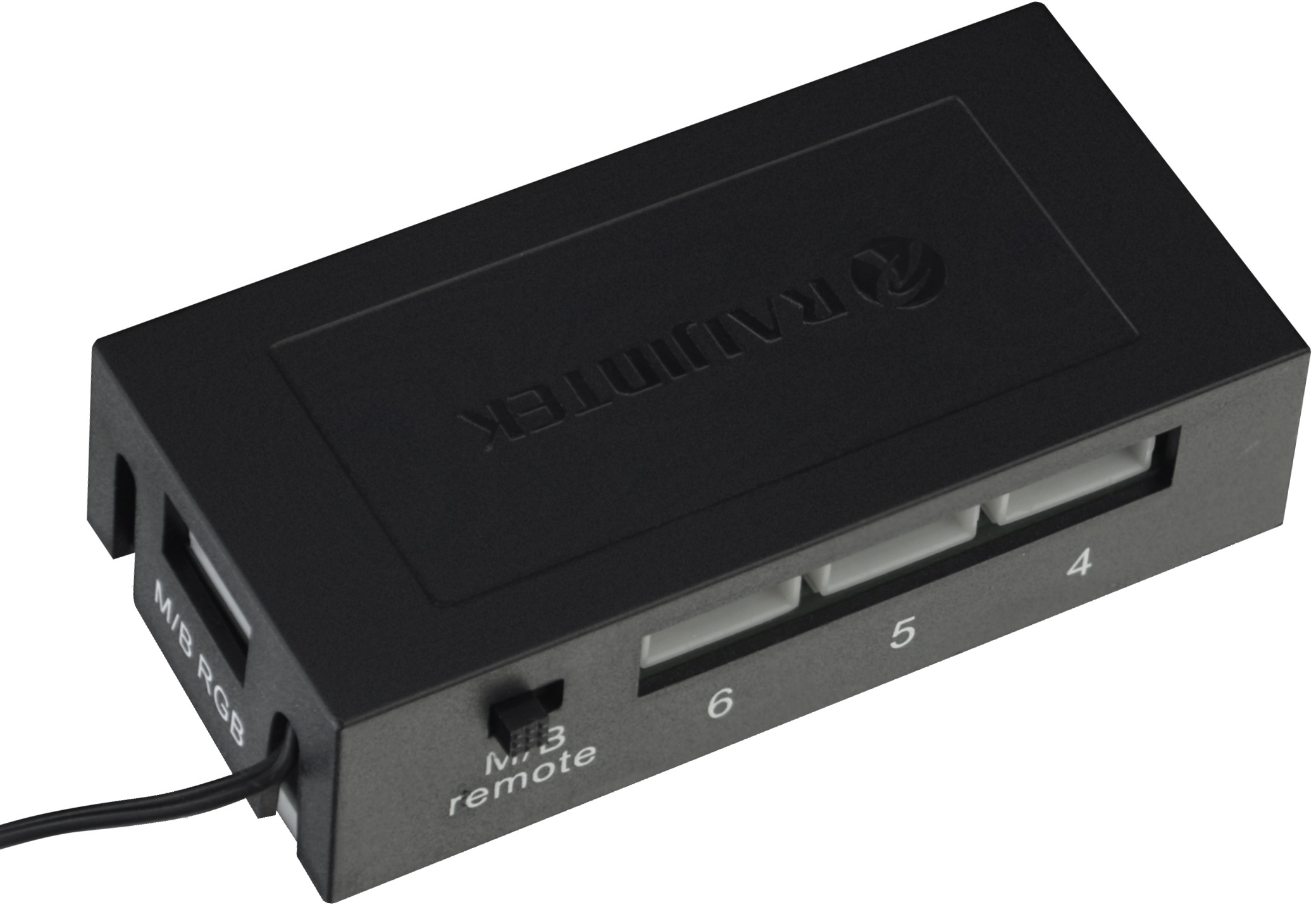 The radio remote control, which allows various color modes or color gradations, is available precisely for such toys. Radio because you can hide the hub invisibly in the depths of the PC universe and still reach it remotely. However, we had to use the battery ourselves because our sample came by DHL and air freight. New EU directives and transport regulations, we love it. However, the customer does not have these problems. The good old sea freight by container is not yet dead-regulated in this respect. at least.

Enough of the dry exercises. Since everyone wants to know if she is doing what she should and how, we are of course testing the part now. After scrolling on.