Once we’ve taken the case out of its outer packaging, exercised our arms and freed the actual contents from all the protective foils, it’s hard to stop being amazed, despite (or because of) the sore muscles. Because what stands in front of you now is an astonishing amount of housing including space to install various devices. Also here I do not want to withhold the photographic round trip from you of course, because it is already impressive: 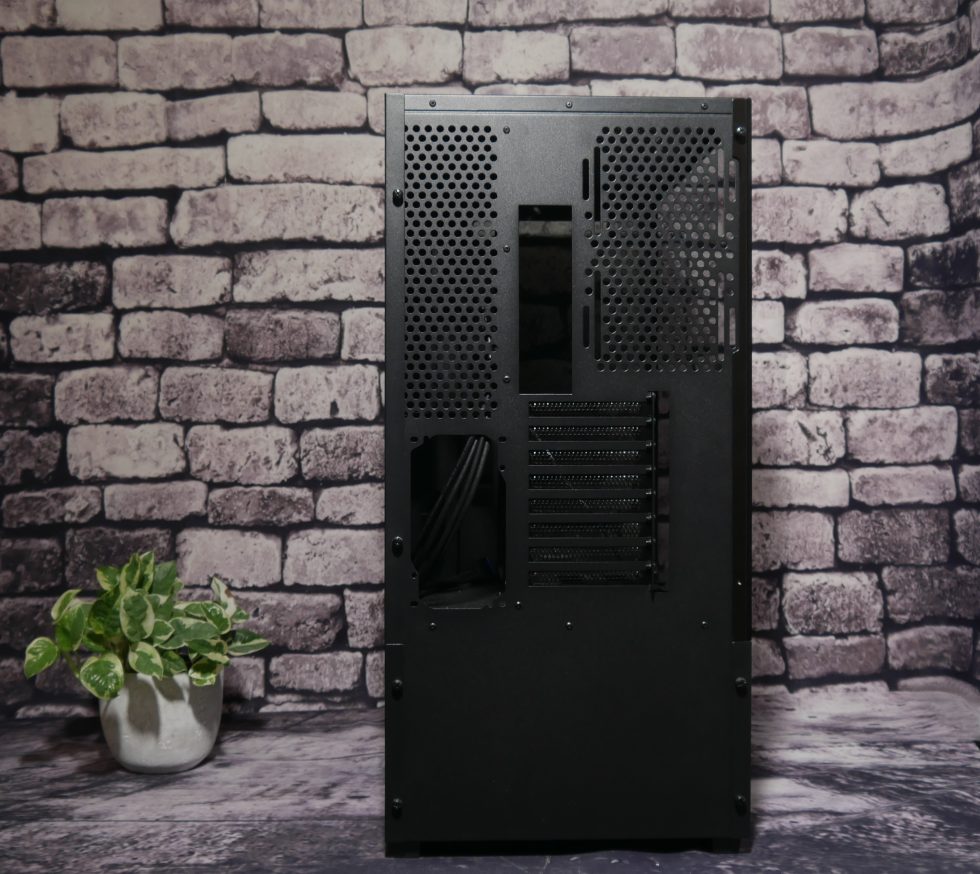 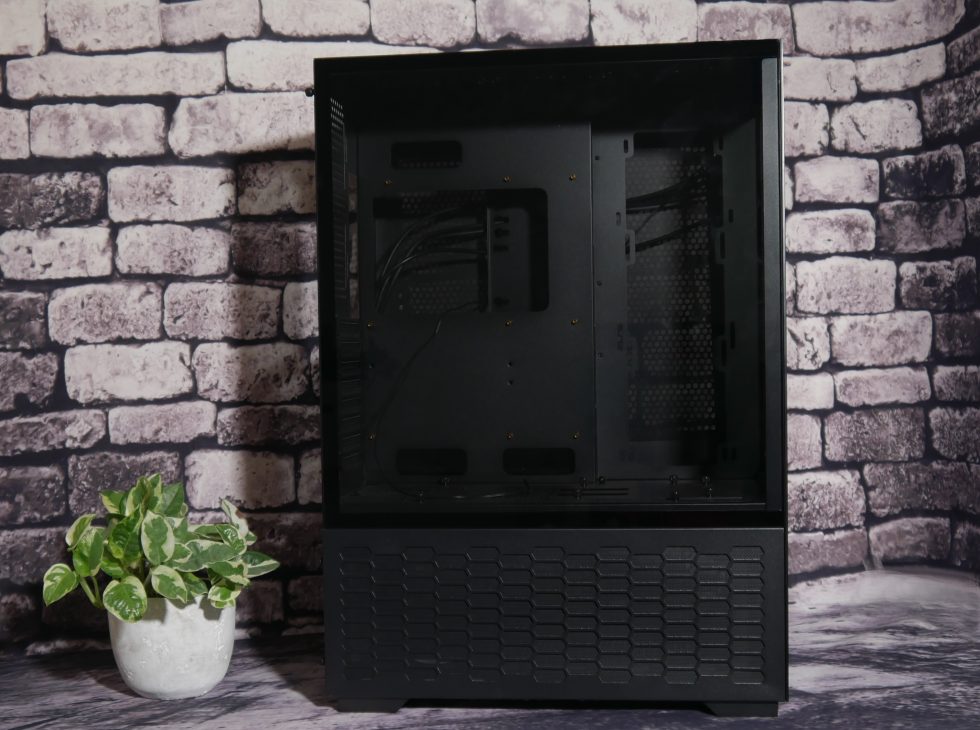 First, we remove all the panels to look inside. This can be easily disassembled using thumbscrews, as with any current case. Once you have removed the panels, you can immediately see how much space this case offers and how well the whole thing is ultimately made. Sharp edges or wobbly metal in can style are not to be found here. All edges were also excellently folded over and finished or deburred. After all, that’s what you’d expect from a case that titles itself with the word premium. Check.

However, at least at this point you should make sure that you don’t install too thick radiators, otherwise you will collide with the graphics card unintentionally. And while we’re on the subject of the graphics card: The paean has no possibility or option to install it vertically. Personally, I’m not a fan of riser cables anyway, which already fail grandiosely with PCIe Gen. 4 and for which there won’t be any real representatives any time soon, at the latest with PCIe 5.0. 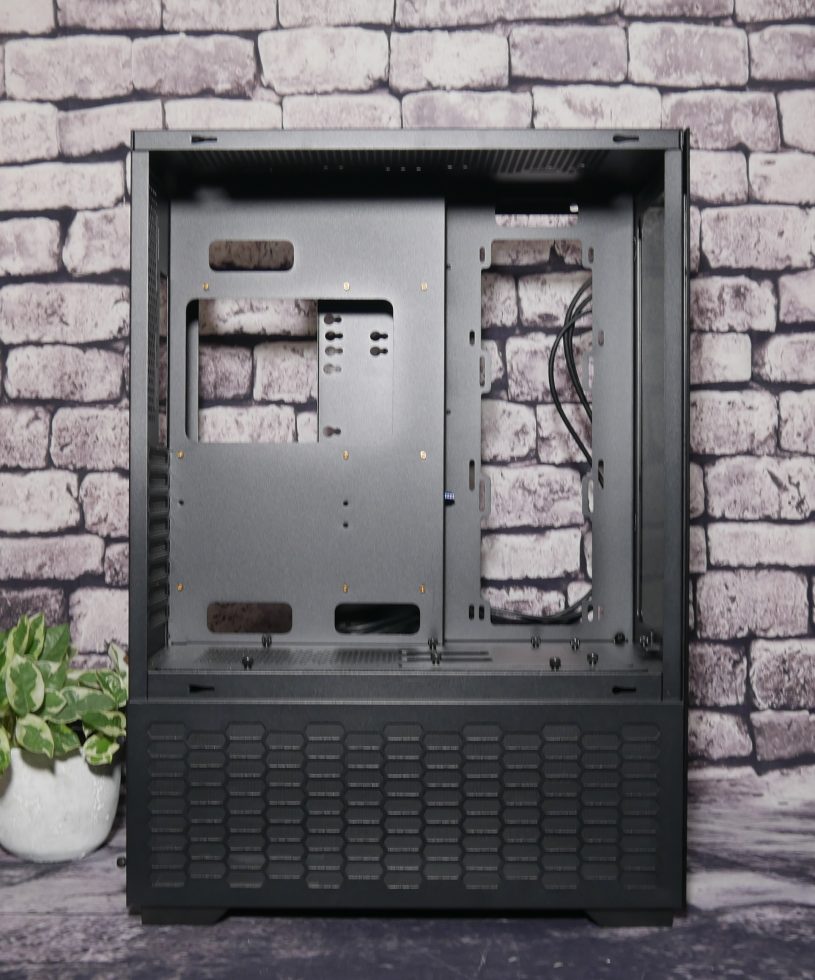 Next, let’s take a look at what makes this a decidedly water cooling case. The lower chamber is strictly separated from the upper chamber (where the mainboard is located) and it offers space for two 360 mm x 45 mm radiators with a total of six 120 mm fans. This has the advantage that the exchanged heat does not additionally heat up our hardware and thus we get more cooling capacity.

What I also like very much is that Raijintek has installed a plate here from the lower chamber to the top, with which the tubes can be easily passed through or laid upwards and that the recess offers enough space even for thick 16 mm tubes. Unfortunately, there is also a minus point here. Raijintek didn’t think of a grommet to invisibly integrate the fan cables into the rear chamber where the PSU is located.

If you really wanted to control everything with a fan hub, there would be no direct way to do that. This means in the final consequence that we have to become active ourselves and drill a hole to lay the cables cleanly and invisibly. This may certainly not be an extreme problem, but it is still unnecessary and thus a cause for criticism. 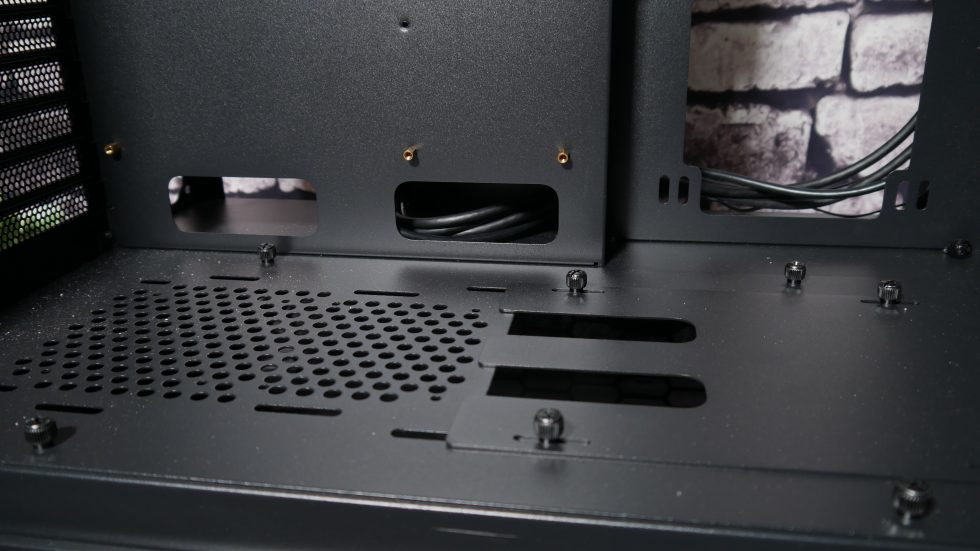 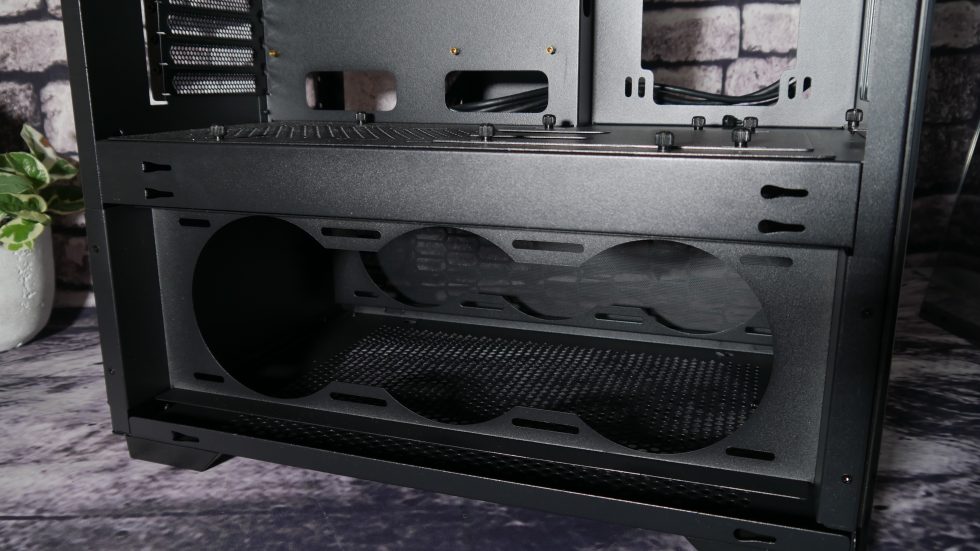 Now let’s take a look at the rear chamber. Raijintek gives us a lot of space here for neat cable management. So we have plenty of room to hide fan hubs, controllers or anything else. In the middle there is also a plate, where we have the choice of either two 3.5 HDDs or 2x 2.5 SSDs to accommodate; of course with the appropriate decoupling rubber. A standard power supply can be installed vertically on the right side – there is nothing else to see here.

What I like here again is that the rear chamber is very well ventilated, as there is a generously perforated plate above the PSU. The back panel has also been perforated so that the warm air is easily pushed out of the case. Raijintek has also done everything right here. Airy is very trendy anyway. 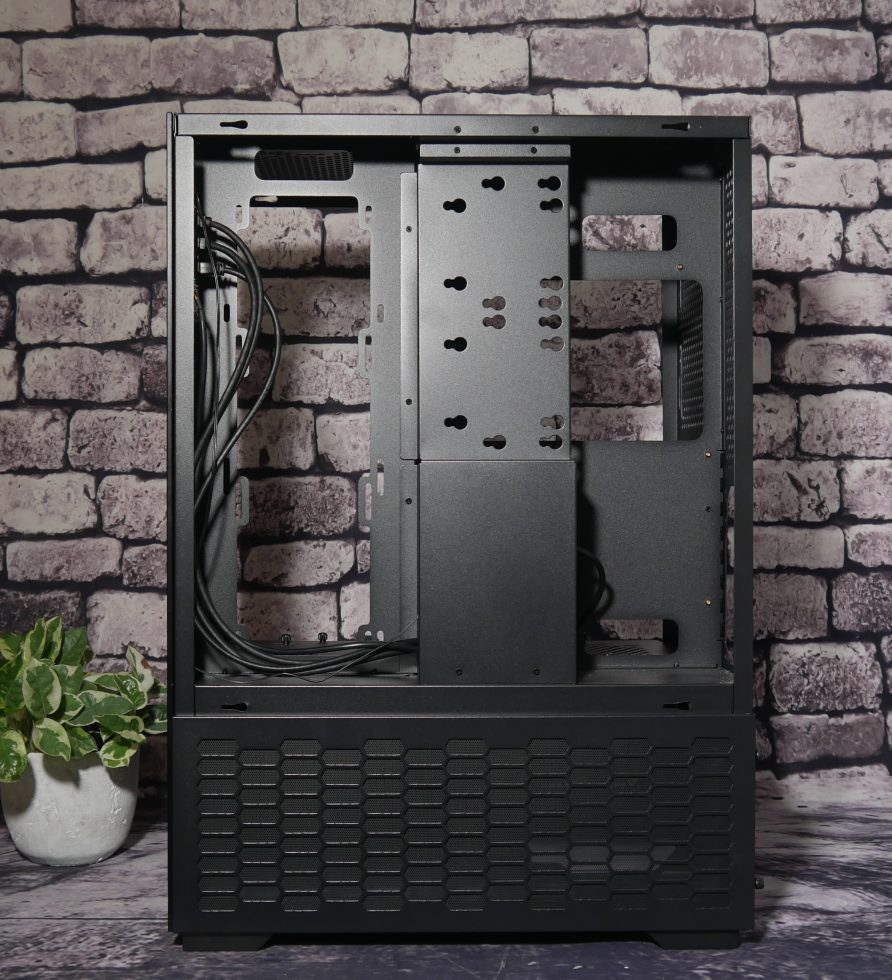 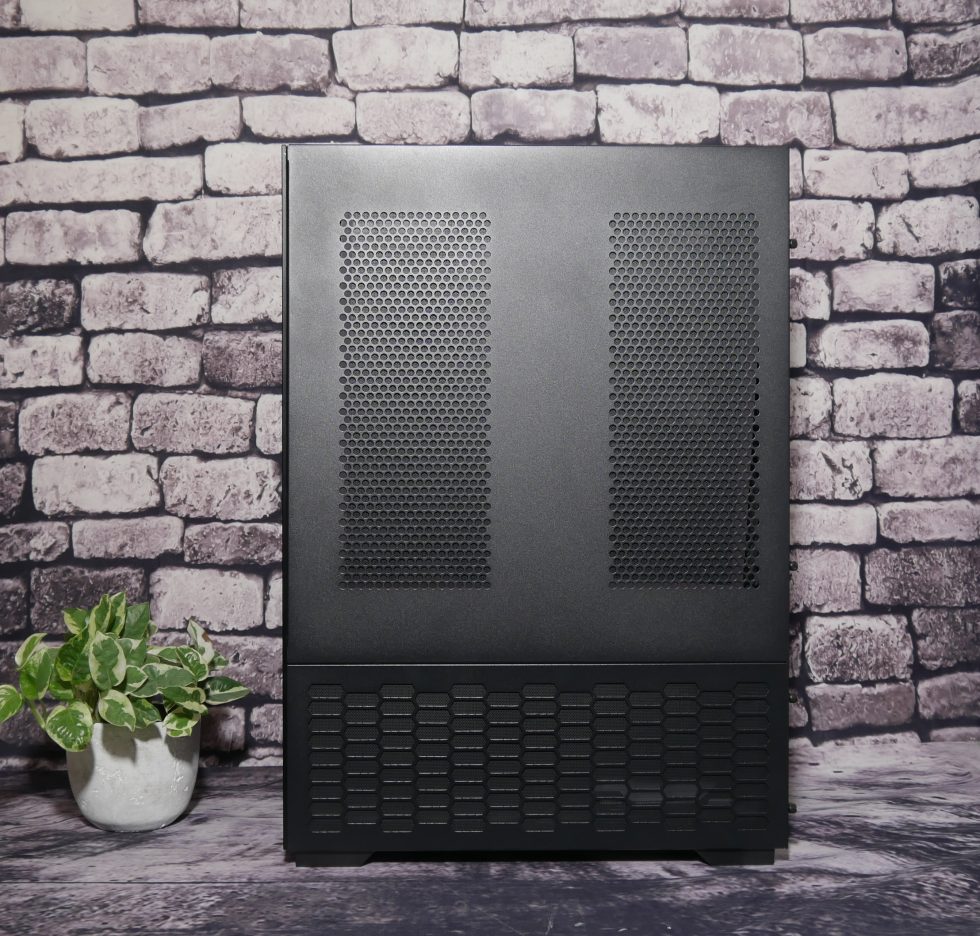 What would additionally be worth mentioning is that except for the rear fan, which mostly blows outwards anyway, there are also magnetic dust filters everywhere. However, there is a small reason for criticism here as well, but it is purely related to the aesthetics. I would have liked the dust filter on the case to be able to be recessed as well, making for a seamless transition on the lid. With the current, somewhat protruding solution, it disfigures the otherwise so perfect overall picture then but something. 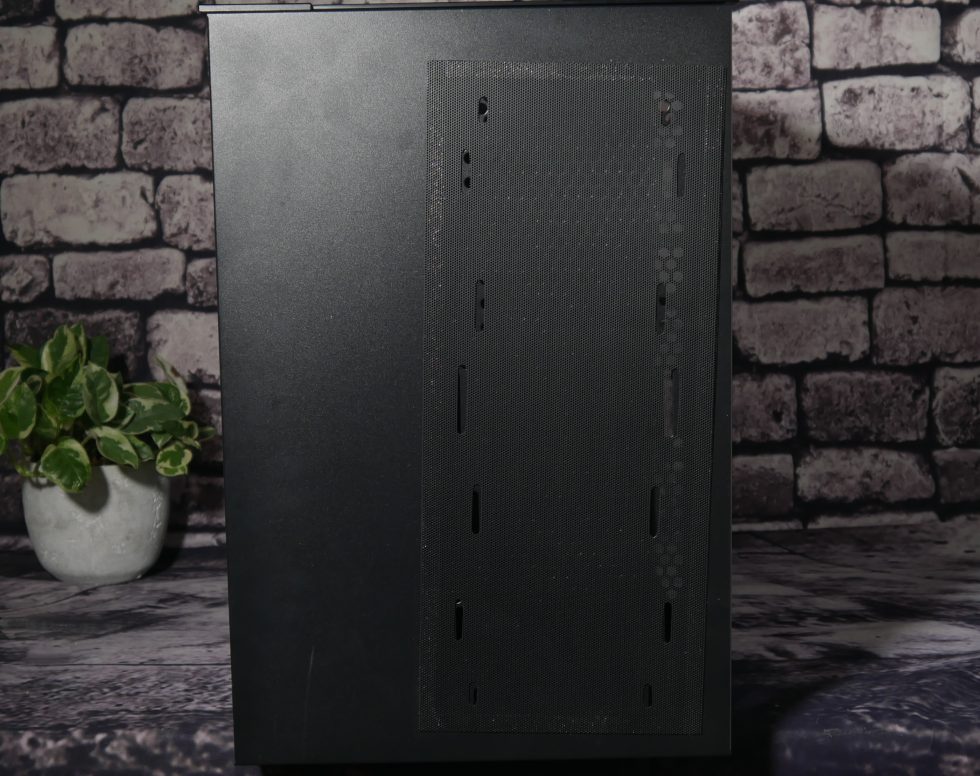 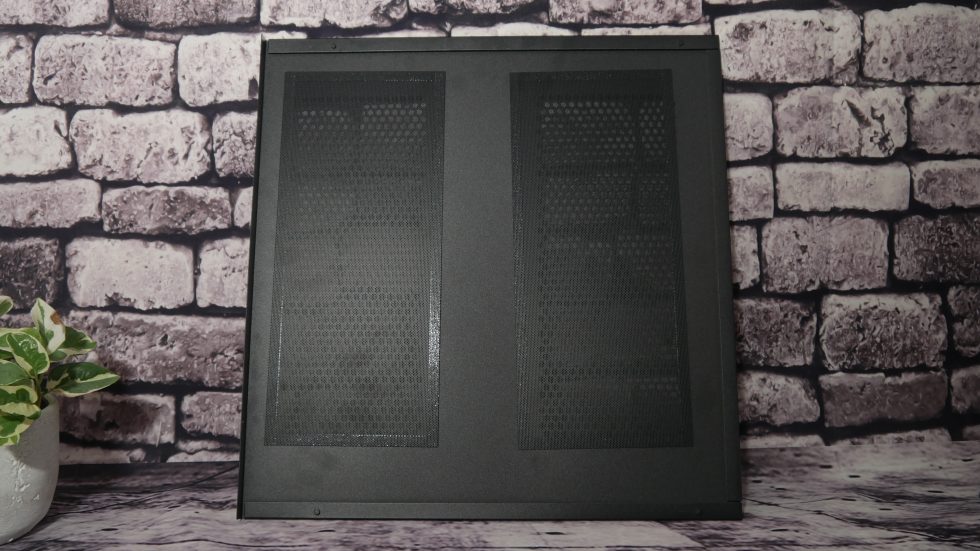 2D power in reverse? A comprehensive analysis! | Retro 10 years ago
CORSAIR SABRE RGB PRO Wireless Review – The gaming mouse that can do everything?