Decided try MPT one more time (no more!): I undervolt rx6800m tonight by 40mV when I woke up, I turned on the laptop from cold off, windows 11 opened on, second later external monitor which is connected via type c turned black and short after internal too and rebooted. After reboot rx6800m was missing from task manager but was listed in device manager I randomly selected latest newest driver from drivers list and reapplied, in middle of windows trying apply the driver it has rebooted, now I see rx6800m in device manager as alive without "!" And rx6800m back in task manager, but rx6800m in crate said something like deep sleep mode or something, and even if I opened gpu-z stress test it didn't wake up. I then DDU and reinstall the driver and all back to normal.... What has just happened??

I got one more theory
when i booted up this morning
when external monitor turned ON
GPU tried check its boost speeds or something
got no enough voltage
choked up
turned itself off
laptop shortly after reboots
turned into windows with dGPU driver has "!" and not appearing in task manager
so it disabled itself for protection
and only way relive it was full Driver reinstall

\\\ Final question, this article says undervolt can cause damage:
https://electronics.stackexchange.com/questions/65824/can-electronics-be-damaged-by-undervolting-it

No clue if the MPT works for the mobile GPUs.

However, when looking at your first question, I guess you have actively deactivated most of the features. At stock, almost all checkboxes are activated for the regular 68XT: 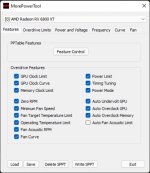 Maybe card and driver can't handle deactivation of almost all features - I haven't seen your setting before - and I'v seen many wild things done with the MPT.
Can you reinstall your current AMD Adrenaline driver or install any other one? Normally the "SPPT @ Win Registry" which the MPT does change is reset after driver installation. So don't reinstall via the devoce manager, but just download the right driver from amd.com -> support then install, then reboot.

Regarding your secound question: nobody really recommends to touch/use the curve. All other settings are much more transparent and (normally) lead to more stable settings, but the curve remains to by confusing.


I personally do not believe thast the -50 mV cause your troubles but the features may. UV by 50 mV is no issue, many undervolters are running the card with even less voltage, but most of them use either the slider in wattman or set the values under the "power and voltages" tab - almost nobody uses the curve tab.
In general I think you will not kill your graphics card by undervolting. And you have not killed yours, because you see an image, even if the driver seems to make troubles. As your Ryzen has no internal GPU, your Radeon works - if it would be dead, you would not see any image. So, you haven't killed you GPU and you won't kill it by undervolting. However, if you set the coltage min/max too low, it might no longer start/prompt. In such cases (I haven't experienced) I heard from guys who then boot with another GPU and use the undervolted one as second GPU, then raise the voltage again via MPT (it can recognize all GPUs physically installed), drop the second GPU and boot with the orioginal one again. Shouldn't be a big deal on PCs - but I have no clue if you could do this on a notebook - so I'd rather be careful with UV or OC on notebooks.
R7 5800X ✵ 6900 LC ✵ ✵ Lüfter ✵ Navi 21 Max OC Tutorial ✵ Alt-GPU OC ✵ SuperNova
Upvote 0 Downvote
R

Thanks for the detailed answer,

1. This is mobile 6800M (basically 6700 XT renamed and made into a mobile gpu)
2. All features disabled by default it was not me who disable it
3. One guy on reddit with same laptop used curve to undervolt so I followed his guide
4. This laptop has ryzen 5900HX cpu with iGPU so when rx6800m was temporarily off, I could reinstall drivers and fix it thanks to the igpu
5. So the curve undervolt is basically same undervolt feature and cannot harm or damage anything, right ?

Thanks a lot!
Upvote 0 Downvote