Question 5600XT BIOS flashed with mod from Red BIOS Editor, there is an issue

Hello and thank you for everything. Currently, I have a 5600XT in which I have flashed the modified bios by Red BIOS Editor. However, the BIOS did not work, the system hangs during POST. This is no problem, I am used to flashing BIOS with SPI Programmer CH341a, I am free to test anything.

I think maybe this did not work due to the fact that my card is dual BIOS, and when I read the BIOS from the memory chip, it comes out with 1024kb, rather than the 512kb saved from GPU-Z. When I try to open this extracted BIOS with RBE, it modifies fine, but does not save by stating "An unknown error occurred when accessing (filename path). This is not a permission issue, I am running admin. It works fine to save the file when I use the GPUz extracted rom. However, even with the 512KB file, it does not work to post the card.

I have tried several things, the last one was to make only a very small change on the GFX Maximum Clock to 1900MHz. It still does not work. I originally made a BIOS with a lot more changes and limits, such as 2100, 1000 memory, more power, voltage, etc, etc. but decided to make a small alteration to see if it would work-- unfortunately it doesn't.

I have also tried to open in HxD the original long file 1024kb and noticed it makes no difference, because after 000FFFF0 it is only 0's anyway. Also, in HxD, I have tried to open the original stock BIOS and overwrite the part, leaving the correct file size, but this also did not work to POST. Stock BIOS still works fine when re-flashed, card is perfect.

So, I am leaving a link to my files, to see if we can figure out why the modified BIOS is not working on my 5600XT.
Here is the URL: http://xonedigital.com/BIOS_etc.zip
on this ZIP file, there are the following:
1 - 5600xt1_gpuz.rom (Original BIOS from the card extracted with GPU-Z)
2 - 5600xt-stock_extract.rom (This is the BIOS file extracted from the Chip with SPI Programmer, it loads on RBE, but fails to save)
3 - mpt-1900_only.mpt (This is an example of a small change I tried to see if it would work, only changing maximum clock to 1900mhz)
4 - 1900-ONLY-BIOS1.rom (This is the final outcome of RED BIOS EDITOR using the GPU-Z BIOS with the MorePowerTool settings of 1900mhz)

I hope this helps, thank you so much for all your work again and let me know if anything else is needed. I am really looking forward to free up the power of this 5600XT

You are welcome.
Upvote 0 Downvote
V

Thank you for your work. I work also on sapphie pulse 5600xt but with redpanda bios.I can achieve little more 44mh/s at 1860MHz with other timing but i have some issue. My card is stable sometime for some days, sometimes only few hours.
I think redpand bios isn't better for sapphire.
I want test your bios with my timing and your powerplay table and the good bios for sapphire.
Apple timing is good but not the best. I try a mix 1550MHZ strap and apple timing to 1800 and 1875MHz.

I want play on features with your bios(acdc activate is good idea and desactivated all Vrhot). Sapphire have a security. I can have more 1860MHz but GFX reset at minimum level. So, this card can achieve between 45-50MH/s but we need find where is all security for mining

PS : Sorry for my english.
You are the best for unlocked bios!!!! I try this since long time for sapphire.
Upvote 0 Downvote
M

Please if I ever forgot to fulfill a request or it did not work well for you then do remind me and I will gladly fulfill it or provide another solution,

You may have a good day, 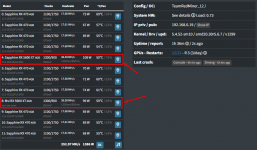 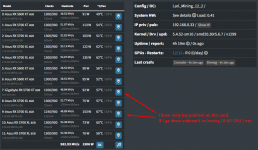 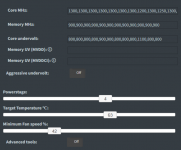 Hi i have the same model than yours, can you sent me your unlocked bios ?
Upvote 0 Downvote

I will update you after I finish whenever it is possible.
Upvote 0 Downvote

Hi @Mini_Motz When you have time could you check my settings?
I'm in trouble
Upvote 0 Downvote
M

artolive hat gesagt. :
Hi @Mini_Motz When you have time could you check my settings?
I'm in trouble
Zum Vergrößern anklicken....

For your RX 5700 XT and non XT cards please check the guide in the kindly attached link below,

Hi, I am failing to update Gigabyte 5700 XT. The same procedure updates the BIOS on MSI cards with no problem. I follow the instructions on Igors Lab. The sign of having trouble with the card bios flash shows in GPU-Z. After flash using amdvbflash the values of GPU and memory frequencies is...

For your 5600 XT cards I will unlock it for you and then you can use the guide provided above for non XT with the only changes below,

Send your card vbios backup and even if it does not have Micron memory type still I may be able to help in unlocking your vbios for modifying, however it might take a bit of time.
Zum Vergrößern anklicken....

Hi all,
I have 3 diffrent AIB gpus that i would like to use for mining but cannot unlock them, can someone please help me unlock them or mode them for mining(lower voltage limit and custom straps)

Power consumption when card is idling(not mining) from wall 71W, when mining 170W

My question is, since that guide is for 5700 gpus, can I go lower with core clocks and voltages since it has only 192bit bus width(maybe no need for 1235MHz core)?

can I try to use custom straps with diffrent tref value)?

Power consumption when card is idling (not mining) from wall 71W, when mining 170W

My question is, since that guide is for 5700 gpus, can I go lower with core clocks and voltages since it has only 192bit bus width (maybe no need for 1235MHz core)?

can I try to use custom straps with diffrent tref value)?

Please use the power limit below,

You are welcome.
Upvote 0 Downvote
J

Greetings Mini_Me can you please unlock my vbios for my Red Devil 5600xt's? They are used for mining. Thanks in advance!

[For optimal hashrate, keep the gap between the core clock and memory clock at 480 MHz]